Back to tales
Bird facts
,
Birdwatching
, 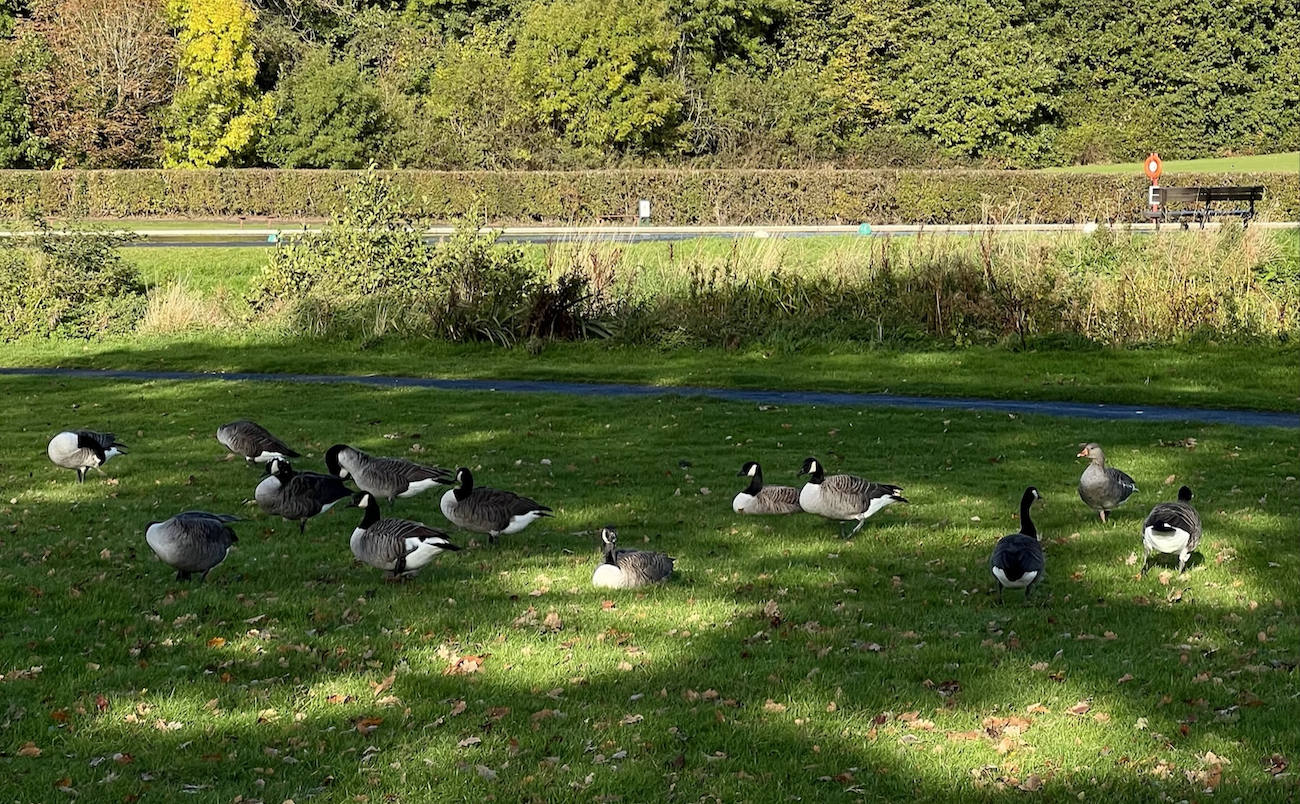 On my daily walks to my local duck pond in a British suburb I do not expect to find much out of the ordinary. I see the mallard ducks and some tufted diving ducks floating on the surface of the shimmering water as people stand by watching them. The flock of Canada geese are usually busy eating grass in the nearby field. However they seem to have one flock member who looks different to them.

In a sea of black and white feathers and black bills there is a splash of orange from the bill and feet of a greylag goose. At first I thought it was a passing goose who may have stopped off to re-fuel before moving on to its own gaggle. After observing this goose for several weeks it seems that he is here to stay as a flock member. We ended up calling him Greg but I wondered how he found himself living with a flock of a different species. Is he even aware that he is a different species? Do the other flock members treat him as their own?

Mixed species groupings are actually common in birds. Small birds who feed on insects in the trees are at risk of predation and might benefit from foraging together with other species. Some mixed-species flocks can last years while others just a season. In tropical species where the environment is mostly stable, not having large seasonal changes, it is common to find flocks of insectivorous birds with 2-30 different species members living together for many years.

Each species even has separate roles in the flock. There can be a species that takes on the role of “look-out” who will produce alarm calls when they spot predators. To make it worth their while, they sometimes make false calls when they want to steal some food from the others. Antbirds usually take up this sentinel role. Whereas other species, such as antwrens, search for insects and flush them out. In more temperate zones species might band together especially in the colder months.

When their energy is focused on conserving their body fat to make it through the winter and not on finding a mate, they can be quite lenient about who they hang out with. In fact they may benefit from joining forces with other bird species; extra eyes to find food and spot predators. In the UK you may hear the cacophony of high pitched repeated calls from long-tailed tits as they pass by in their groups with other birds from the tit family.

In the case of Greg, she/he (it is difficult to tell as males and females look similar) is the only individual of his species in a group of around 20 Canada geese. He waddles around with them to find fresh grass, he swims with them in their daily pond dips and even sleeps next to them. In other words he acts just like the other flock members.

It may be that he will leave the group after winter to find a mate or he may have already found one in the flock. It seems that cross breeding between different species is very common in waterfowl: Ducks, geese and swans. Although more is known about the reproductive shenanigans of ducks, some research on geese has been showing a similar picture.

A survey in the early 2000’s in the UK found the most common goose interbreeding was between Greylag geese (i.e. Greg’s species) and Canada geese. However this is still a rare event. Like other geese and swans, greylag geese form long-term bonds with their mate and both parents help raise and protect the goslings. But how do geese of different species end up living together and breeding?

Why do geese interbreed?

One way that geese of different species pair or breed goes back to their upbringing. Birds have many different strategies when it comes to parenting. Some are attentive parents, like plovers, who pretend to be injured by hobbling around acting like an easy target to detract the attention of a predator from their vulnerable chicks. While others, like the cuckoo, will dump their eggs in another species' nest and leave the child-rearing to someone else. This egg dumping behaviour can happen even in species that usually rear their own chicks.

Greylag geese are one species that do just that. When a greylag lays an egg in another species’ clutch, let's say the Canada goose, the hatchling will imprint on the Canada goose and be raised as one of them. This may have been how Greg ended up in the flock of Canadian geese. When that gosling grows up it might find a Canada goose mate.

Maybe in a year’s time we will see little Canada-greylag goslings being attentively protected by Greg and a Canada goose. Or maybe he will remain chickless for a while. Whatever the reason for his introduction to the group, he is clearly a flock member and to them it does not matter what species name we humans have come up with to help us categorize animals.