Bird Party – What is a Flock? 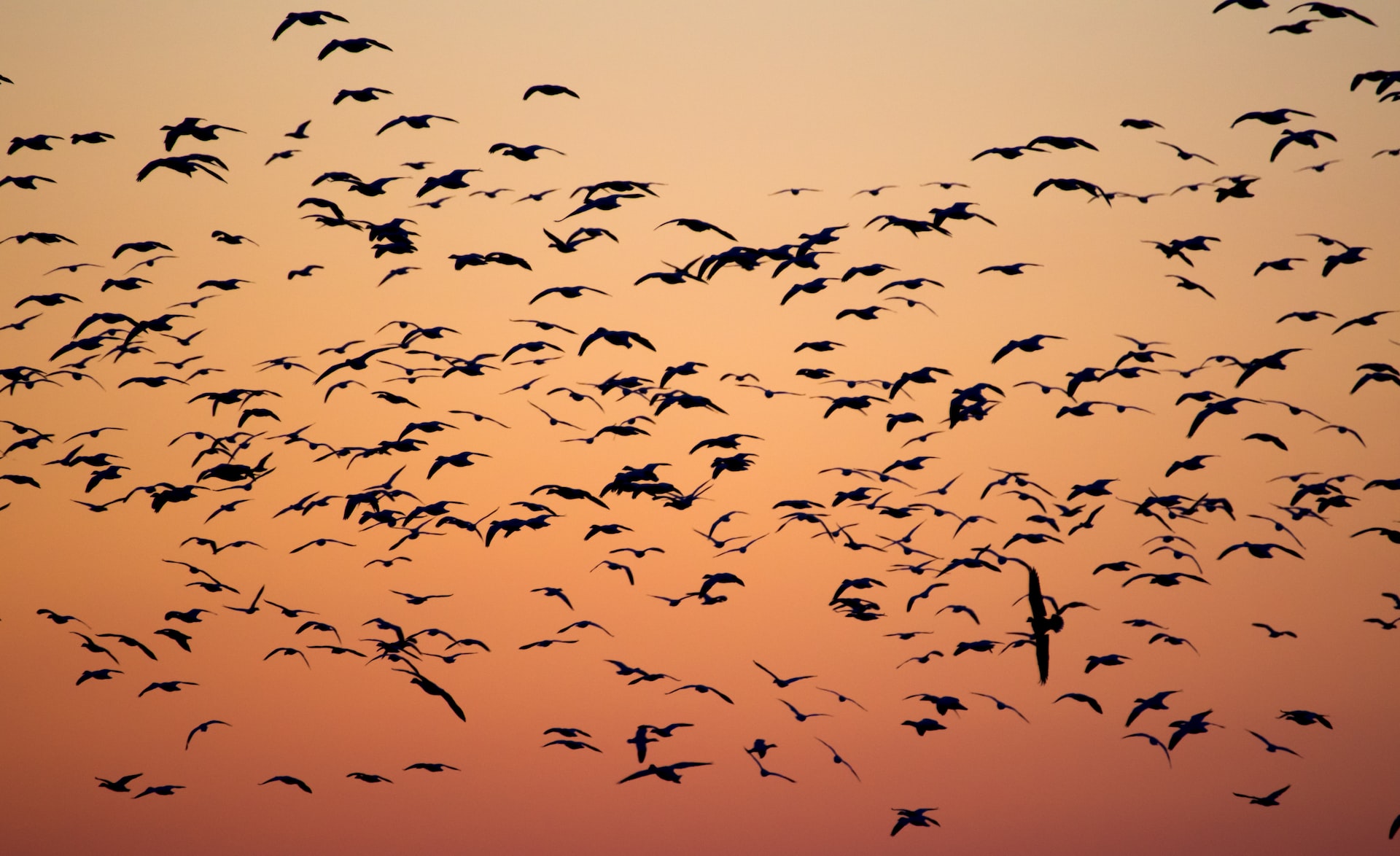 For hundreds of years, people have marvelled at the sight of a flock of birds passing overhead. Often heard before being seen, there is something about birds en masse that is captivating. But they don’t do it for us, of course, so why do they do it?

A flock is formed when more than a few birds come together in a group, and there are several different reasons for why this would happen. However, not all birds form flocks.

One of the most iconic sights of birds migrating is the V formation.

Some birds like European robins are so aggressively territorial that the very thought of another robin near them sends them into a belligerent frenzy, with tails cocked and fights that last for hours, often resulting in at least one fatality.

But the advantages to flocking behaviour means that many bird species do it, sometimes all the time, but especially during migration. One of the most iconic sights of birds migrating is the V formation of large birds like geese and cranes. It is now known that birds like these adopt these formations for efficiency.

The “leader”, usually the fittest bird in that family or species group, will be the head of the V, and the downdraft that their wings create provides uplift for the two birds behind it, positioned on either side at just the right spacing to take advantage of this turbulent air.

Likewise, the two birds behind them benefit from their wingbeats, and so on. Over time, the leader will tire, and the birds shift position, giving them a break. It is a remarkable display of working together for a common goal.

One of the main advantages of flocking behaviour is to keep a lookout for predators. You can observe this quite readily among any group of ducks at the water’s edge, where they appear to have arranged themselves in a tight circular group.

The birds on the edge will be “half-asleep”; that is, the side of their head that is inward facing will have a closed eye, and even that side of the brain will have slowed down functions. This is called unihemispheric slow-wave sleep and it enables the bird to get some rest, whilst the other half of the brain is alert and the other eye is open, on guard.

This is a remarkable example of birds employing the safety in numbers tactic, one that works very well. It may seem daft to us to put yourselves out there in the open altogether like that, but it is actually more effective at staying alive than trying to hide, alone.

As a predator, viewing a flock of flying birds from the outside becomes hard work to get a fix on any one particular bird, especially when those birds then wheel about in all directions.

One of the most famous examples of birds flocking and moving in this way is that of the European starling, whose huge flocks often number hundreds of thousands of birds.

These vast groups of birds only form near the end of the year, the reason for which still remains unclear but it is thought that as food is becoming scarce and temperatures are dropping at night, they do this to pass information about food sources as well as huddle tightly together in great roosts for warmth.

A starling flock is called a murmuration, and the simply stunning display they put on whilst coming together in these groups is on many a person’s bucket list to see. Computer mapping finally solved the mechanisms behind murmurations, calculating just how the birds manage to move almost simultaneously in all directions, without crashing into each other.

It turns out that there is a rule of seven, whereby each bird is aware of the next seven nearest to it. If any of those birds moves a millimetre to evade a predator, so does the next one in the same way, and then the next one, and so on, until the whole group has shifted entirely in what we only see as a swirling mass.

It is quite possible that some parts of the group are not even aware a predator was there in the first place.

The practice of tracking bird flocks by radar first came about as an accident.

Many flocks can be seen from space, and some can be vast: flamingos form flocks of around 30,000 to 40,000 birds every year, a sight that is so unique that it has earned itself its own collective noun of “a flamboyance of flamingos”.

Sandhill cranes are those types of birds that like to hang out in pairs or family groups much of the time, but during migration, these birds famously form large flocks between 400,000 and 600,000.

The practice of tracking bird flocks by radar first came about as an accident during World War 2, which in itself was a twist on using weather tracking systems to detect enemy planes. Some readouts were showing large masses that couldn’t possibly be aeroplanes, and someone correctly guessed it must be birds.

That discovery eventually led, after many decades of finessing software and collating data, into BirdCast, a remarkable project set up by The Cornell Lab of Ornithology. This bird migration forecast mapping tool aims to provide real-time predictions of when, where, and how far birds migrate.

While many bird species that do form flocks will do so with their own kind, there are also those birds who will fly with other species, again employing the safety in numbers method. In North America, wood warblers travel in mixed flocks more than any other family of North American birds.

Endangered species have also been seen to form mixed-species flocks, possibly indicating that they are aware of the need to boost their chances of survival.

Birds, like all animals, have many needs – finding food, finding and getting home, staying warm, and staying alive; all objectives that are made far simpler if they do it together rather than alone.