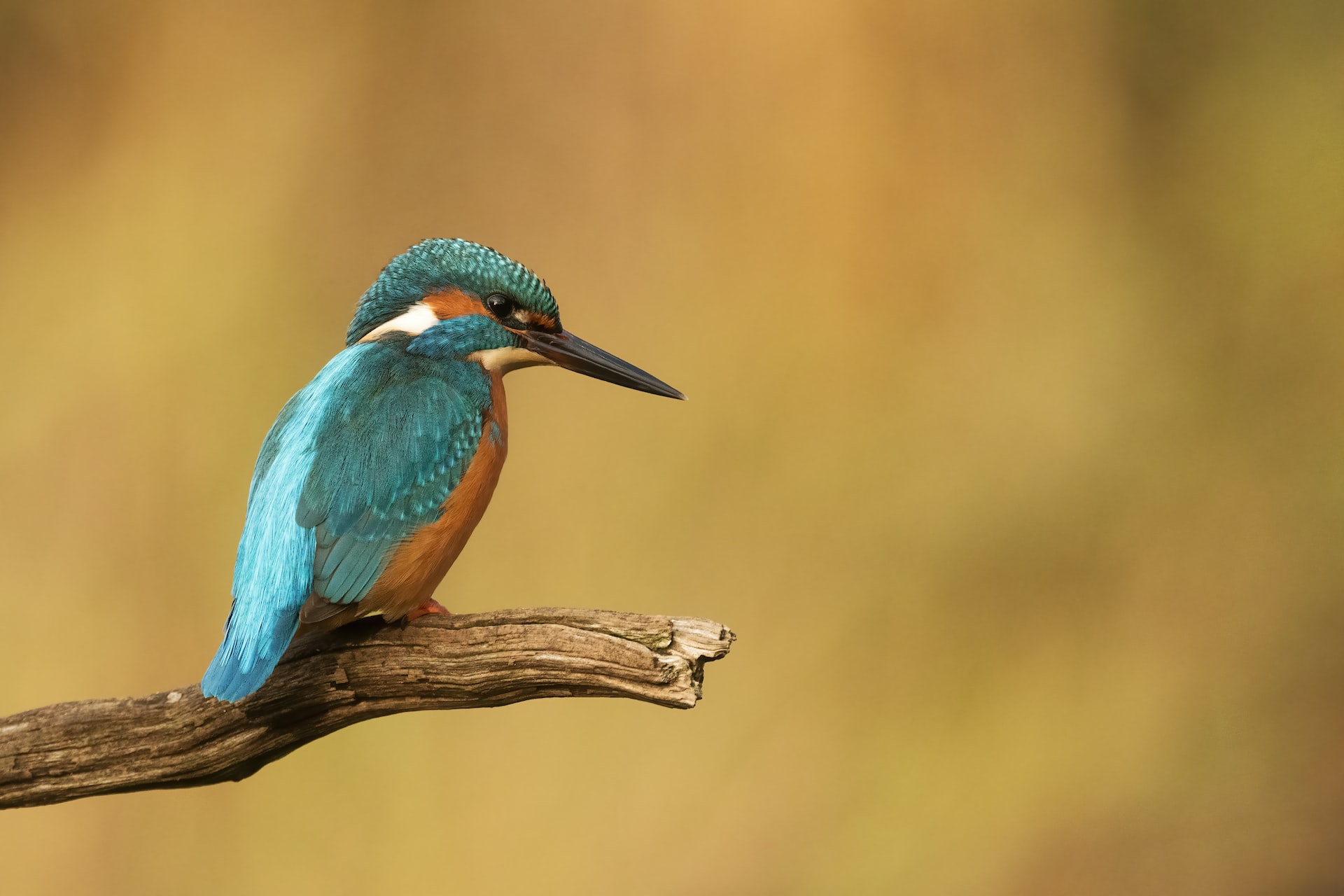 Kingfishers can be found in every part of the world except for the freezing poles and the driest deserts, and that sturdy knife-like bill is a sure-fire way of identifying any members of the Alcedinidae family you may come across. In today’s blog we take a look at some of the species you could be privileged to see, or at least catch a fleeting glimpse of as they dart on by.

Originating in the Old World around 27 million years ago, it is generally accepted that kingfishers started life in the Indomalayan region – south and southeast Asia, and the southern parts of East Asia. Whilst that’s where they hail from, their diversification appears to have taken place in the Australasian realm, as a result of repeated “invasions” across the seas, and the unique island and continental flora down south spurred a variety of adaptations, most notably seen in the kookaburras.

One of the defining characteristics of kingfishers are their dagger-like bills, but over the millennia, kookaburras have developed less pronounced bills but retained the wedge-shaped head. The most atypical bill seen on any kingfisher is that of the shovel-billed kookaburra. The clue is in the name, and these birds use this broad, heavy yet short bill to probe through the moist and leafy forest floor, seeking out its preferred diet of earthworms, snails, beetles, lizards, and insects.

The name ‘kookaburra’ is a loanword from the Wiradjuri language: guuguubarra, onomatopoeic of their call. Perhaps one of the most famous examples of this bird is the laughing kookaburra, which is also the largest kingfisher in the world, growing up to become around 47 cm tall and weighing around 500g in adulthood; its distinctively bizarre and maniacal call is also said to be the most used stock audio in the world, portraying dense Australian outback settings in movies.

Fit for a king

All kingfishers are distinctive birds, and it’s hard to mistake one for anything else: small to medium-sized, they are often brightly colored, typically sporting metallic blue or green upperparts and orange and white underparts; numerous other hues make up the rest of the plumage. Common colors aside the greens and blues are pink, magenta, azure, yellow; but even the browns, blacks and purples seem designed to catch our eye, and that’s because the very nature of their feathers plays with our perception of light, specifically blue light.

That shimmering plumage is not from iridescence that we can see in those other winged jewels, the hummingbirds, but because of something called structural coloration; the very make-up of their feathers scatters the blue light within a spectrum much more strongly than red, as in the Tyndall effect that we see in the sky, and in smoke wisping through the air from two-stroke engines.

Accompanying this array of plumage is that compact and wedge-shaped head, often crowned with a tuft or crest, and the body is stocky with short tail feathers at one end and that awesome and dangerous dagger of a bill at the other.

What’s in a name, anyway? You’d be forgiven for thinking that all kingfishers fish, but truth is, only some of them do. The kingfisher family can be divided into three subfamilies – Tree or Wood; River; and Water kingfishers. Tree kingfishers, the Halcyoninae, a name that confirms that these are the most vibrantly colored birds in the family, are the most numerous with around 70 species.

They are found throughout the Old World: Asia and Australasia, but also appear in Africa and the islands of the Pacific and Indian Oceans, inhabiting diverse ecosystems ranging from tropical rainforest to open woodlands. They primarily feed on termites and other insects, worms, and small invertebrates.

River kingfishers are also known as Pygmy kingfishers; widespread throughout Africa and east and south Asia as far as Australia, there is one species, the rather boringly named common kingfisher, that appears in Europe and northern Asia. This group includes those many kingfishers who do actually dive for fish from a perch, but one very interesting distinction to make in this group of birds is those who do prey on fish have black bills, and the ones who hunt for insects and other invertebrates have red bills.

The Water kingfishers are the smallest subfamily, comprising just six species, all found in the Americas – also known as cerylids, these birds share a common distinction that sets them apart from all the other species – they have greater abundance of blacks, whites, browns and grays in their plumage and very little color; when it does appear, it is of a more muted display rather than dazzling vibrancy.

Olive greens, tans and ochres; even the exotic-sounding Amazon kingfisher has a mostly oily green plumage and a broad chestnut band across its breast. But the sheer combination of those stark blacks and whites in a variety of arrangements that include spots, stripes, and wide contrasting bands more than make up for any perceived lack of pizzazz.

This subfamily also contains the aptly named Giant kingfisher, the largest kingfisher on the Africa, who whiles away the hours across much of the continent south of the Sahara, its large shaggy crest, black bill and fine white spots and bands on black wings and tail making it easy to identify, if the sheer size of it doesn’t.

Kingfishers tend to stick to their designated areas of existence, and most species are resident all year round. Those species that do show migratory behavior are the ones who live in the New World, like the Belted kingfisher; the only kingfisher in the majority of its range, this bird’s breeding habitat is near inland bodies of waters or coasts across most of Canada, Alaska and the United States. In winter, they migrate from the northern reaches of its range to the southern United States, Mexico, Central America, and even the West Indies.

Some species can also give us birders something to get excited about. In 2010, two Canadian birders on a trip south spotted a rare visit by an Amazon kingfisher at Zacate Creek, Laredo, TX. As soon as word got out, people from at least eight states and two Canadian provinces flocked to the popular birding site to catch a glimpse of this large heavy-set bird, noting its similarity to the green kingfisher, the smallest of the American species. Sharing much of its Central and South American range with the Amazon species, it can also be seen in southern Texas, but the main differences are the size and weight – greens are much smaller coming in at around 20 cm long, whereas the Amazon is almost 10cm taller, and weighs three to four times as much as the diminutive green.

Kingfishers are simply beautiful birds whatever their coloring, and any chance to see one should always be taken. Super-fast in flight, you may only ever get a millisecond glimpse, but your primal brain will have noted that flash and blur as something sped past. Check out your local waterways and lakes, especially any pools in deep forests, and also keep a look out for their cavity nests during breeding season, often just glimpsed in the bend of a riverbank where the water is calm and still, or in the crook of a gnarled and softly rotting tree.

Be careful, though, as these birds are exceptionally intolerant of strangers when the kids are around, and you may find that bill coming straight for your suddenly quite vulnerable head.