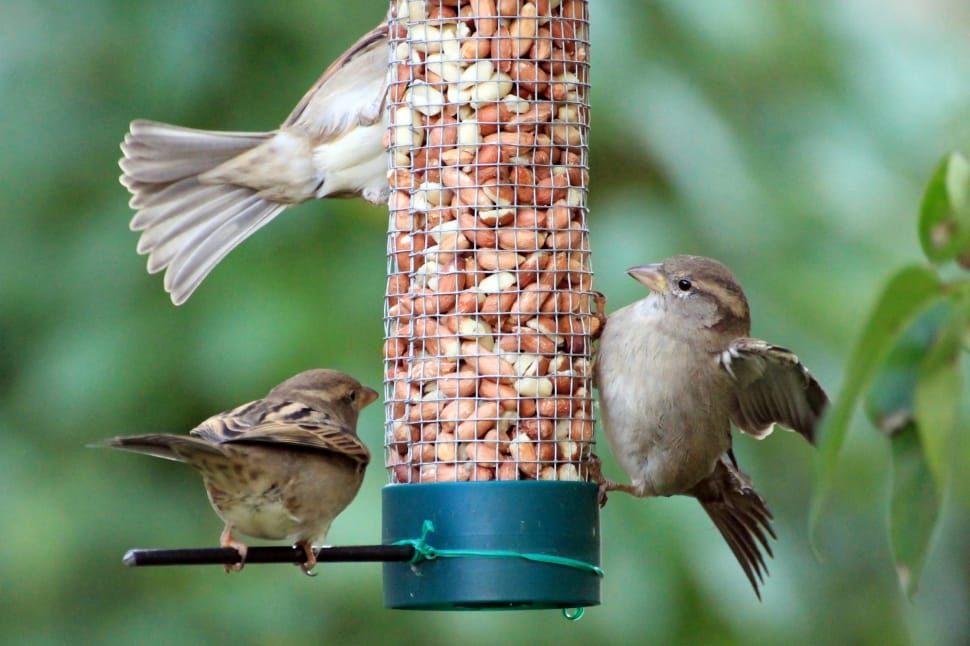 Birds have complex and urgent lives, where every second is a choice between survival and death; we like to help out by putting out bird food, especially as the weather turns cold and resources are hard to come by. But watch a feeder closely for a few minutes and you’ll soon see a pecking order played out, with some birds victorious whilst others beat a retreat. Today, we look at why there are those personalities that dominate, and those that yield.

Type the words “pecking order” into a search engine and pretty much every time, you’ll be informed that the term was first coined by a Norwegian zoologist called Thorleif Schjelderup-Ebbe in his 1921 dissertation about the dominance hierarchies he observed in chickens, with the more dominant animals of the group using their beaks as a weapon and having a go at those with a perceived lower-ranking status.

Whilst this body of work would be rightly celebrated and discussed in huge depth across all disciplines from that point on, the behavior exhibited by those chickens had already been fully documented some 24 years previously by a 14-year-old Margaret Morse Nice as she documented the interactions between the family chickens. Nice is regarded by many as the pioneer in thorough and rigorous field study in behavioral studies on birds; her work on song sparrows remains unparalleled in terms of scope, detail and data.

Both scientists concluded that there is indeed an established order among birds when presented with a common and necessary goal, in this case, getting at food. You don’t need to have chickens to see it play out, though; put a bird feeder up in your yard and you’ll witness it soon enough.

Over the years, ornithologists have amassed a huge amount of data from their own studies, and more helpfully and recently, with the unequaled assistance of citizen science in the form of bird counts. Events like the Christmas Bird Count and the UK’s RSPB Big Garden Birdwatch have accelerated the results of research data beyond words; since 2016, Project FeederWatch has also been asking participants to make notes of how the birds behave at their feeders, as well as how many turn up.

When birds visit a feeder, they are thrust into interactions that simply wouldn’t exist in the rest of their lives. This is an ideal situation to watch how they behave, and across the globe, the same scenarios are replicated. In North America, common hierarchies are now well-established, based on these vast datasets accumulated over the years. For feeder birds, the American crow is king, (raptors are discounted from these studies as theirs is not a social interaction – they are simply out to eat all other birds).

The order spans downwards from there to the least dominant of all the feathered ones, the Carolina chickadee. But whilst a brief glance at this scale may show that size is the obvious factor, there are some curveballs in there that means something else must be at play. Whilst no match for crows, blue jays appear quite high up the ranking, despite being much smaller than some birds that appear lower down on the dominance scale. ‍

Mourning doves are hefty birds, but they are less dominant than blue jays, and starlings, hairy woodpeckers, American robins and red-winged blackbirds, despite having the weight to throw around. Goldfinches are indeed feisty birds and have no problem standing firm with many species, but their size does ultimately mean they have to move off sooner or later. However, go even smaller and hummingbirds have some of the most aggressive behavior displays ever observed, and we all know they are tiny.

There will also be nuances of behavior that we simply won’t be able to see, and this will be on an individual level: this house finch simply may not be as hungry as that house finch. That northern cardinal may be recently recovering from an injury and can’t afford the energy expense to assert its place. This red-bellied woodpecker may have only just finished hammering yet another hole and is a bit tired.

There are multiple reasons why some birds will display dominance over others, but a leading factor considered by most is how sociable the birds are in their species existence. House sparrows are teeny little fellas, but they roam around in huge groups, sharing information. You will also see them bombard or avoid each other, as much as they do other larger birds.

All of this frenetic activity at the feeder may look to us like all-out chaos, but each of these birds are simply following the invisible rules of an ancient avian social order. You’ll also observe that most interactions won’t be protracted, and will end with a swift decision for one bird to move on and let the other bird in. This is simply all about conserving energy, in much the same way that mobbing behavior during breeding season, when smaller birds seem to gang up on larger raptors to protect their nests from predation.

Whilst it may appear insane to attack a hawk much bigger than you, the smaller birds use their aerial agility and speed to their advantage. The already weakening hungry predator needs food, therefore it knows it is far more cost-effective to just fly away and try again another time than use precious energy fending off silly annoying black things in its face all the time.

It is thought that this scenario exists because house finches are an invasive species, and haven’t had the advantage of millennia to establish their place in the pecking order. It is this widely accepted hierarchy among our common feeder species that saves the birds their lives in the long run – avoiding costly fights and coming back later when the other birds have had their fill increases chances of survival, plain and simple.

Bold, or a bully?

Think about how we go about our lives, particularly in school when young, when faced with people who are physically bigger than us. Depending on how you were raised, your default reaction would be to either stand your ground, give way, or push back harder. These traits are not possible to observe in birds, of course; we don’t know if mom or dad has ever given little Jimmy bird a pep talk if he’s been shoved off a branch once too often.

But studies have revealed that among the known species that do frequent feeders, the same roles play out time and again.

One human mistake we make when observing that role play, however, is to assign “bully” status to a more dominant bird. No birds or indeed any animal are inherently vicious, mean or evil. This is pure anthropomorphism on our part. An American crow didn’t wake up one day and decide that it was sick of all those little brown jobs always crowding out the feeder, and it’s going in guns blazing.

To be a bully means that you need to have perceived an individual as vulnerable, understood that vulnerability can be used against them, and then act on it in a way that is harmful to that individual.

When applied to birds, this definition affords far too many parameters – the American crow just isn’t giving a single thought to how the chickadee is feeling, whether the chickadee is suffering in any way because of the crow’s actions, or indeed if the chickadee is even “weak” – the crow is simply using its own physicality to get at what it needs, regardless of others.

It can be tempting, of course, to want to help out the little guys, and we applaud you for it, but remember that all living creatures must eat to survive, and the crow is no more at fault for being a large bird than the chickadee is for being a smaller one.

We understand that observing some birds get all the goods whilst others clearly never seem to get a look-in can be upsetting, and there are several things you can try to make it a more level playing field, such as adding barriers to your feeders that have smaller entry holes, restricting larger birds from getting in, or by using only a certain kind of food that larger species don’t like, such as safflower or thistle seed. But ultimately, it’s a good thing to try and help all birds stay alive, so if you do employ various tactics to discourage larger or more dominant birds, then consider leaving out a feeder or two just for those kinds as well, then everyone’s happy.