Back to tales
Bird conservation
,
Migration
,

The Perilous Journeys That Get Harder Every Year 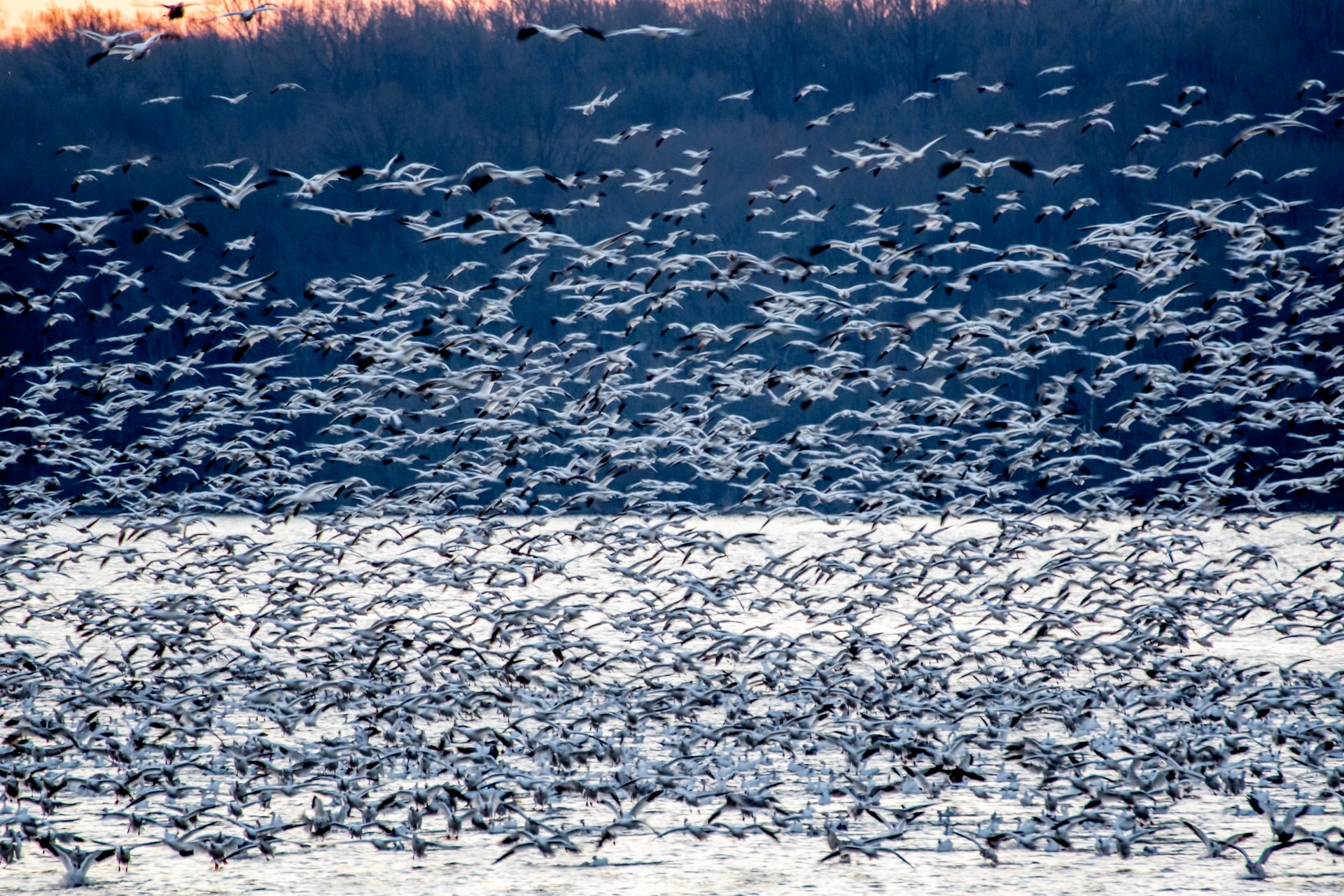 Making your way in the world today takes everything you’ve got, according to a popular US sitcom, and the birds surely know this. Surviving migration is hard enough during “normal” conditions, but birds on those journeys are now facing more and more dangers. Is there light – or better yet, no light – at the end of the tunnel?

An estimated 40% of the world’s birds migrate each year between their breeding and nonbreeding grounds, with some spanning more than twice the distance around the globe each year.

Studies carried out on the decline of global bird numbers have found that there are around 3 billion less birds in the world today than there were in the 1970s, and 80% of those gone are from migratory bird species.

It makes sense that an epic journey across thousands of miles will be subject to potential risk including exhaustion and other dangers, and during bird migration, losses will occur every year. However, it has long been accepted that those losses were all just part of the unknowable mechanisms of nature maintaining a balance in populations: weather, disease, and so on.

There are around 3 billion less birds in the world today than there were in the 1970s.

Migratory bird species have evolved to undergo this arduous challenge; this seemingly reckless lifestyle found its niche aeons ago and millions of birds across the world manage this feat every year. Their spring flights have been timed to put them in the right place when the most nutrient-worthy insects and fruits hatch and bud, and their journeys are now known to be peppered with pit-stops along the way that should provide them with what they need for the next stage.

Birds appear to know what they are doing, and yet their numbers have been declining at a faster rate than ever anticipated, and only within the past 50 years. This is thought to be because of the presence and adverse effect of one thing – us.

In 2018, The Cornell Lab of Ornithology mapped the progress of bird migrants during their bi-annual journeys and found some worrying results. Based on cloud formation data gathered over 5 years and 143 weather stations across the United States, it was observed that when birds headed to their wintering grounds, around 4 billion moved south from the northern states and Canada lower down into the U.S., whilst another 4.7 billion birds left the U.S. entirely and crossed the southern borders into the tropics.

However, when the birds returned some months later, there were notable reductions in numbers: 75% made it back from the tropics, but even fewer – 64% – came back alive from the southern states to the northern parts of the continent. In other words, birds who faced greater peril by traveling further were more likely to still be alive come the spring than those who had moved relatively less distance. This discrepancy is thought to be the result of two major issues – habitat destruction, which includes light pollution, and climate change.

The researchers found that whilst weather events certainly took their toll as was to be expected, the main factor was lack of resources, either at their final destination or sometimes more crucially at any of the stopover sites their species had been using for centuries.

All of the birds faced these issues, but those birds who flew the least were also having to contend with a myriad of additional problems in recent times: their historical winter habitat are now either fully or partly urbanised or industrialised, or stripped of the resources they rely upon to survive the winter: trees for roosting together in for warmth gone, shrubland and hedgerows for protection against predators gone, plants whose fat-and protein-rich seeds and nuts that supply the calories for energy, all gone.

Only 10% of the known stopovers fall under protected land.

Those birds who fly further away and end up in sparser populated and relatively untouched tropics have a better time of it, but still struggle. Knowing what we know now, it is only logical that any similar habitat takeover in the tropics will lead to the same decline in returning numbers.

Migration mapping over the past few decades shows that when birds do take a few days’ rest, they don’t just choose anywhere, but head to the same sites year after year. These ingrained stopovers provide researchers with all the data they need to know about what will arrive when and where.

And yet, many of those places are now no longer accessible, or are no longer the bounteous habitats they once were. In North and South America alone, only 10% of the known stopovers fall under protected land. The rest has either gone or been sold off, prepared and earmarked for agriculture or construction.

Of course, it’s not just the US. In North Africa, a process called desertification is occurring at an alarming rate. A quarter of Europe’s birds use a vast grassland region called the Sahel, which is Arabic for “shore”, that stretches 5,900 kilometres from Senegal on the Atlantic coast all the way across to Eritrea on the Red Sea coast, and is anywhere between several hundred to 1,000 kilometres wide.

This thick fertile belt lies between the treeless savannah and the southern edges of the Sahara desert. Birds stop here before they cross the desert on their way back to their breeding grounds. An alarming combination of overgrazing of this grassland for agriculture and climate change has led to drier ground and a spread of the Sahara, which has gained an extra 10% since the 1920s.

The once abundant stopover site has lost much of its usefulness preventing millions of birds from refuelling adequately, with the consequence that it’s now harder for birds to manage the flight over it, and perishing on the way. Evidence of this has been shown by the decline in swallows and martins returning to Europe.

Most migrating birds do so at night when the air is cooler, there are fewer predators, and the winds are often fairer. Clear nights used to provide fantastic views of the constellations which the birds use to navigate, but now competing light sources mean a third of us can no longer see the Milky Way from where we live.

Light pollution is a double-edged sword for migrating birds – the dazzling array of hundreds of miles of lights from the ground attracts birds toward them and at the same time dims their view of the true lights in the sky they have historically followed.

It is thought that light pollution from cities, ports and road networks attracts migrating birds to substitute stopover sites that will not provide them with what they need.

The Tribute in Light memorial to those killed on September 11th 2001 in New York is lit on the anniversary for 24hrs every year, projecting the xenon glare from 88 spotlights 6,000 metres into the sky, and can be seen from 100km away.

Unfortunately coinciding with the same time thousands of birds are trying to navigate along their flyways, not only does it interfere with the view of the stars, it also attracts other birds who would otherwise not fly anywhere near it – a radar study showed that when it wasn’t lit, there were around 500 birds within half a kilometre.

When it was turned on, 16,000 birds flocked to the beams, and would often spend upwards of an hour flying in confusion. From this result it was estimated that around 1.1 million migrating birds had been affected by the memorial over a sample seven-year period.

Detractors also blame the beams for the rise in building collisions as a result of distraction, and thousands of birds die from exhaustion: every wingbeat expends much needed energy which has been spent going in the wrong direction or in circles.

A global change in attitude towards migrant birds needs to happen.

Nowadays, volunteers monitor the numbers of birds seen to fly into the beams and they are turned off for 20 minutes when observers state there are more than 1,000 birds in the vicinity. This is just a single example of uncountable light pollution problems across the world.

When we talk of migratory birds, the word “millions” implies that there’s still plenty left, so what is there to worry about? There used to be hundreds of millions of blackpoll warblers pre 1950s but now there are tens of millions.

To talk of birds still existing in such huge numbers runs the risk of invalidating their plight in some people’s minds, but that is a dangerously dismissive angle to view the situation from; time is linear, as far as we know, and if there are less around now because of things that we have done and continue to do, then logic dictates there will be less than there are now at any other point in the future, until there are none.

The good news is that in the past decade or so, a surge in new research methods and new technologies have helped influential bodies research and understand migration, providing raw and real data to present to governments and conservation bodies.

Astounding leaps have already been made to preserve or reintroduce many breeding and wintering grounds, but now the focus must include stopover sites. There is little use in preserving the final destination if the birds can’t even make it there.

The East Asian-Australasian Flyway crosses the Yellow Sea mudflats north of Shanghai, and at one time this used to be a vital stopover point for around 50 million waterbirds eager to probe for tiny bivalves, worms and molluscs embedded in the thick and fertile mud. Viewed by many in industry as a wasteland, from the 1960s the mudflats have been filled with rocks and soil to make solid ground for ports, chemical plants and farmland, a practice rather arrogantly termed “land reclamation”.

Decades of this practice have reduced this once teeming landscape by two thirds since the 1980s, placing the 50 or so species who use it at risk from extinction, and putting it on a par with the rate of rainforest eradication. Prediction models have decreed that in just 11 years from now, 75% of the Asian-Pacific land surface will have been impacted with infrastructure development.

But, one unlikely champion taking a major step toward changing this is the Chinese government. To the shock and delight of many, in January 2018, China’s State Oceanic Administration agency announced reforms to end much of this land reclamation.

The reforms apply nationwide, but the Yellow Sea area will reap the most benefit. Any “business-oriented” land reclamation has been outlawed and local governments who previously authorised anyone who came along with enough money have now had that power removed.

In addition, 14 shorebird hotspots along the Yellow Sea and the adjacent Bohai Bay have been nominated as World Heritage sites, a designation that would provide incredible protections to the habitats that the birds rely on.

No one is entirely sure why this has happened, (likely a combination of a desire to keep widespread law-breaking by rogue authorities in check, and pressure from both domestic and international environmentalists) but many conservationists hope that others will follow suit – a global change in attitude towards migrant birds needs to happen for it all to work. Besides, there is always that human drive to be better at something first; why not environmental heroism?