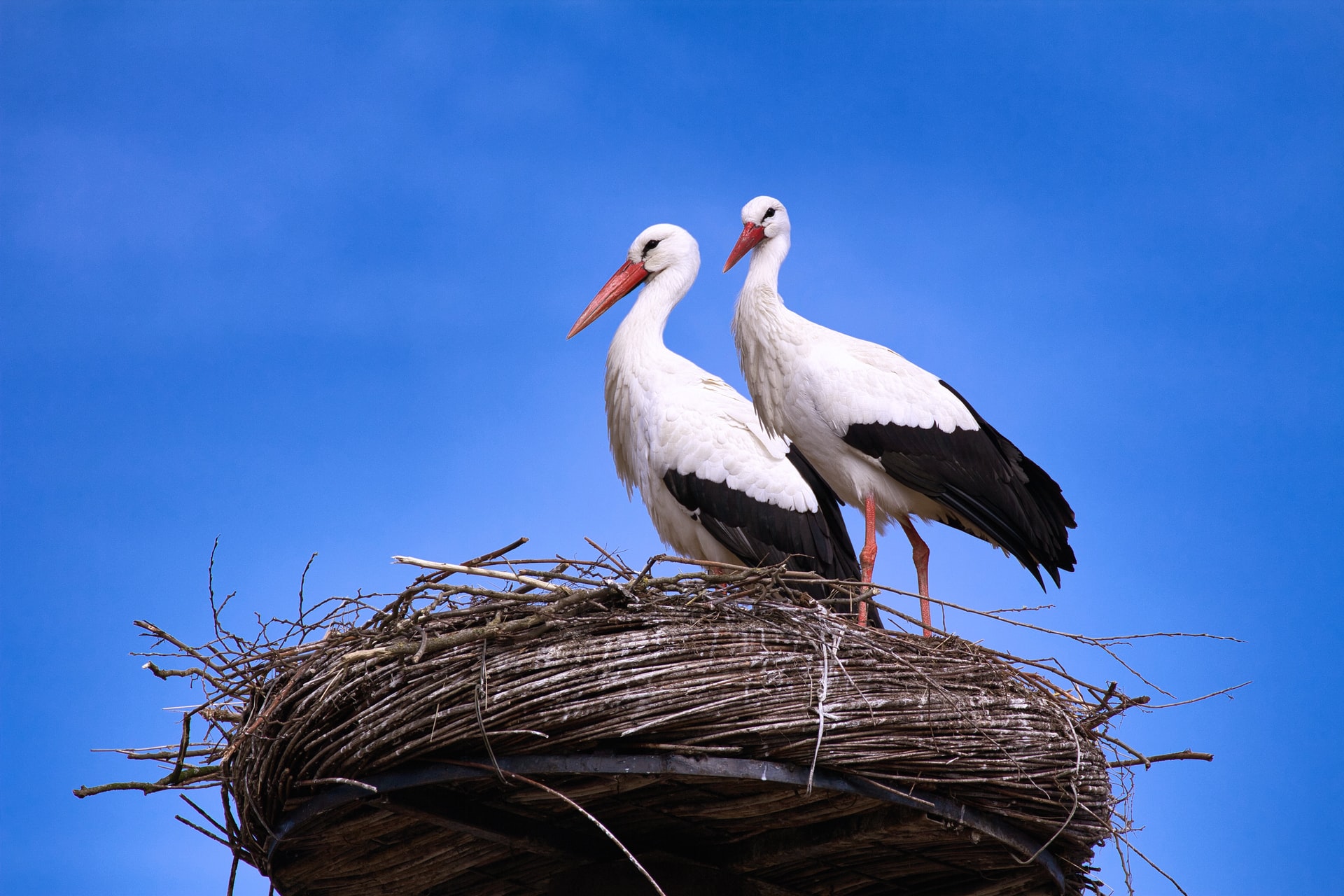 Harbingers of Spring, good luck, and a new addition to the family, storks are featured in almost every culture’s folklore as a pretty useful bird to have around. Today we look at why they are so beloved, with a dark story behind their baby-delivery enterprises thrown in for good measure.

Long legs, long necks, long bills and long lives – the stork is a unique bird that few mistake for another. Comprising 19 species, these waders can be found near rivers, lakes and other wetland areas, their long legs allowing them to slowly prowl through the shallows seeking out their diet of invertebrates, crustaceans, amphibians and reptiles, even crickets and small mammals.

They are tall, elegant birds, reaching up to 1.5m from tail-tip to bill-tip, with an average wingspan of around 1.5 to 2 meters, depending on the species (the world’s largest, the Marabou stork, has an amazing span of 2.6m).

This is why they build their nests high up off the ground, with plenty of accessible airspace. You can typically see stork nests on top of chimneys, church roofs, electricity poles, trees, and custom-built platforms made by people trying to encourage them to nest nearby.

Storks build large, strong nests of thick twigs, grass and mud. These nests must be about 1.5m across, large enough for four eggs. They also need to last for years – the energy required to build one is phenomenal, and nobody wants to be doing that every breeding season.

Storks reach sexual maturity around 5 years old, and they live much longer than other birds. In the wild, they average around 25 years of age, with some recorded as reaching their mid-thirties.

The most well-known stork is the white stork, whose striking black and white plumage and bright red legs and bill make it an easily identifiable bird as they wheel across the sky in long gliding arcs, searching for their nests, for food, and for each other.

You may have been living under a rock if you aren’t aware that storks bring babies into the world. In every card shop, the arrival of a new baby to the household is pictorially conveyed with a smiling stork flapping through sunny skies holding a loop of soft cloth in its beak, in which a gurgling happy baby is clearly enjoying its flight.

Despite the fact that no one has ever seen a stork deliver a baby, this image has persisted through the centuries; but where did it come from?

As with many things, it possibly started with the Greeks, whose tales of jealousy, unfaithfulness and revenge underpin many myths.

Once again, Hera, beleaguered wife of serial philanderer Zeus, got grumpy about him lusting after yet another beautiful mortal woman. Hera turned this poor unfortunate person, Gerena, into a stork, and ordered her to fly far away from Zeus.

Not wanting to leave her new-born baby behind to the wrath / neglect of the Gods, Gerena wrapped the infant in a blanket and took it in her beak and up into the sky.

Hans Christian Andersen also played a rather macabre part in cementing this image into public consciousness in his 1839 dark fantasy tale The Storks. In Andersen’s tale, all summer long, human boys would taunt the growing young storks in their nest, singing rude songs at them.

The stork parents would instruct the birds to ignore the silly humans and focus on getting strong for the migration, but the juveniles harbored resentment and dreamed of revenge. When they were all ready to fly to Africa, the storks wanted to get their own back, so the mother conceded there was something they could do: fly to the nearby baby pond and find some dead babies to give to the boys, making them cry.

One boy who didn’t receive a deceased sibling was Peter, the lone voice of reason who told the other boys it was wrong to be rude; he was rewarded with both a brother and a sister, and is also the reason that Danes also refer to all storks as Peter.

This rather grim tale was probably influenced by Germanic folklore, where the souls of humans waiting to be born drifted in marshes and ponds; the storks would find them as they searched for food.

‍Good babies would get to travel in baskets on the storks back into the welcoming arms of their happy mothers, and bad babies were carried squealing in their beaks and unceremoniously dropped down chimneys to the startled and now inconvenienced mothers below.

In many parts of Europe, weddings would traditionally take place on the Summer Solstice and everyone had a massive party. Certain acts of consummation would follow, and lo and behold, around 9 months later, babies arrive, which also happens to be the same time when white storks would return to Europe on their spring migration. Indeed, the return of the storks in countries like Slovenia, Hungary, Spain and Poland is a most welcome sign of Spring coming, the season we always associate with rebirth and new life.

No one quite knows the true origin, but no matter, as the explanation that storks brought the babies also doubled up as a wonderfully convenient tale to tell the little ones when they asked mom and dad where this new sister or brother came from, avoiding any uncomfortable acknowledgements about the physical acts of sex and birth.

Mankind has made a bit of a hash of learning to live alongside animals, seeing their presence as a threat.

In the past, stork nests have been customarily destroyed as they have been perceived to be damaging to our electricity networks and other infrastructure. Destruction of the wetlands that storks feed in to survive, and overuse of insecticides and intensive farming has led to a huge decline in locust and other insect populations, whose large clouds buzzing over hot lands would often serve as a welcome, energy-boosting in-flight meal as thousands of storks migrated across the world.

Recently, global numbers have become desperate; but there is some hope on the horizon. In Europe, a scheme to raise awareness about their precarious existence has taken flight.

The European Stork Villages Network encourages the building of platforms for nests, has created links and processes with energy providers on how to deal with any infrastructure issues caused by nests without destroying them, and holds classes in schools to teach the future generations about how valuable these birds are to the ecology of the planet.

In Britain, storks used to be prevalent, especially in Sussex where village names such as Storketon and Storgelond were once in the history books. White storks are now regularly seen on the floodplains of the county, and in India, Purnima Devi Barman, an ex-college teacher turned conservationist dubbed Stork Sister, is leading the way in teaching people about the greater adjutant stork, a species once in shockingly rapid decline and now on the beginnings of recovery.

More and more people are learning about the fragility of the stork’s existence, and rediscovering the beauty of this mostly silent, majestic bird that brings the sun on large beating wings.

If we wish to continue placing our trust in their midwifery skills, good-luck and good-weather-bearing presence, we need to look after them, before there are no more stork babies to taunt.