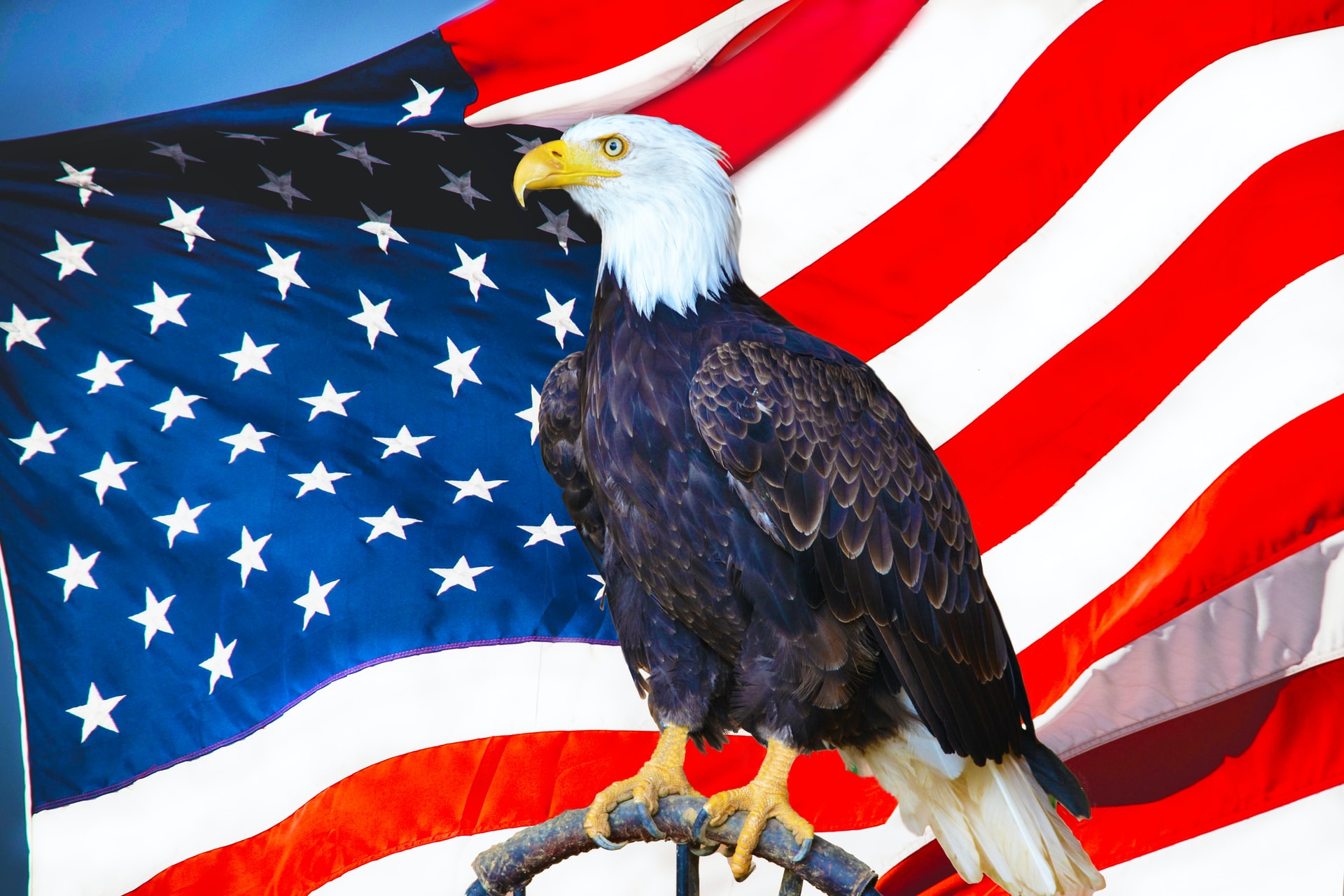 A Bald Eagle on an American flag. Courtesy of Gilles Detot, Unsplash

It cannot be denied that eagles are visually powerful birds, evoking an almost primeval sense of awe, respect, and admiration; as well as fear to be on the wrong side of it. These attributes and more made one such eagle species the perfect symbol of the New World, prominently displayed on the Great Seal of the United States of America.

Eagles have been revered by humans for their strength, predatory guile and striking beauty for as long as civilisations have existed.

Zeus had a giant golden eagle as a companion to convey his messages among the Greek Gods and mortals; the Roman god of the sky and thunder, Jupiter, is represented by an eagle, symbolic of power, strength and authority, adorning the Roman Army’s standards, shields, and flags; historical leaders such as Napoleon owned eagles, perhaps to emulate the gods before them in the hope of becoming one themselves; eagles are found on flags all over the world; a more darker yet noteworthy example being the Reichsadler, the heraldic eagle used in the German coat of arms and then appropriated to sit astride a Nazi swastika.

Given the prevalence of eagles in the mighty imagery of empires, governments and armies throughout the ages, it is not such a great leap of the imagination that when trying to decide on a symbol for America, an eagle had to take center stage. We all now know that the only eagle endemic to America, the bald eagle, finally won through: but it wasn’t easy.

On the 4th July 1776, the day that independence was declared from Great Britain, a committee consisting of Benjamin Franklin, Thomas Jefferson, and John Adams was formed, tasked with designing a new national emblem, called the Great Seal.

Alas, they failed to agree on a design, as did two other subsequent committees, and in 1782 the work of all three was handed to Charles Thomson, then secretary for Congress. Cherry-picking parts from all three attempts, Thomson discarded other suggestions such as a chicken, a crow and a hummingbird, and concurred an eagle had to be the primary bird, reminding all of how the Founding Fathers wished to emulate the unique style of government the Roman Republic created.

He presented his thoughts to the principal designer of the Seal, William Barton. Overriding Barton’s suggestion of a white eagle as being too small, Thomson ruled that the bald eagle should stand, casting aside the rumored misgivings of Benjamin Franklin that the turkey was far more emblematic of the country’s virtuosity than this sea-eagle with “bad moral character”.

On the 20th June, 1787, the bald eagle was finally officially adopted as the symbol of the United States, depicted on the Great Seal with outspread wings, holding an olive branch in one talon and arrows in the other, the eternal dichotomy of peace and war reprinted on passports, currency and official document letterheads across the country.

Contrary to its name, the bald eagle is not: instead, it sports a dazzling head of pure white feathers, leading most historians to theorize that the name comes from a shortening of piebald, meaning black and white, the black perhaps referring to the deep dark brown overall body plumage of this magnificent bird.

Another theory is that the name is simply a misspelling of the word bold, referring to the fierce power and proud independence the bird stands for.

Bald eagles are the largest raptor in the United States, and an impressive hunter; and it is this hunting brilliance that perhaps contributed to the most startling and saddening thing of all: that the love for the symbol chosen for the Land of the Free and the way the actual bird itself was treated was worlds apart, for far too many years.

The plight of the Eagle

The Native Americans lived in harmony with the species, believing them to be closer to God than humans. Little is known about their population sizes before the arrival of the European settlers, but by the late 1800s with the bird firmly imprinted into the nation’s psyche as the most resplendent bird of all, the bald eagle was recorded as in excess of 100,000 nesting birds.

But this figure soon plummeted, with hunting, persecution and habitat destruction leading the way to its spectacular downfall.

The bald eagles’ evolutionary success lay in its opportunism: its ability to steal prey supplementing its diet with hard-won prizes from ospreys and other predators. Bald eagles are also scavengers, feeding on roadkill; on lakes and rivers, you can see them trailing behind the rotor blades of boats, consuming the unfortunate bisected fish in the wake.

They will repeatedly violently harass other animals forcing them to give up on their dinner, then feast on their leftovers. This nature, that perhaps Ben Franklin had tried to warn others of, manifested itself in the minds of America's populated vast agricultural belts as equating to being lazy, immoral, dirty, and cowardly.

The clashing image between an ethereal symbol of pride with a real-life pest who lived its life devoid of “honor” mutated the people’s expectation to revere it, replacing it with a justification to balance the books; claiming that the hard workers were at risk of losing their right to eat from the land undisturbed, the eagles were persecuted in their thousands.

Bald eagles’ mate for life, use the same nest sites and usually have only two chicks per brood. This predictability and small clutch size made them especially vulnerable. Alongside the wilful destruction of nests, birds were shot or poisoned and their talons and bills sold as trophies.

In Alaska, fishermen believed the birds would eat all their stock; other animals shot with lead bullets would go on to poison the birds as they fed on abandoned carcasses; wetlands were drained and forests cut down for farmland; so much now for America’s national bird.

Indeed, the so-called Grandfather of US Ornithologists himself, John Audubon, loathed the bald eagle, and would remark that it had “an awful scream” (this is in fact true, although not necessarily justification for murdering them; but the call of the bald eagle that we may recognise from countless movies is in fact the call of the red-tailed hawk, deemed to be far more suitable to a bird of such stature). Once dubbed the “premier avian slaughterer of his time” by writer Joy Williams, Audubon was known to gleefully shoot mother bald eagles protecting their eggs, and torturing their mates when they returned to the ruined nests.

His legacy does seem a peculiar fit for one of the world’s leading conservation organizations, but thankfully, people change; or perhaps more accurately, other people make changes.

By the 1930s, the wider public had heard of the mass decline, many of whom were also being made aware of global persecution of many species via pioneers of conservation such as the US’s Harriet Lawrence Hemenway and Minna Hall, and the UK’s RSPB founders Emily Williamson, Etta Lemon and Eliza Philips.

‍The public demand to do something to save the national symbol, equating its demise to burning the US flag, meant that reason thankfully won out. In 1940, the Bald Eagle Act was passed, making it illegal to kill, possess or sell the birds.

However, a devastating blip arose in the 1960s in the form of the pesticide DDT, widely blamed for egg shell thinning and broods failing; other human interventions such as power line electrocutions, road collisions and factory pollutants discharged into rivers all piled on the pressure; in less than 70 years, there were fewer than 400 breeding pairs left. In 1978, the bald eagle was officially listed as an endangered species.

However, concerted efforts had already begun to make some headway: DDT was banned in 1968, and as it eventually left the ecosystems, combined with vastly increased awareness of the eagle’s plight, in the 1980s, numbers slowly started to rise again. In 1995, the bird was downgraded from endangered to threatened, and in 2007, removed from the list altogether. There are now almost 317,000 breeding pairs in the wild in the United States.

To celebrate the restoration of the species, on the 20th June 2019 at the 116th Congress, exactly 237 years after the Founding Fathers passed the proposal to declare the bald eagle as the symbol for freedom, democracy, courage, justice and excellence, a resolution declaring that every other 20ne thereafter as American Eagle Day was passed.

The dedicated efforts and vigilance of the authorities and conservationists alike are now rightly claiming their place in the history books, following on from the paragraphs of woeful death and destruction of the past.

Each American Eagle Day is an opportunity to learn about that past, but to then apply the lessons learned, and to look upon the bird that inhabits the Great Seal once again with affection, respect, and a promise to pledge allegiance to the species for evermore.