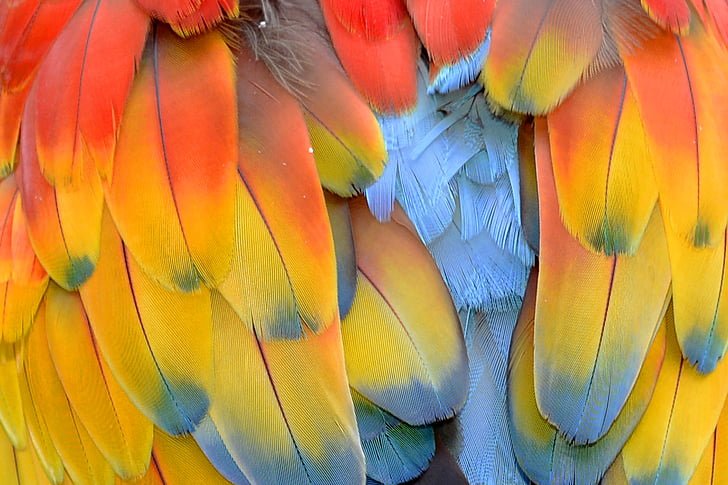 Plumage is more than just feathers. It’s a great way for us to identify different species, but what is its primary function for birds? Also, why do some birds change their entire colouring at different times of the year? Let’s find out…

The feathers on a bird’s body provide a number of basic functions such as the obvious one of providing the method offlight.

They also provide insulation to keep them warm in winter, serve as protection around vulnerable areas, and they streamline the otherwise lumpy body, softening their contours for efficient flight.

The word plumage refers to the colouring and patterning of these feathers. Depending on the species, plumage provides excellent camouflage, or a stunning range of colours, usually to attract a mate.

Plumage colour originates from two different types of pigments in the bird’s bloodstream which are then deposited in the feather follicles.

Melanin provides the duller shades such as browns, greys, blacks and some oranges, and the vibrant many-hued colouring is brought about by the presence of carotenoids.

Some colours such as vibrant blues and purples are known as structural colours (rather than pigmented colours) as they are actually feathers peppered withair bubbles, refracting light.

Birds don’t make carotenoids in their bodies naturally, so it is brought into the feather structure by the food they eat – they literally have to eat the colours to wear them.

Flamingoes extract pink pigments from the crustaceans they filter out of the water, and the blue tit gets that fantastic yellow chest from the caterpillars it eats – the yellower the chest, the more successful it is at finding yummy caterpillars, the higher it’s going to score on the mating scale.

Plumage colour originates from two different types of pigments in the bird’s bloodstream.

From fluff to flight

From the moment it is conceived, the new tiny bird is producing feathers from the protein keratin, along with all other cell development. In the egg, these miniscule beginnings develop further into natal plumage, or down, that soft all-encompassing layer that will help the chick stay warm once it has been rudely forced to join the outside world.

These beginner feathers are usually plain and are only acting as insulation and some camouflage at this point. Then, other types will begin to sprout from the follicles, hardening and gaining use and structure as they grow.

After a few weeks they will gradually cover all of the bird including the head.

Plumage patterns are the result of adaptations to the habitats and behaviour.

In the following months, summer and even autumn for later broods, these larger feathers develop into juvenile plumage, showing some colours and markings more similar to the adult birds, but they will still be somewhat plain and mottled. In species which are dimorphic, that is, exhibit a very noticeable difference between males and females, juveniles will resemble the adult female more.

Adult plumage is the final cycle, usually complete after one full year of growth, where the species’ identifying colours are fully pronounced, the ones most often shown in field guides.

When researching a guide, try to find one that shows you the differences in juveniles and females or winter and summer males. Also be aware some birds take 2 or 3 years to mature, like raptors or gulls, so these will have what is known as subadult plumage in their adolescence. Again, this will be less distinct but in each successive year will be more recognisable as adult plumage.

The variation across the 10,000 or so species of birds is staggering, and not only is there such diversity across species, some birds change their colours depending on the season, either displaying breeding or non-breeding plumage.

There are also species who will exhibit this breeding plumage all through late spring and into summer, whereas others will only display for a few weeks. But at all other times of the year these adults will display what is known as basic, non-breeding, or winter plumage.

This is generally more camouflaged and exhibits less colouring. Again, in dimorphic species, males will look very much like the females.

Check the articles about red, blue and green plumage colours.

Breeding season is the best time to learn the differences in the adults of one species. This is when the plumage is the most striking in males, with bold and sometimes contrasting colours, and even some females get to strut a new set of clothes.

As well as colour changes, some males also display additional feathers to appear more impressive during courtship, like streamers astail feathers, or long plumes from their heads as with herons and egrets.

Variations on a theme

You may one day be surprised to see a blackbird with one white wing, or a long-tailed tit with a pale head. There are several differences in feather and plumage development that can be seen in a few of each species, and that will be down to mutations affecting the amount of pigment available,

This is due to a complete lack of any pigmentation.

Do you see what I see?

Of course, geographyandclimate have great influences on the appearance of all living beings, and as usual, it will depend on whereabouts in the world you live as to what sort of colours on birds you will see.

‍Bold or subdued, plumage patterns are the result of adaptations to the habitats and behaviour.

The specific “layout” of a bird’s plumage is also influenced by its surroundings: birds who have an “interrupted” ormottled appearance tend to be those who inhabit mostly stationary environments, like stubbled farmland, shingle beaches, or shrub covered forest floors, and those with repeated bars and stripes dominating will be more associated with motion, such as woodpeckers and jays flying high up among branches.

‍Birds with mottled and barred plumage will usually be the type who fly up high but also stay still for long periods of time, like owls, thrushes, and hawks.

At one point in the past, females exhibited the same colours as males.

Much debate has gone on into whether birds are self-aware of their plumage, of course this can never be fully answered unless we develop some kind of Doctor Dolittle machine, but it’s probably safe to suggest that some birds do understand the visual arrangement of their environments with respect to their appearance.

Beauty in the eye of the beholder

On a final note, we must bear in mind that we are viewing bird colours on our own spectrum.

‍Whilst it is true these days that females appear duller and less striking than their male counterparts, there is emerging evidence to suggest at one point in the past, females exhibited the same colours as males, and evolution has granted them the ability to blend in, thus making it harder for them to be preyed upon.

A DNA study was performed on New World blackbirds, where some females are dull compared to their male counterparts, but some are just as brightly coloured as the males.

The genetic material of both was sequenced and it eventually transpired that the duller females have taken more evolutionary steps than the other females and males in progressing towards this apparent dullness.

The matingritual has long been thought to rely entirely on how colourful and how much of a vocal and physical show-off a male can be, but there appears to be equally as much benefit on finding the “dullest” looking female.

There are credible theories that suggest that both sexes of all birds once exhibited the same colours, but over time females have evolved to be morevaluable by being lessconspicuous, given that they will often be the ones near or on the nest, protecting the family line.

Throw into the mix that humans see colour far differently to birds, that there are almost certainly variations in a female’s plumage that we cannot see, it is quite possible that the drab and dreary female sparrow we see on our feeder is actually the hottest chick in town.