Do Wind Farms Have to be Bad for Birds? 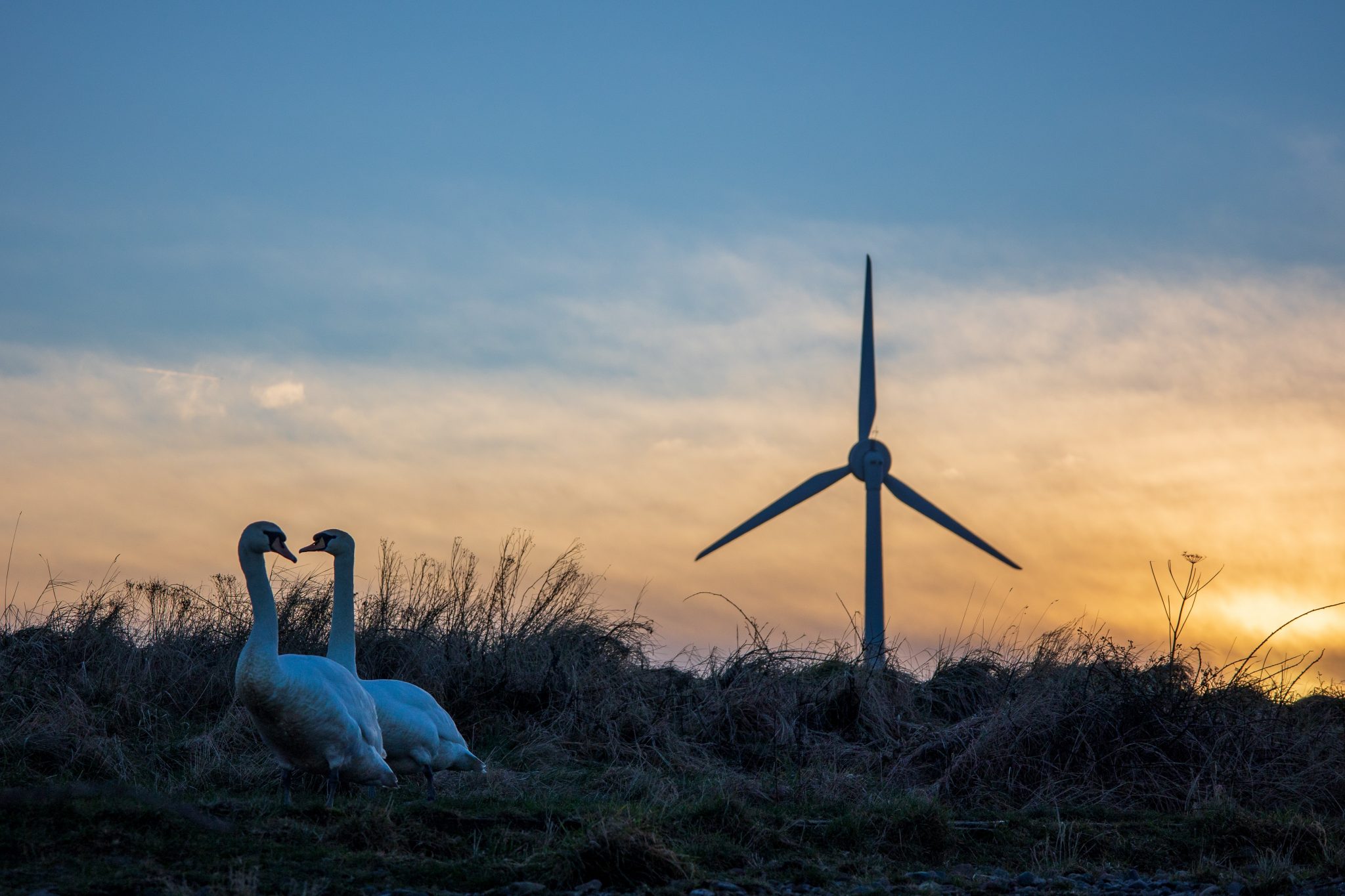 The push for green energy in today’s world increases as we become more aware of the limitations and devastation of relying on fossil fuels. Wind power is undoubtedly “clean”, but there are concerns it impacts on bird and bat life, so is this a good solution?

When proposals for meeting the world’s vast fuel needs in the form of wind energy came along, many breathed a sigh of relief. Toward the end of the 1960s, US oil production was unable to keep up with demand and what followed was a political and domestic crisis that affected millions for many years.

Embargoes imposed by Middle East entities led to the 1973 oil crisis, which was followed shortly after in 1979 with a “second oil shock”. Research into wind energy had already been rumbling away in the background for decades but a need for an alternative energy source was now at the forefront of political investment, more as a way to resolve reliance on “foreign oil”, rather than to save the planet.

But in spite of how we got there, the world’s first commercially viable wind farm was erected on the shoulder of Crotched Mountain in New Hampshire, USA, in 1980. Two years later, Europe entered the fray with the opening of another on the Greek island of Kythnos; Australia followed in 1987, and then the UK in 1991. The surge in wind energy production was exponential, and soon most nations of the world boasted gleaming towers of blades, spanning the horizon like futuristic invaders from a John Christopher novel.

Try and catch the wind

Using wind to generate power has been intertwined in human advancement going back thousands of years with the first sailboat, then the first water pump, the first grain mill.

The first electricity-generating wind turbine was invented by Charles F. Brush, a Cleveland, Ohio resident, in 1888. By the mid-1980s USA produced half of the world’s wind power using 15,000 turbines along the west coast, and by 2000 Europe was the world leader in wind energy manufacturing. Irreversible consequences of climate change are quite possibly the world’s most imminent threat; wind energy helps reduce carbon emissions and is a critical part of the solution to our predicament.

This green energy can be deadly to wildlife.

But with the honey in the mouth comes the sting in the tail: this green energy can be deadly to wildlife and can disrupt habitats. Airborne animals like bats and birds have been killed in collisions with the turbine blades, and vital ecosystems have been eradicated during construction of the spinning giants, which then brings about loss of nesting sites, food resources, displacement of species and increasing pressure on territory in ever smaller parts of the world.

Wind farm companies in the past were keen to point out that Birdlife, WWF, Greenpeace, Friends of the Earth, the RSPB and so on all support wind energy in terms of a solution to climate change, which is true, an answer to climate change must be found, but that does not mean that they agree with all the issues they bring with them.

‍Birds play an irreplaceable role in the ongoing health of the planet, and any devastation to their numbers should not be an acceptable side effect. Whilst there is not yet any evidence of an irreversible effect on bird populations, enough is known already that a solution needs to be found.

In the US, a target of 20% of the nation’s total energy has been set for 2030; a meta-study by the Fish and Wildlife Service using the most comprehensive and unbiased information available in 2015 found that between 140,000 and 500,000 birds are killed each year, being especially vulnerable during the migration seasons.

If we were to use the same wind farm style as in the beginning, this mortality rate has been projected to increase in line with the 2030 target to around 1.4million birds. But it doesn’t have to be that way.

Collisions with turbines can be reduced by adding deterrents to make the blades more noticeable; one solution includes illuminating turbines with ultraviolet light, which birds can see, or painting wind turbines purple to improve visibility.

One of the more promising technologies being used is a tool called IdentiFlight, a robot that can recognise incoming birds up to a kilometre away with high accuracy, which then alerts operators to their eventual arrival and the turbines can be shut down temporarily.

‍Likewise, data gathered for decades by the world’s ornithologists provide known migration routes and high-density times of year, and the blades can be paused until the birds have passed by. Radar and GPS trackers used by many conservation groups can provide all of this information in situ, negating any financial outlay for the wind farm companies themselves.

Another field of research is the shape of the turbine blade itself. The design of the “traditional” wind turbine is such that the horizontal blades are long and such a shape to produce lift, generating their own wind, so that the energy is not solely reliant on the presence of wind all the time; the larger the blade, the greater the energy production.Helical and vertical blade designs have been bandied about for a number of years, but no-one has yet managed to match the efficiency of the horizontal blade.

In terms of wildlife impact, there is still debate in the design world whether the benefits claimed hold up to scrutiny, with some detractors saying there is no scientific evidence that they are any safer for birds or bats; but that doesn’t mean there won’t ever be any.

One advantage a vertical turbine has over horizontal, however, is that the gearbox and motor functions can be sited at ground / sea level, removing the need for specialist high-reaching equipment like cranes, so this in itself already reduces the impact on the environment.

Similarly, vertical turbines can be anchored into the ground using “screw piles”, which can also be fully recycled, rather than vast amounts of concrete transported by road or ship, bringing its own carbon footprint. Hopefully, improvements in blade design to match the output of horizontal blades will not be too long coming.

Properly sited wind power, combined with well-designed structures, is the crux of the matter: wind farms are often constructed in vast open spaces, usually rural areas, as of course the need for unimpeded wind is utmost. The blade’s reach through the atmosphere logically dictates that they occupy the same air space as many birds, and birds will be using the same winds.

When soaring, birds are unable to manoeuvre well at short notice, and the blade’s rotation area is quite large. On the ground, the rural sites are almost always a haven for wildlife, so finding the right place for turbines is vital.

The location of a wind farm is not only an issue in terms of initial build, the needs for maintenance need to be considered, so the surrounding network of supply roads and large vehicle access has to be included; this also has an extended impact on the environment. However, hundreds of applications for wind farms are submitted every year and many are signed off because location and design have been determined to have little to no impact on bird populations.

An increase in the popularity of offshore wind farms may well be the way forward; but efforts not to disturb that natural habitat are also important, and whilst risks can be reduced on an individual site level, there are legitimate concerns that a cumulative effect, even of reduced risk, is “an ill wind that blows no good”.

But there could be salvation at hand: floating offshore farms offer a viable alternative to bottom-fixed technology, reducing some environmental risks, but this area will need more support, research and finances to realise its potential. In 2017 the world’s first floating wind farm was installed off Peterhead, Scotland, and a number of floating wind projects are progressing elsewhere across the world.

The power of all

All forms of energy have an impact on birds; there is no quick fix. Whilst wind energy will help birds along with everyone else on a global scale, the fact that wind farm facilities can endanger birds needs to be addressed.

But one of many things that wind farms have in their favour is their temporary nature - if a better, cleaner and less disruptive technology comes along, then they can just come down again. Fossil fuels will run out, so even if people are against green energy in terms of the effect on wildlife, it must be conceded that we’re going to need to use it one day, and properly sited farms do not have this effect.

Politicians, energy companies and conservation organisations need to continue to work together with the support of us, the public, to solve this conundrum. The issues are linked, but so are the answers.