Why Are Vultures Valuable 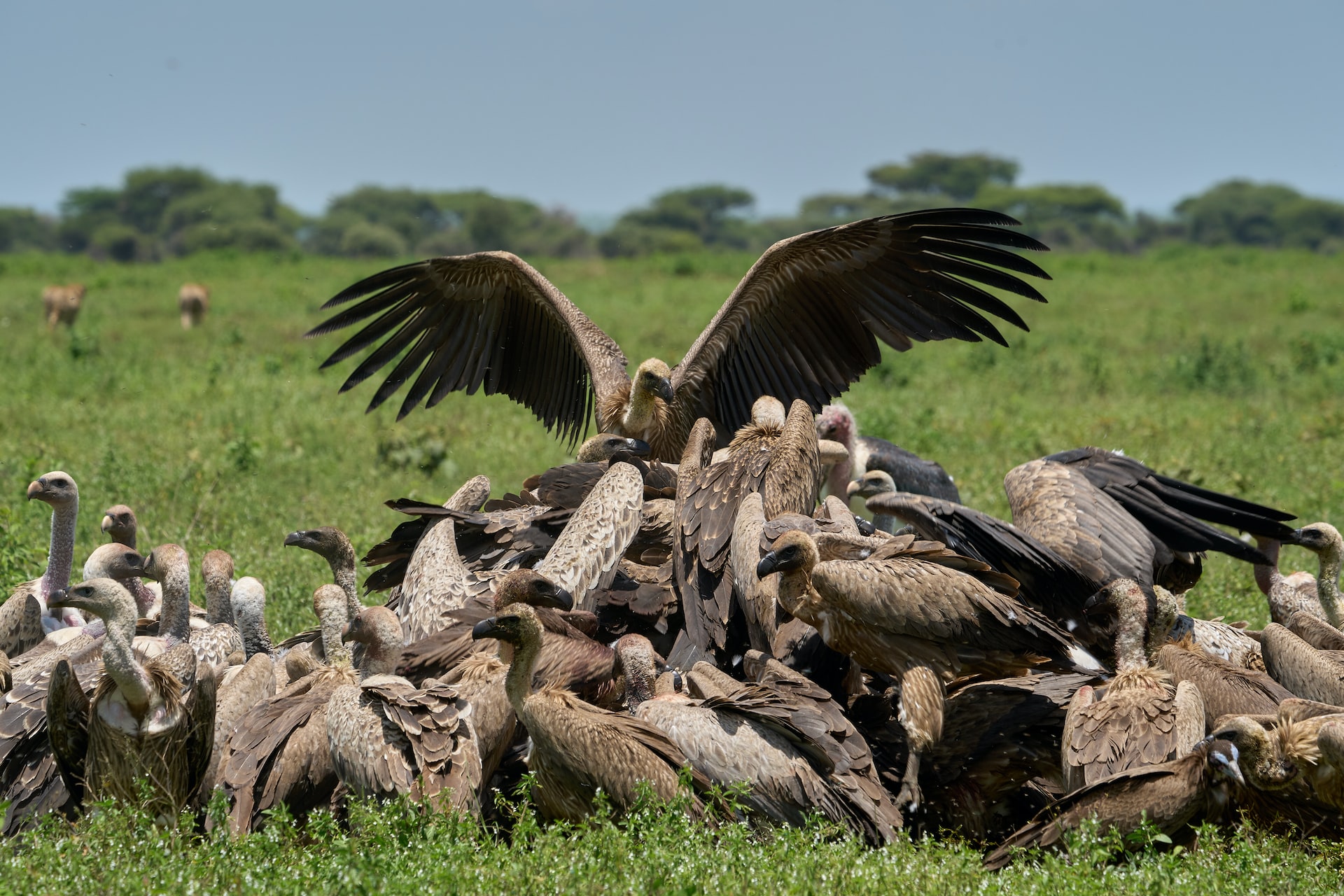 The name comes from the Old French to tear or pluck, they can’t sing, and not many people would rate them highly in a beauty contest, but the vultures of the world are some of the most important birds going; and if they do actually go, so could we.

Grainy western movies full of big skies and vast desert landscapes always, and I mean always had one consistent character. Our hero is slumped in the sand cradling his bloodied leg, his voice almost gone and lips cracking, a dusty and empty water canteen hanging limply from his hand.

The camera pans out and we see he is all alone, for miles. Then – khrraaeee! Khraaeee! Turning his squinting eyes to the blinding rays above, he sees slowly wheeling silhouettes follow the blood-curdling cries on their downward spiral through the air. The shadow of a large bird passes over his sunburnt face. He is surely a goner.

The death knell to many a chap-clad chap, the image of the circling vulture coming to feast on a still-breathing but defenceless victim has been embedded in much of the cinema-going world’s psyche since the late 1930s when John Ford’s Stagecoach hit the silver screen, propelling Marion Morrison into the celebrity stratosphere as the more “manly” sounding John Wayne.

The word vulture also means a person who will rapidly descend hungrily on a situation, usually from the point of view of benefiting from another’s misfortune. They are much maligned birds.

Bring out your dead

In an older post, we talked about how vital birds are to the world’s ecosystems and how the removal of just one species could spell an irreversible catastrophe elsewhere, be it commodities, medicines, or our own mental health.

A group of species mentioned in that post also suffers from the purely-by-chance misfortune of being one of the world’s most unattractive birds who takes part in one of the world’s most unattractive processes. Humans are a delicate species sometimes, and most of us find the idea of dining on rotting flesh disgusting, because of course it is – for an organism that is not meant to.

Our revulsion will be associated partly with the knowledge of our inability to digest this “food”, but mostly psychologically, based on our mortal fear of disease, and our somewhat denial-based concept of the attendant horror of death.

There are 22 species of vulture in both the New and Old World. Alike in appearance, they are a classic example of something called convergent evolution: animals who occupy a similar habitat evolve into similar-looking creatures; you could be fooled into thinking that means they are everywhere and in plentiful numbers. Alas, this couldn’t be further from the truth.

Vultures are perfectly harmless creatures who would only come for you if you were already dead. They feed on dead animals, or carrion as it is known, and this “ecosystem service” rids vast areas of carcasses that would otherwise rot and decay right where they died.

Aside from destroying the scenery and producing foul smells they would also leach dangerous substances into the earth and inevitably the water supply. It’s a sad fact of life that not many things die of old age: these carcasses will often have fallen victim to situations like attack from other predators, vehicle collisions or human hunting, or more commonly, disease.

Vultures’ enhanced sense of smell and keen eyesight can spot a newly felled animal within a few hours of its demise. There are many animals in the world who also take advantage of free food like this – coyotes, rats, feral dogs and the like.

Vultures are perfectly harmless creatures who would only come for you if you were already dead.

These are referred to as facultative scavengers: their scavenging only takes up a part of their diet. Because of this, their digestive systems are less capable of dealing with bacteria and other pathogens, and they actually end up becoming carriers of disease.

Vultures are obligate scavengers, i.e., their primary dietary needs are met through eating dead animals. They are exceptionally efficient birds and can strip a large carcass in minutes, but what happens next is the most important thing about them which literally saves millions of our lives every year.

Many carcasses come about as a result of disease tearing through often too large and badly cared-for livestock populations; anthrax, tuberculosis, and cholera are just a few of the diseases fatal to humans that cause these livestock deaths, but thousands of years of adapting to this diet has led to a vulture’s digestive system becoming highly acidic.

When a vulture eats flesh infected with these diseases, they do not suffer, and in fact, they kill the disease. When the microbes hit that acidic stomach, they are neutralised and are forever no more. Adding to this extermination, vultures tend to defecate where they eat, which contrary to one of humankind’s most popular sayings, is actually a greater benefit to us than we before realised.

Having consumed the flesh of livestock given this drug, vultures died within days.

A vulture’s faecal matter naturally contains these highly acidic digestive juices. At a feeding site, vultures frequently release this waste slurry onto their legs and therefore onto the ground. The expulsion of this faintly sizzling material does a few things – it sterilizes the vulture’s legs, and can also help in evaporative cooling during hot days, but it also cleanses the ground they are standing on, halting the spread of any disease-causing bacteria still present at the site.

Alarmingly, vulture populations have been subject to their own widespread demise via the good old hand of Man. The veterinary drug diclofenac was given en masse in the 1990s to millions of cattle in Asia to treat various ailments such as inflammation at wound sites, fevers and so on.

It took about ten years for desperately worried and confused researchers to find out why so many vultures were dying. There are nine species in India, all now classed as critically endangered or near extinction. Some species suffered 95% losses: in the 1980s there were 80 million white-rumped vultures, but today there are less than ten thousand.

Having consumed the flesh of livestock given this drug, vultures died within days of kidney failure. Other vultures would then eat their carcasses, and on the wheel of death turned.

Thankfully once the connection had been made, the drug was banned, although some farmers still use it illegally, but perhaps more worrying is that it has recently been granted approval in some European countries, as advocates of the drug claim that disposal of their livestock is carried out “differently” than in the East. Sadly, cases of poisoned vultures have now begun to emerge there as well.

Somewhat distressingly, the answer to this in some parts of the world has been to lay out poison for the dogs. These dead dogs were then left on the street and attracted – you guessed it – vultures: and now those endangered vultures are dead too.

The vulture may well have been the symbol for many a generation of Western movie lovers as the Time’s-Up bird, but the truth is, vultures make our world a much cleaner place. Their diet is not our cup of tea, but without them, the planet would soon be consumed by microscopic disease we could be powerless to stop. Sound familiar?