Pigeons of the Floating City 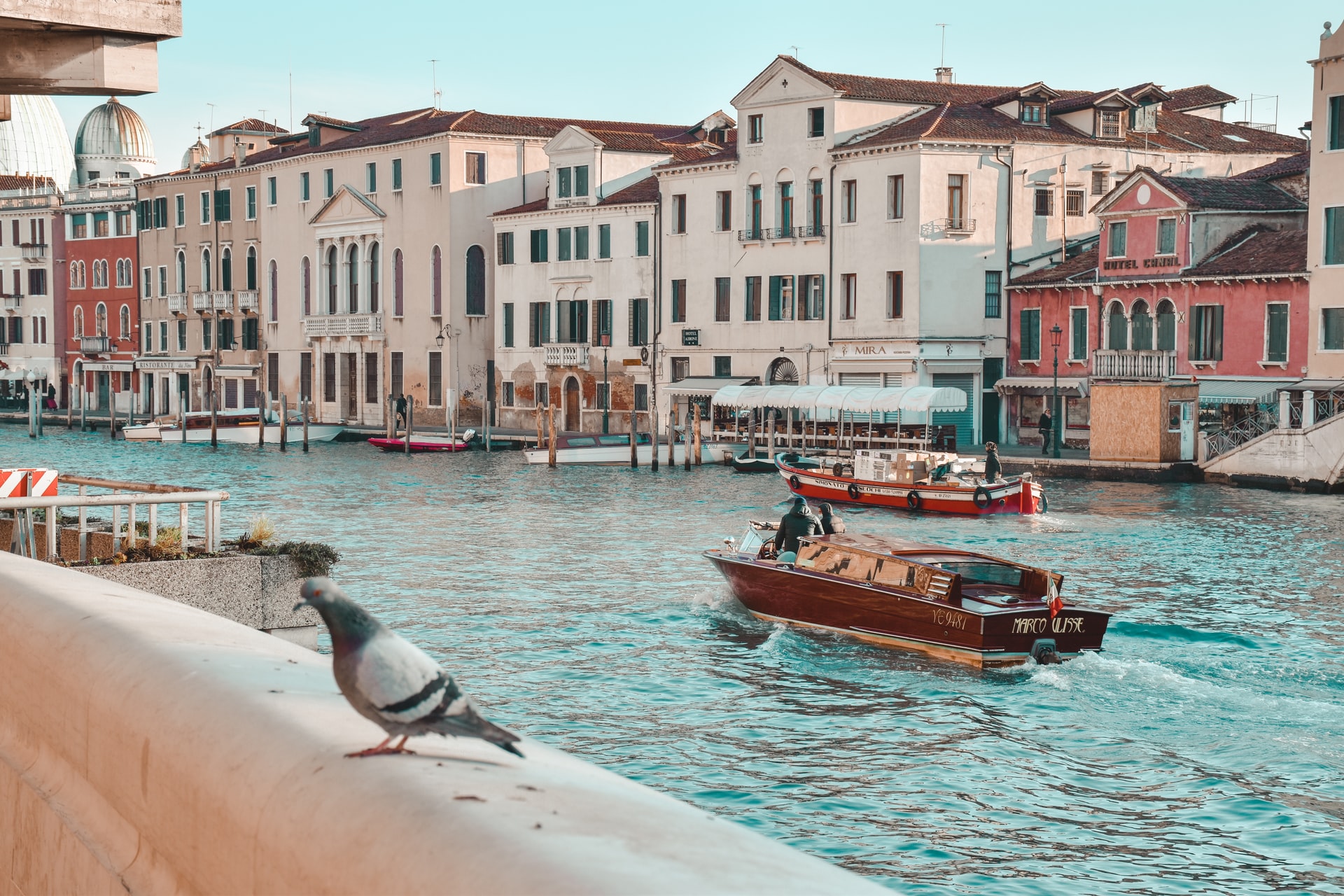 Venice, Italy, is tourist-central during the high season, its narrow streets and open piazzas teeming with holidaymakers and residents alike trying to pass each other. Watching over all from perches on high or scurrying between the many feet are, according to the latest estimate, 100,000 pigeons – almost twice the residential population. Where did they all come from, and how does such a small city cope with that many birds?

Known as The Floating City, Venice comprises 118 islands sitting in the shallow Venetian Lagoon, separated by canals and connected by over 400 bridges. People have been flocking to this extraordinary and evocative landscape for centuries, either in the form of merchants ferrying goods and slaves across the Adriatic and beyond through the Mediterranean Sea, or as artists, financiers, writers, actors, and naval military. These days, tourism is the lynchpin to the city’s economy. People come from all over the world to experience the architecture, art, music, and food, not to mention the romance that flows along the waterways of the two and a half square miles of the city.

One recurring theme that you have probably seen if you’ve ever looked at holiday snaps, spoken to anyone who has been there, or been there yourself, is the ever-present cooing, flapping, and pecking of thousands of Columba livia domestica: otherwise known as city, street, domestic or feral pigeons. They are everywhere, perched along roofs, atop columns and archways, jostling on bridge buttresses. They skulk in café doorways, on hotel steps, crowding out the piers of gondolas and foot ferries to other islands. They peck along the sills beneath stained-glass windows of chapels and concert halls and the Basilica, the cathedral that dominates Piazza San Marco on the main island. Not even the many winged lion statues, the emblem of St. Mark after whom the cathedral and square are named, are free from their four-toed grasp.

How did so many birds come to accumulate in such a relatively small place? What is the effect of having so many birds in one area, and how do the locals feel about it?

Looking at the latter questions first, it can be reasonably safe to say that this huge number of pigeons has become a bane to residents’ lives. The overall cost of keeping the city clean of the inevitable whitewash of their poop and urine is phenomenal, with one study a few years ago placing it as an extra annual tax burden of €350 per resident - it can only have gone up. A special cleaning machine is deployed every night in St Mark’s square during the high season, and every evening business owners hope for overnight rain to help shift the thick covering of whitewash from their steps and pavements outside. The old wives’ tale of being pooped on bringing good luck probably wore quite thin quite soon in Venice.

But the pigeons have long been a unique draw for the city, making people laugh or shriek depending on their temperament, a popular social media post to show friends how many birds you can fit on your head. Until relatively recently, you could buy bird food from vendors in the tourist hot spots, and scatter grain all around you, or even on top of you, to get that Instagram post of a “pigeon jacket”.

From food to friend

In 1982, Jan Morris, author of A Venetian Bestiary, wrote that pigeons were "if not actually sacred, then at least highly respected … Pigeons can get away with almost anything in Venice”. Their origins were heavily intertwined in a mix of religious ceremony and the love of food. According to tradition, pigeons were released in small numbers from the gallery of the Basilica on Palm Sunday, paper tied around their feet to weigh them back down to the square, whereupon the citizens would promptly dispatch them to the cooking pot. Those that survived the event were said to have earned the protection of St Mark, and were left alone to roost among the golden domes. It is those forefathers and mothers who have produced the huge colonies that soon expanded across the city in the next few hundred years. Prolific breeders, pigeons soon occupied every veranda and walkway. As tourism in Venice grew in the 19th and 2century, visitors loved them – having become quickly accustomed to humans, they became known as some of the tamest birds around, granting a rare opportunity to become close to a wild creature.

Eventually no longer destined for the dinner table as tastes changed and other animals took precedence on the platter, the pigeons were warmly fed over the years by the citizens, happy to have these jovial and good-spirited companions of the sky. The 1950s even saw this practice incorporated into an advertising gimmick for an insurance company, when every day in the main square before dawn, employees would painstakingly place piles of grain in the shape of the company’s initials, A G, for this offering only to be obliterated in seconds by the voracious pecking of so many beaks. Wedding-goers would throw handfuls of rice at the happy couple emerging from the churches, and the pigeons hungrily joined in the celebrations.

But this boom was not to last. Concerned about the scale of the clean-up operations and the damage to the city’s famous facades as the birds pecked away at the stone, seeking out leftover grain and rice in crevices and nooks, not to mention the risk of disease (even though this was small), a hard decision had to be made. As remarked upon in Robert Service’s semi-revenge poem The Pigeons of St Marks, “Something’s wrong in Pigeon-Land” – in 1997, the authorities banned anyone from feeding the pigeons except in the main tourist draw destination, Piazza San Marco. Of course, this only led to the pigeons becoming focussed in one spot, ensuring flapping platoons bombarding anyone who passed by. Whilst grain vendors made a pretty penny from eager animal lovers, the situation was declared untenable, and in 2008, a city-wide ban finally came into force. €500 fines would be issued on the spot for any well-meaning but sneaky transgressors.

The decision to ban feeding was met with relief from most of the city’s residents, but there were those adversely affected: the vendors, outraged at their livelihood cut short, had to seek out other employment; the tourists, though they can still enjoy the company of birds, perhaps for likes and retweets; and the pigeons themselves, now seen frequently hopping into bars and cafes to seek out what food may have succumbed to gravity there. But pigeons are tenacious, resourceful, and resilient, and their numbers are not showing any signs of dwindling yet. Even though the city on the water no longer welcomes them with open arms, they are still there, and if you are ever in Venice, at least give them a smile and a nod in passing to their once great lineage.