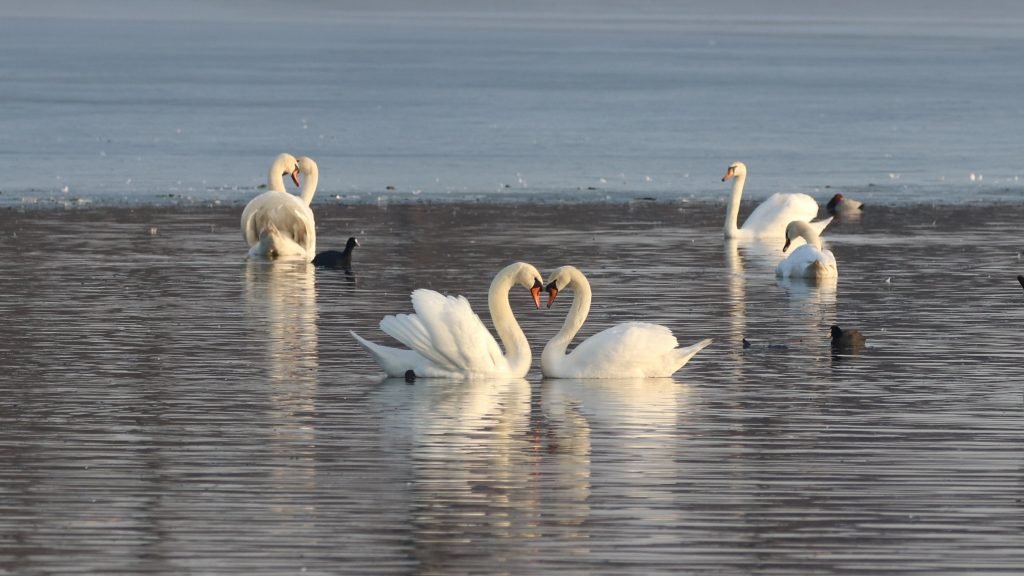 In the Middle Ages St Valentine’s Day was said to be the day when all birds found a mate and breeding season began, which is why so many of us associate birds with love these days. In today’s post, we take a look at seven of the most popular feathered symbols of romance.

The dance between two grebes partnering up is lauded as one of the world’s most impressive courtship displays, and is spectacular to watch. They begin sussing each other’s compatibility out by making head twitches, small timed dives, and cheek to cheek manoeuvres, matching each other’s moves and improvising new ones to follow; occasionally, gifts of weed or twigs will be presented.

They will spend a long time in mourning if their partner dies.

Once the bond is established, the dance culminates in a gravity-defying synchronised sprint across the water’s surface, feet frantically paddling and keeping neck to neck and chest to chest, leaving a sparkling wake behind them. The relationship now sealed, they head off across the water searching for nesting sites, a newlywed couple seeking out their first home together.

These striking birds usually pair for life and will also return to the same nest site each year to raise more chicks. Little is known about whether they stay in contact over the ocean’s expanse when breeding season is over, making their land-based liaison more akin to a holiday romance.

Of course, it is perfectly possible that they do ride the waves together, but one thing is certain, if they do have an on/off relationship, the bond is strong when united again, as can be seen by the way they bump beaks and peck each other on the cheek in a courtship display known as “billing”. Puffins live for about 20 years and become sexually mature at 5, so this commitment to each other is remarkable.

Many will have heard of Wisdom, the oldest known tagged wild bird in the world: she is a 70-year-old Laysan Albatross who spends her breeding season with thousands of others on the Midway Atoll, a former military base, now owned by the US Fish and Wildlife Services and a sanctuary for seabirds of all hues.

In 2021, Wisdom arrived a day earlier than her usual schedule in late November and headed straight to the nest site she has shared with the same male for several years, but Akeakamai didn’t show this year, and she was last seen on Dec 5th so it is thought she headed back out to sea.

The dance culminates in a gravity-defying synchronised sprint across the water’s surface.

Despite this setback, it is not unusual for albatrosses to skip a year, as they live exceptionally long lives. Their courtship dances can last from hours to days, and when matched, they immediately build a nest and then mate. After laying a single egg, they take turns incubating to ensure even warmth whilst the other forages at sea, and when the chick hatches both parents look after its wellbeing.

It can take around 8 months of dedicated care from laying to fledging, so albatrosses only mate when it is certain there will be two to share the work. Albatrosses never “divorce” and only seek another mate if the other dies.

Also mating for life, swans symbolise love and romance, and a strong family bond, as they raise their cygnet chicks together. The most striking and moving thing about swans in written lore, though, is that they will spend a long time in mourning if their partner dies, and many will not seek out another, preferring to end their days alone.

The classic photographic shot of two swans facing each other with their bowed heads and necks forming a love heart shape can be seen on Valentine cards and wedding invitations everywhere.

One of the smallest members of the true parrots, lovebirds are very active birds that are popular as pets, although they do require an awful lot of attention. Comprising nine subspecies, their near-mythical status as the epitome of being deeply in love is based on their capacity to become instantly besotted with each other to the point of ignoringall others around them.

They are very sociable and affectionate birds but they will literally spend hours huddled up close to their partners, which is why the name bestowed upon them by English naturalist Prideaux John Selby in 1836 was Agapornis; in Ancient Greek, agape means love and ornis means bird.

Canada geese are so devoted to their partners that if one of them becomes injured or sick, the partner won’t leave them, staying by their side keeping watch over them until they recover or die. Should this vigil last as winter approaches and the rest of the flock moves on, no matter – the geese stay put, protecting their beloved. Like swans, geese grieve, and many will spend the rest of their lives alone, never mating again.

90% of bird species are monogamous, and this includes doves who choose a partner for life or at least for several breeding seasons. The two will share the nest-building, incubating and chick-rearing responsibilities. Doves have been immortalised in scripture, scrolls, marble carvings and tapestries the world over since their first recorded use as a symbol for love, sexuality and war as an icon of Inanna-Ishtar, an ancient Mesopotamian goddess. They have been found on objects dating back as far as the third millennium BC.

Doves became a symbol for peace rather than war in the first book of the Old Testament of the Bible, Genesis, when Noah released one from his ark and it returned later holding an olive branch in its beak, a sign that the waters had receded and land could be found once again.

Whether for military or pacifist reasons, love has always followed these stout-bodied slender necked birds around, and they are often regarded as having kind and gracious souls, as opposed to their very close and somewhat rowdy relatives, the pigeon – but even pigeons mate for life, so there’s some hope for us all.