Back to tales
Bird facts
,
Anatomy
, 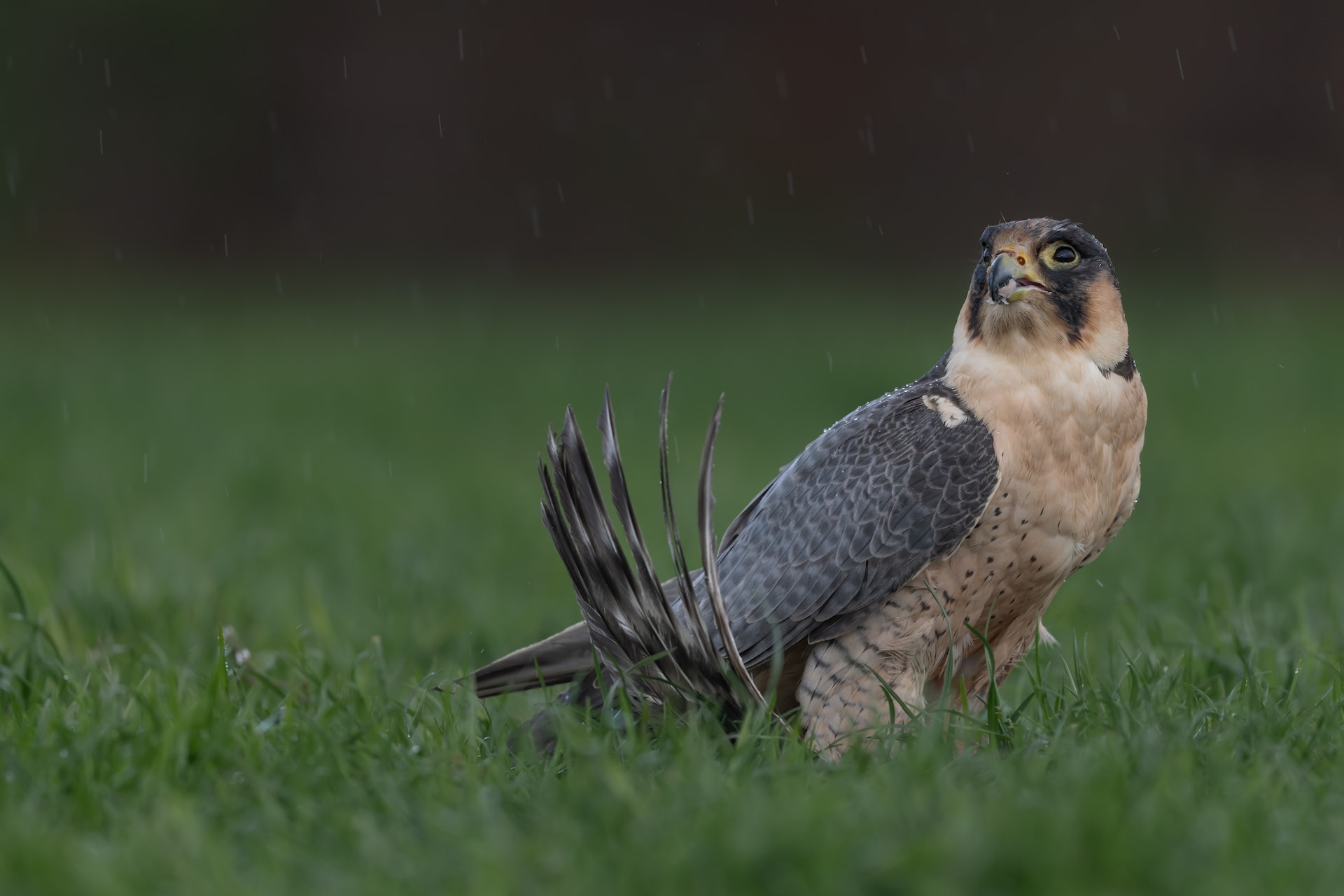 Breath-taking speeds, monumental stamina and predators-par-excellence, fast birds have fascinated mankind for centuries. An argument about which game bird was the fastest bird even led to the creation of one of the most famous record-breaking reference books of all time.

Widely cited as the fastest bird and animal on Earth, the Peregrine falcon can reach speeds of around 200 miles / 320 kilometers per hour when engaged in its signature hunting dive, known as a stoop.

To execute this dive, the bird must first soar to great heights, sometimes over a kilometer up, then tilt headfirst back towards the ground at a tight angle. Tucking its magnificent and slightly tired wings close to its body to create the most efficient streamlining, it uses gravitational force to plummet back towards earth with alarming haste, aiming right at its poor unfortunate prey who is probably happily flapping along far below, oblivious to the airborne death headed its way.

The fastest recorded peregrine stoop was an incredible 242mph / 349kph plummet. Little wonder it is described as the fastest bird and animal on the planet. But there are detractors that say, well, yes, in one sense, but also no, not in others.

The way in which the speed of birds (and indeed, all animals) is measured has been the subject of much discussion over the years; some say it doesn’t count unless it is speed while flying, others that it is the maximum speed at any given point in the bird’s behavior, or only the average speed overall as the benchmark.

It is actually arguments very much like these that led to one man, Sir Hugh Beaver, then managing director of Guinness Breweries in Ireland, hitting upon the genius idea of a reference book that could probably assist.

Earlier that day he and a shooting party companion had sparred over whether the red grouse or the golden plover was the fastest game bird (he was put out that he had missed a golden plover, claiming it evaded his shot with its speed – it is, however, the red grouse).

Mulling his book idea out loud one day, a fellow Guinness employee directed Beaver to some University friends, the McWhirter brothers, who had recently founded a fact-finding agency supplying newspapers, encyclopedias and advertisers in London with up-to-date information.

A collaboration was born: in 1954 a loose compilation of such facts was created and a limited run of 1,000 was published and distributed free of charge to gauge public interest; these swiftly vanished. In August 1955 the 1st edition of the Guinness Book of Records went on sale, topping the Christmas bestseller list.

To date, the annually revised compendium has sold more than 100 million copies in over 100 countries and 37 languages. All from a discussion about the fastest bird.

Which bird is the fastest bird?

Researchers use Doppler radar and GPS to determine bird flight speed for many of our known species, finding that most have an average speed somewhere around 25mph / 40kph, although there are notable species like racing pigeons, ducks and other water birds who can fly twice that, like the red-breasted merganser, once clocking in at 100mph.

On a windy day, head- or tailwinds greatly influence a bird’s speed, used to survival effect in migration, and you can believe that all birds fly faster when escaping a predator, or chasing prey, or a potential mate. But most claims of the fastest this and that are using a singular instance, the highest recorded individual flight speed, rather than the average flight speed.

To the peregrine, then: yes – it is the fastest bird and animal in the world if you’re discussing gravity-assisted flight. The other famously cited fastest animal on earth, the cheetah, can indeed run faster than any other animal out there, but only for a short amount of time: it can’t sustain its top speed of 80mph / 130kph for more than a minute. Ostriches, on the other hand, can run at speeds of 45mph / 70kph for around half an hour. In terms of longevity, the ostrich can therefore be said to be faster.

Beaten by a bat

For many years, the Gray-headed Albatross was believed to be the fastest bird. In 2004, level-flying researchers in the level-flyinglevel-flying sub-Antarctic recorded one individual traveling at 78.9mph / 127kph for a jaw-dropping eight hours during a storm.

However, despite the stamina that was surely involved, this figure was universally disregarded due to the presence of the tailwinds during the storm; it was simply not possible to know if the bird could sustain that speed on its own.

Rumors about a migratory bird from Asia known as the spine-tailed swift allegedly living up to both parts of its name used to persist, claiming it could fly at 105mph / 169kph, but this was always anecdotal and never scientifically proven.

In 2009, however, a research team from Sweden’s Lund University believed they had identified the fastest bird on the planet, the Common Swift. Using high speed cameras, they measured one bird reaching speeds of 69 mph / 111kph during a “screaming party”, or mating flight.

But then, along comes 2016, when scientists in South America managed to record the level-flying speed of the Brazilian free-tailed bat; to date, this animal still holds the record at 99.5mph / 160kph. Swift fans need not be affronted, however – it still holds the record for the longest uninterrupted flight, a phenomenal 10 months on the wing.

Bird flight speed serves a basic purpose: hunting, travel, and courtship. Lists about the fastest birds and other animals on the planet do need to be treated with a little license – there will always be a counter-argument to one person’s claim using a different set of criteria.

Unless our arguments lead to something genuinely useful like the Guinness World Records, perhaps we should leave the heated discussions to the comments section, and just go outside, look up at the birds speeding across the sky, and simply marvel at how amazing it all is.