Space Invaders - What Birds Put Their Eggs In Other Nests? 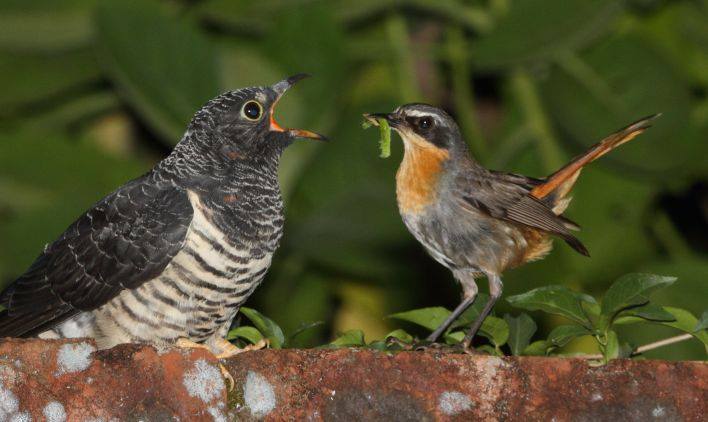 Known as the messenger of Spring, a cuckoo’s call has been welcomed by many as the coming of good weather and the start of the growing season, but perhaps not all are thrilled by the return of this long-tailed bird…

It may be a little harsh to single out a cuckoo but it’s safe to say that these birds have played a role in human culture for many years, taking on many guises. In Europe, it is known as the bird that heralds the arrival of Spring as some of the temperate species are migratory and always arrive when the weather changes from wintery chills.

In other cultures, it is revered as a god of desire, or a symbol of unrequited love. You can also be crazy as a cuckoo, a phrase thought to possibly originate from the two-note call relentlessly sounding in the wilderness, (as in Shakespeare’s Henry IV Part 1, “Heard, not regarded”), or perhaps from the anecdotes of British colonials sent mad from having to listen to the loud and monotonous cuckoos of South Asia, where they are known as “brain-fever birds”.

A second theory for the origin of the crazy moniker dwells on the fact that of the 127 species of cuckoo in the world, 59 of those are brood or nest parasites: placing their eggs in the nests of other birds and using the parental instincts of that bird for their own species’ success.

Some may say that finding ways to get someone else to raise the kids is actually quite clever, but human history has eschewed that cynicism and deemed this behaviour to be reckless, foolish and lazy.

A “wolf in sheep’s clothing” tactic.

It may be easy to fool some men, but how do these birds get their eggs in the host nest in the first place? Surely, it’s quite obvious when another bird plonks down beside you and pushes an egg out?

Some species of cuckoo have developed a few cunning strategies to having their presence or their eggs’ presence go undetected. In some cases, males have been seen to lure birds away from their nests by mimicking the call of the male host species, so that the female thinks her luck is in, and then the female cuckoo can sneak in.

Some cuckoos have gone even further and evolved a tactic known as egg mimicry.

A handful of species from the Old-World cuckoos have evolved bars on their wing undersides and possess decurved bills, in effect resembling raptors, a “wolf in sheep’s clothing” tactic to momentarily scare away the host for that egg laying opportunity. Other species simply wait for the host to vacate the nest for whatever reason and then hop in and lay their own.

There are also the remarkable evolutionary steps that the female has developed, such as a few species will leave their dark coloured eggs in nests whose hosts lay light coloured eggs, but only if the nest itself is in a very dark place or has a dome structure, restricting light.

Some cuckoos have gone even further and evolved a tactic known as egg mimicry - they lay eggs that closely resemble the eggs of their chosen host in shape and colour. Whilst noticeably larger to many eyes, the similarity of the eggs is simply thought to be enough to never raise any suspicions.

This forced parenting has, over the years, resulted in the development of certain behaviours in the hosts such as frequent egg rejection, which sadly also often results in rejecting their own eggs too. Some cuckoos have then tried to counteract this rejection and will lay multiple eggs in one nest, leading the host to use a process of elimination strategy: as brood success is paramount, and if the majority of eggs are the same, it must be that the fewer amount of different egg types is bad.

Thus, the desperate parent unwittingly throws its own unhatched children to the ground, leaving the parasite eggs safe and warm. This system of the host evolving to protect what’s theirs, and then the parasite developing a counter-strategy, is known as an evolutionary arms race, and will continue ad infinitum.

But how does a bird like the reed warbler (a favourite of the Common cuckoo to hijack), whose chicks weigh as little as 5g and are no bigger than a dime, not notice this lumbering oddly shaped beast that’s at least three times the size occupying the same nest?

The parent bird has already invested in the egg development before they’ve hatched – they’ve kept it warm along with all the others and time will have passed where this now seems normal.

Female cuckoos have of course also developed another cunning ploy where she can hold onto the egg in her oviduct for around 24hours longer than most birds; this part of her body is a few degrees warmer than the final destination nest and that increases embryo development while still unlaid – normally, this development occurs during incubation.

They even have a scoop-shaped back and squirm under the other eggs and flip them out.

This means that the cuckoo will hatch first, and many cuckoo chicks will then kick out the other eggs; indeed, they even have a scoop-shaped back and squirm under the other eggs and flip them out. If some eggs are not removed and the chicks make it out alive, the larger and more developed cuckoo will kill them.

Most of the time, cuckoo chicks are the only ones left standing and demand sole attention from the parent bird, whose instincts will be to pander to its needs; it is rare a cuckoo is abandoned.

A wonderful counter-attack example to this ruthless strategy has been seen in superb fairy wrens in Australia, who will call to the eggs during incubation. Upon hatching, if the chicks don’t or can’t call back in the same way, any chick that doesn’t give the “password” is booted out. Studies have shown that the ejected chicks are always the cuckoos.

But we can’t vilify cuckoos alone: it’s thought around 100 bird species practice nest parasitism. In North America, Brown-headed cowbirds do this and they have a vast range of host species, targeting over 220 species.

But it is now thought that some of those species are under greater threat due to habitat loss and fragmentation. The Kirtland’s Warbler is one such victim hit by the double whammy of cowbird and human encroachment.

These small songbirds haven’t yet learnt to tell the difference between warbler and cowbird eggs, and the combined success of the cowbird and the decrease in nesting opportunities means these warblers are now endangered; at one point there were fewer than 200 pairs left.

Unfortunately, a regime of culling cowbirds has been implemented to help this species survive, rather than we stop obliterating their environment. Only time will tell if and how the warblers will develop their counterattack; hopefully they will survive long enough to do so.

The next time you hear a cuckoo call across the air, by all means allow yourself to feel warm inside at the thought of clear and sunny days ahead; but perhaps spare a thought for the turmoil that awaits elsewhere. Nature is indeed red in tooth, claw, and wing.