Bug Diet: All About Birds That Indulge in Insects 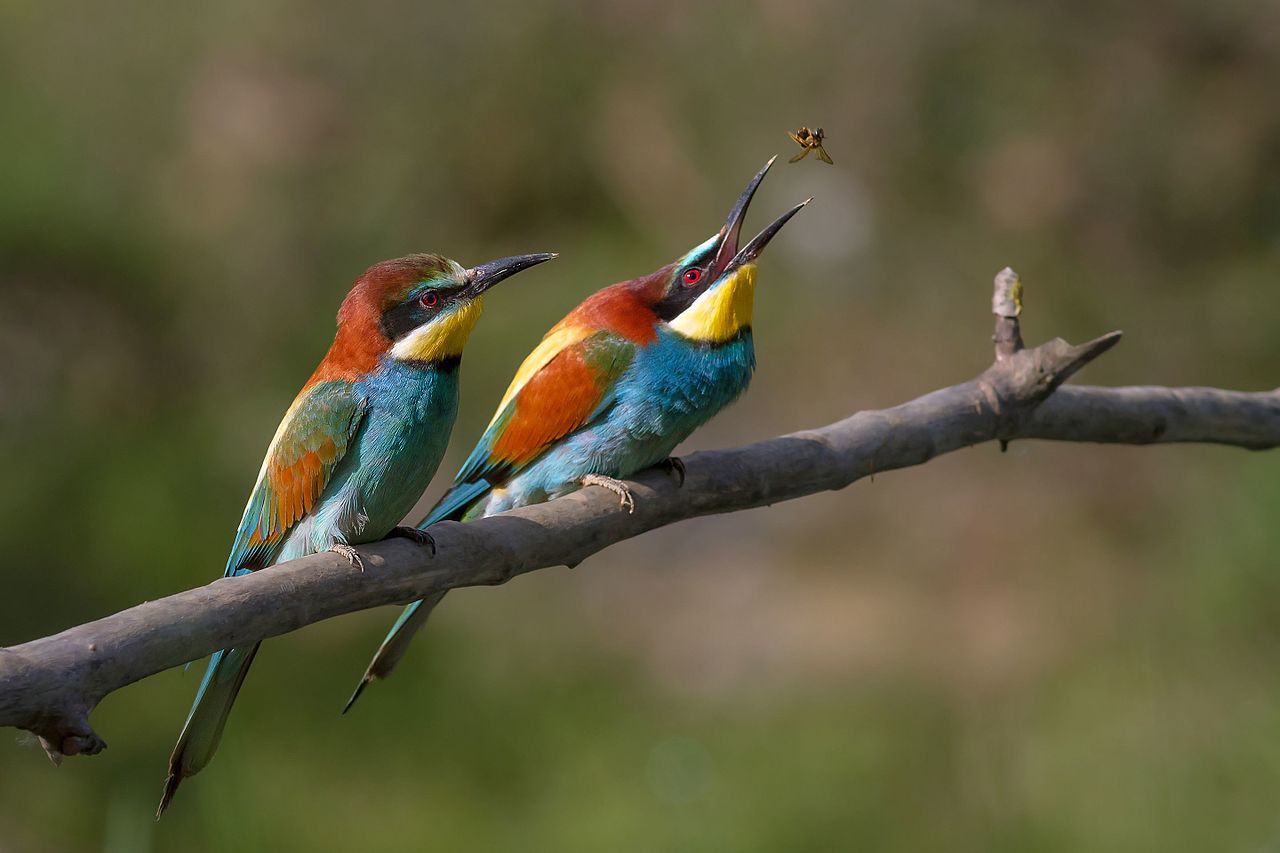 Crunchy, protein-rich insects are the most abundant life form on the planet by far, and some species of birds literally can’t get enough of them. We take a look at some of those species who go a-hawking for their stomach’s fill.

At any one time in the world, there are thought to be somewhere in the region of, give or take a couple of hundred thousand, 10 quintillion insects. That’s the number 10 with 6 sets of three zeros after it. I’m not even going to try to visualise that for you. OK, I lied, I’ll try. It’s the equivalent of 1.3 billion Chinas. Did that help?

Suffice to say that’s a lot of insects, so usually that means a veritable buffet for the insect-eating birds of the world. Many birds will have insects as part of their diet, even if only as a nestling, needing to grow from that crucial source of protein, but their true diet often changes as they mature. To be considered an insectivore, the insect proportion of the adult diet must be quite significant.

Butterflies are avoided as, apparently, they don’t taste very nice.

It is thought that insect (and spider) eating birds consume somewhere in the region of 500 million metric tonnes of insects a year, which is roughly the equivalent to how much fish and other meat humans the world over eats in a year. Aphids and ants, mosquitoes and moths, all manner of arthropods are gobbled up in their thousands by each bird, insects that may otherwise have decimated crops, spread diseases, damaged structures, and so on.

One bird that wears its diet on its name badge is the bee-eater; these uniquely hued and shaped birds exist in many parts of the Old World except the northern latitudes, comprising 27 species across three genera.

Their main diversity is centred in Africa, then Asia, then there is a single species each in Europe, Australia, and Madagascar. Highly social birds, photographs often depict them sitting so close to one another in groups or in pairs that their richly-coloured feathers seem to merge.

Like all insectivores, bee-eaters are not exclusive to their name – whilst their diet is predominantly wasps and bees, they will happily gorge on beetles, mayflies, dragonflies, hornets, stoneflies, cicadas, termites, crickets and grasshoppers, mantises, true flies and moths; but butterflies are avoided as, apparently, they don’t taste very nice.

These birds are part of a group of insect eaters who have a specific way of feeding – on the wing. Aerial insectivores will only ever catch their food in flight; they will hunt out into the air from a perch, a technique known as hawking, but they won’t snap it up if it just happens to land or wander past whilst the bird is still. Bee-eaters have exceptional sight and can spot their prey from up to 100m away.

Prey is always caught from behind, and whilst smaller insects may be gobbled up instantly, larger wasps and bees will be taken back to the perch where they are unceremoniously beaten to death and broken up on the branch or rock and the pieces eaten. Any insect with a poisonous sting is first smashed rump first onto a surface and then, whilst the bird keeps its eyes closed to protect itself from splashback, the venom is pushed out from the ruptured sac, and the rest of the insect is safely consumed.

Scourge of the tiny vampires

Some bird species do their best to keep mosquito populations down, like barn swallows. There are 75 species of swallows throughout the world, and they all love mosquitoes.

Barn swallows live all around the world, using their horizontally wide mouths to scoop up insects as they fly. Swallows eat their body weight in mosquitoes and other insects every day, which is great news for many of us.

Like the barn swallow, eastern kingbirds catch their prey in mid-air. These superb aeronauts are a member of the aptly named tyrant flycatcher family, and their scientific name is wonderful – Tyrannus tyrannus. They can be found across most open spaces in America, and whilst they will eat berries and seeds in colder seasons when there are fewer insects available, during spring and summer, they dine out on nature’s airborne harvests of tiny, bitey demons.

It’s the equivalent of 1.3 billion Chinas.

Encouraging birds like the swallow and kingbird to nest near your home can help reduce mosquito and fly populations, making it far more pleasant to enjoy the sunny warm days of summer without fearing for your blood.

There has been a noticeable decline in birds who rely on aquatic insects for food, and that has been linked to the increasingly poor quality of lakes and streams around the world. Many lakes serve as huge resources for insectivorous birds as both a stopover site during migration and a breeding site, like the Great Lakes in the United States.

A paper published here in February 2021 concluded with the simple and obvious but often overlooked message that water conservation naturally means aerial insectivore and other wildlife conservation, which in turn means human conservation.

The ecological service that birds provide simply by eating as much as they can should not be underestimated: many types of insect are considered pests, and bird predation regulates populations and helps prevent outbreaks.

Researchers have been attempting to place monetary values to the numbers of insects consumed by birds to persuade authorities that their budgets would be more worthwhile being spent on the conservation of these habitats, rather than very expensive, wholly inefficient and potentially harmful artificial or chemical pest control.

Whilst this strategy is difficult as no global estimate currently exists, figures have been reached using known regional budgets - $4,000 per hectare of Jamaican coffee plantations, for example, or almost $1,500 per kilometre of worm control in the commercial forests of north-western U.S.

They dine out on nature’s airborne harvests of tiny, bitey demons.

In America, a controversial Trump-era rule has left more than 70% of the country’s waterways, millions of acres of wetlands and millions of miles of streams, unprotected; and while those and other rules are being reviewed under the current administration, permanent damage may have already occurred to many sites over the past four or so years.

Whilst the science world waits for the hoped-for repeal (which many are confident is coming), mining companies, developers and property owners are scrambling to get approvals for permits to dredge and fill as many streams, lakes and wetlands as they can before Biden-Harris scraps the Trump rule.

Birds who live in woods and forests consume the lion’s share of insects in the world, around 75% compared to those who inhabit the savannas, waterways, grasslands and croplands, and those living in the deserts and Arctic tundra.

Many birds forage for grubs and bugs on the ground, beneath strips of bark, under stones and logs. Studies like this one have shown that these birds are in steep decline due to various urban development and land management practices; birds forage beneath the leaf litter and in decaying piles of woodland, and among the myriad nooks and crannies of the canopy; but manicured parks and other grounds as well as the wide-scale removal of parasitic plants like mistletoe have reduced their offerings dramatically.

Whilst change needs to happen in all areas of conservation, we can all do our bit to help on a small scale, putting up artificial nests and providing water sources, or by leaving areas of our gardens and yards “untidy”; and by just remembering that diversity is life, and no habitat is whole without it.