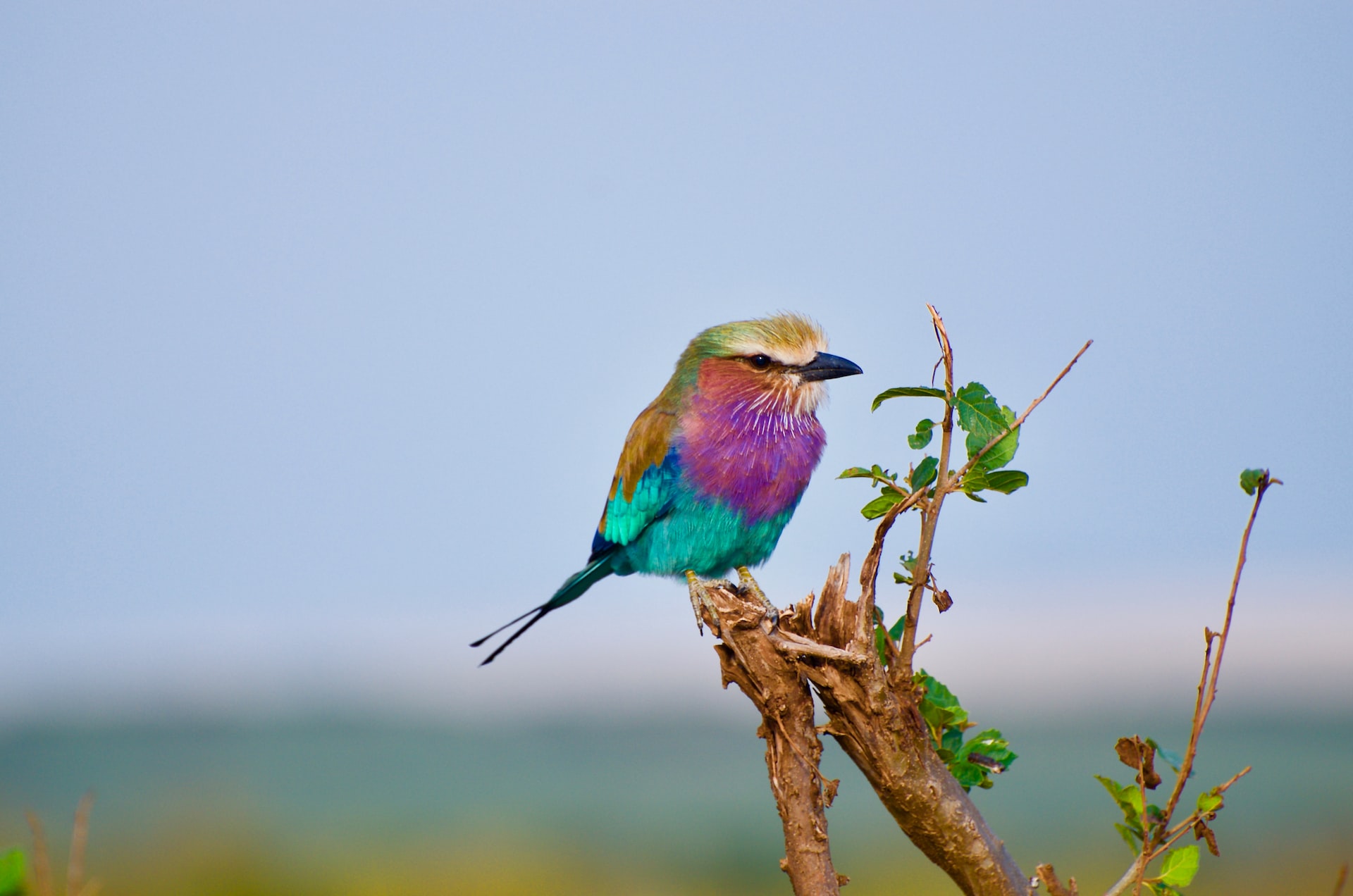 How do birds touch if they don’t have any hands? Can they hear anything underneath all those feathers? Birds have some jaw-dropping adaptations to help them survive in a world that is mostly geared against them. We look at how each of their senses is highly attuned to make the most of their environment.

The brain is an alien, unfathomable and weird looking organ that presides over much of life, and studies have been underway to understand how it works for centuries, and we’re still not sure. But we do know a lot about the way information is sent to it via various receptors such as our eyes, our hands, our ears. These conduits of information are known as the senses, and birds have them in spades.

They are considered to have a sixth sense in the context of migration navigation.

We possess five senses: sight, hearing, touch, taste and smell. Birds also share these, and sometimes they are considered to have a sixth sense in the context of migration navigation, although many argue this is simply a combination of the original quintet; that doesn’t answer the unanswered question of how do they know where they are going, though…

All the better to see you with

Birds rely on sight far more than any of their other senses, not least so that they can see where they are going when they’re flying. But their whole lives depend on sight: to find food, a mate, and to detect predators.

Eyes have more or less the same characteristics throughout the animal kingdom: a retina to absorb and interpret the incoming light; cones and rods packed on this retina to determine between colours for the former and black, white and dim light for the latter; the fovea, which is a tiny pit on the back of the eye that provides clear vision; and the optic nerve, for conveying this information to the brain.

A human eye takes up around 1% of the total weight of the head, but bird eyes can be up to 15% of it. The size of a bird’s eye is the largest with respect to body size of all of the world’s animals, with some owls and hawks having eyes that match the size of our own. This scale-up in size of all bird eyes is intrinsic to their ability to detect even the slightest of movements from many metres away.

There is a significant difference in bird eyes that enable those with superior sight: birds are often bifoveal – they have two of those pits that bring clarity of vision. When we focus on something it is our fovea in action – but this means we lose a lot of peripheral vision.

Having two eyes provides that overlap of binocular vision and assists with depth perception, but birds who have two eyes with two fovea means they have a broader field of vision and focus, making judging distances and therefore speed of approach far easier to interpret. Birds who have this ability tend to live in “open-country” habitats, like hawks, eagles, parrots; some species of terns and swallows even have three of them.

Seeing in dim or bad light is an exceptional ability to possess. Birds that are active in the day, diurnal, will have more cones than rods on their retinas to see all the colours the world presents, but birds who are nocturnal will have more rods. Barn Owls, for example, can see an object two metres away with an illumination of 0.00000073 foot candles: that means, if you could do that, you’d be able to see an object by matchlight a mile away.

Eyes are so incredibly valuable to birds that they have an extra layer of protection as well – the nictitating membrane. This is a specialised cover between the eye and the eyelid covered in tiny bristles that cleans the eye regularly using tears, sweeping away dust and debris, when it blinks; bird eyelids are only used for sleeping. Diving birds have a clear centre to theirs so that when they go underwater the whole of the eye is protected but the middle serves as a contact lens.

‍The acuity of bird eyesight has long been discussed and it was once thought that they possessed some super-ability to see, and whilst their sight is on the whole superior to ours, (some birds like hawks, songbirds and hummingbirds can see around 2.5 times better), there are some birds such as vultures who see about the same as us, and some birds like chickens who see a little less as well as us.

Do you hear what I hear?

Next up in terms of importance is hearing. Bird ears sit slightly below and behind the eyes on the head, and are more like holes on the side rather than what we perceive as ears with an external protrusion of skin.

Most species have small specialised feathers to cover the opening to restrict airturbulence, and some owls are named after the specific type of feathery tufts they sport on either side of their heads, but those are not ears. Incidentally, the shape of an owl’s face helps channel soundwaves to their ears for one-upmanship on other birds, helping them hunt at night when vision is restricted.

Bird ears are shaped like funnels to focus soundwaves more efficiently. Whilst they have a smaller range of frequency than we have, unable to hear high- or low-end sound waves, they are more sensitive to changes in rhythm, pitch and intensity of sound; they can tell the difference between frequencies that differ by less than 1% as well as sounds that are separated in time by 0.6 to 2.5 milliseconds.

The shape of an owl’s face helps channel soundwaves to their ears.

When in a flock of a few hundred birds, this can be incredibly useful, especially if you are toward the back and the ones in front are dishing out navigation cues. They are of course able to tell the difference between the many calls and songs from very far away, either for territory, or warning, in much the same way we can “feel” the difference between a muffled argument in anger or a loud enthusiastic conversation through a thin wall in a house; except birds hear all the “words” too.

One touch of nature

Whilst not as fundamental as part of their being as it is for us, birds do experience touch as a vital sense, especially when flying; factors like wind speed, air temperature, humidity and weather pressure systems are transferred by the movement of feathers to receptors in the skin and so to the brain.

Some birds also sport fine whisker-like feathers around their beaks called rictal bristles that assist with seeking out insects or the inner surfaces of cavities. The kiwi bird is considered to have the shortest bill in the world as it is actually classed as beginning where the nostrils are, which for kiwis is at the very tip. They use this sensitive tip of their bill to probe for food deep in the earth.

In order to minimise damage to the unfeathered parts of their bodies, birds have very few nerve endings in their feet, which is how they can tolerate standing on ice and snow or hot sand or earth for long periods of time.

A taste of things

Bird’s sense of taste is not all that great, which explains how they can eat so much suet. They can experience the same sweet, savoury, bitter and salty tastes as us to a degree, but they have far less taste buds on their tongues; we have around 10,000, and they can have up to 500 but usually more like 50 or less. Some birds can eat the hottest chilies in the world but this is not to do with taste, but pain. Find out more about how they can do that here, and try not to be jealous.

When birds show a preference for a certain type of food, it won’t be because it “tastes nice” – it will be because it is more available, is easier to consume or digest, or has a higher nutrient value to it, although sea birds can tolerate saltwater but will prefer to drink fresh water if they can find it.

Many birds learn not to eat certain things from experience or passed on through social interactions, and bitterness seems to stand out for them. For example, milkweed is bitter and poisonous to birds, but Monarch butterfly caterpillars eat milkweed as well as many other types of vegetation.

Blue jays have learnt to not eat the caterpillars that have dined on milkweed, but will peck at them first to see what it detects, and discard if necessary.

When we describe smells, we always use the words of other things: smoky, sulphurous, fruity; birds may not use words but if they did, they probably would go so far to say “dead things” or “live things”. It has been proven that vultures can’t locate carcasses if they are covered, but in terms of a sense of smell, birds seem to be oblivious to any nuances.

Antarctic sea birds seem to be able to detect the blood and fat of any meat on the water’s surface, and Leach’s petrel locate their nests by flying downwind and into the wind blowing over the colony, but on the whole it has been found that the olfactory centre of bird brains is not very developed.

There is a worry that birds can smell us on their chicks if we handle them, and for some birds this could be the case so we do advise caution, but there is little evidence to support chicks being abandoned because we touched them.

What may seem gentle to us may be painful for them.

They are more likely to be abandoned because they were ill or damaged when they fell out of the nest, which is why we then stepped in to help; evidence of our contact is secondary or non-important.

If we consider what a bird sees, hears, touches, tastes and smells we can be more aware of our actions when we are around them. We know that birds can feel things via their feathers but we don’t know what it feels like; what may seem gentle to us may be painful for them, so try not to handle birds, and never remove any feathers that you think are “dangling” or coming off; this will likely be part of the moult cycle and any force can damage nerve endings irreparably.

Wear neutral clothing if you want to be unseen when out birdwatching; bright colours will be distracting and can highlight your presence, and don’t make any loud or shrill noises if you don’t want to scare them away.

Filling your garden if you can with trees and bushes is a great thing to do for birds for their protection and food sources, but be aware you won’t be able to entice them in with any heady scents, although of course you will probably get some insect passage which will be essential to the diets of some birds.

Being aware of the birds around us and what they may or may not experience helps us learn about their behaviours, which in turn helps us become better birders; everyone wins.