Bird Ringing – How and Why 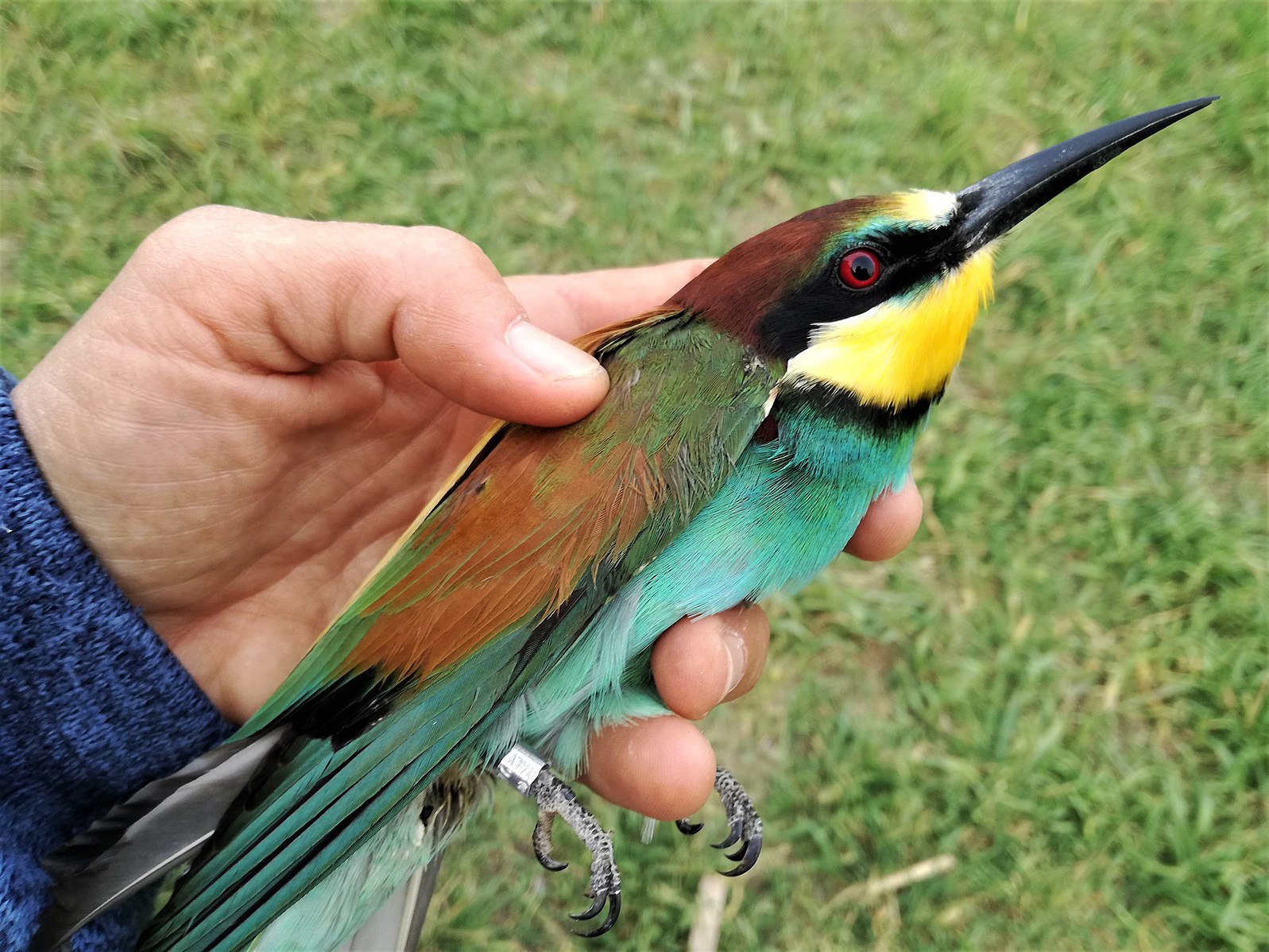 Bird ringing is an essential tool in gathering and understanding information about the world’s species, and can only be performed by someone with a special license. But what can we learn about birds that we don’t already know, and is it possible for you to ever hold a bird this way?

A UK-based friend recently posted some photos online of waders, and stalking through the grass among them was a very clear image of a tall bird, with a long decurved beak, its streaked brown and black back and grey legs showing darkly against the vibrant green grass of spring.

Easily visible around this curlew’s legs were coloured rings: on the left leg a white ring sat above the knee and a blue ring around the ankle, and on the right leg a green ring and a black ring rested one on top of the other above the ankle. I knew these would mean something to somebody, and after a quick Google I suggested that he email the images off to a curlew ringing group I had found.

Knowing that birders tend to talk to one another and word gets around in these sorts of circles, I had confidence that the right person would be contacted eventually. Four hours later I received an email from this friend and the attached trail showed his initial contact and the three successive people it had gone to.

Romans would tie silver threads to the feet of crows.

An email sent at 8.30am had concluded its round trip just after lunchtime, culminating in a positive ID of that specific bird along with thanks from all in the email chain; included in the final email from Devon & Cornwall Wader Ringing Group was a link to the digital history of what we now know is a 4-year-old male curlew called FJ28660, who in the previous 12 months had moved a maximum of 6km between the tidal estuary of the River Exe and the mouth of the river into the English Channel.

Bird ringing or banding (UK former, US latter) of a kind has been around for centuries, but the original purpose was to denote ownership. Evidence has been unearthed that showed during the Punic Wars in 218 -201BC Romans would tie silver threads to the feet of crows who then conveyed messages; each side would know which bird to either shoot or not shoot down.

Later, falconers in the Middle Ages would affix a small metal plate via leather straps to their birds bearing the seal of the court of the relevant king or queen. “Swan marks” were etched into the bills of mute swans who were kept on castle grounds and landed gentry estates to denote just whose swan that was.

Scientists could often track the daily movements of the same individual bird.

Two very rare illustrated volumes compiled in the 1560s still exist today; bound tightly together in leather, vellum pages show row after row of orange and black drawings, elaborate and completely unique tiny marks on every bill. They are in a remarkable condition and 300 years after their creation they were sold to a private collector for £8.80, the equivalent today of around £450 / $200. They were sold again at auction in Christie’s in 1953 for “an undisclosed sum”, indicating they went for a lot more that time around.

The practice of marking birds with paint or ink or wrapping markers around bird legs as a means to track them for information began at the end of the 19th century and took hold officially in the early 1900s, when interest in ecology and the natural world spiked.

‍Zinc rings were chosen but soon discarded and swapped out for the much lighter aluminium. The first official “modern ringing scheme” is credited to Paul Bartsch of the Smithsonian Institution in the United States, who ringed 23 black-crowned night herons in 1902. Seven years later The Ringing Scheme took off in the UK and Scotland, and soon everyone in the world was at it.

Previously thought to spend their winters sleeping at the bottom of ponds, people were stunned to discover that swallows ringed that summer had been reported arriving in Africa in December 1912. How did they know who to tell? The information had been carefully etched onto the tiny metal surface. Migration had already been theorised but now here was proof.

It is this kind of information that is invaluable to scientists, and the decades spent ringing birds since have provided fascinating insights into the literal lengths some birds will go, as well as how long they live, their feeding habits, their breeding habits, and how populations and territories change, and more importantly, why they change.

With this simple idea, scientists could often track the daily movements of the same individual bird over its entire lifespan.

But of course, the information is only useful if it is passed back, so how do they find out all of those things from a single metal ring?

The value of this data is only fully realised when ringed birds are “recovered”, or found, and ring numbers are reported back. That means the information on the ring has to be succinct and legible. Often, members of the public can notify an organisation but sometimes the numbers have eroded or colours have faded, or not read accurately – often birds are far away, and even using a spotting scope can give inaccurate visuals.

Sadly, the most frequent relay of information is when the public find dead birds, or when hunters report back the identities of their kill. Thankfully live birds are also recaptured at intervals, with the use of mist nets, large hair-net like sheets of fine fabric mesh that are strung up between spaces that birds are known or expected to fly through.

The name mist implies that the experience is light and feathery as a bird, and indeed birds are very rarely harmed in the net. All nets are made from black nylon and come with 4 “shelves” to catch the birds when they fly into it. Checked often and only carried out by licensed monitors, casualties are very rare; the only people who can buy and use mist nets have to have the proper documentation.

The original ringing of the bird ideally takes place shortly after it has hatched, if circumstances allow. The potential data available from tracking that chick until the adult meets its end is worth the few moments of stress and discomfort it will go through.

During the ringing process, the birder will weigh and measure the bird, body, beak, and leg length as well as wingspan, and then a small lightweight often coloured ring of plastic or metal inscribed with a unique serial number and contact details will be carefully closed fairly loosely around the leg using a special tool called ringing pliers.

First, the leg circumference is measured with a leg gauge, and then the pliers squeeze the ring closed. The bird is then placed back into the nest or released back into the environment if caught as a juvenile or adult.

The whole process should take no more than a few minutes. During a recapture even less time is spent, as they simply read the number and take the same measurements again.

There are some birds that just aren’t suited to ringing, and can literally make a mess of it. Large birds known as ratites are unsuitable as the cost of making such a ring that would be big enough and secure enough to go round an ostrich’s or flamingos long, strong leg would be too high to be financially viable.

Likewise, birds with short legs like tree kingfishers, or tiny birds like some hummingbirds and warblers, have such narrow legs and toes that anything placed around them and closed so as to not fall off would likely restrict their blood supply and kill them. Some birds also have spurs on the backs of their legs like Indian peafowl, which could potentially interfere with the placement of the ring and cause injury that way.

Then there are the birds who would cause injury to the person doing the ringing – cockatoos have strong, sharp hooked beaks and sometimes a temper to match, and would make short work of a hand; and the ring if it were successfully fitted.

Some organisations also offer the chance to try it yourself.

Some species can be ringed, but they require special shaped rings to fit their unusual leg shape. There are also some unique situations that you wouldn’t normally think of, as with some vultures, who can’t be ringed at all due to their propensity to urinate down their legs, which corrodes the lightweight metal, which then damages the leg.

Many organisations across the world aim to educate the public about their schemes, as they rely on us to feed back their information most of the time. Demonstrations are usually the go-to event, where experts will ring a live bird and talk through the process.

If you ever get the opportunity to see one of these events, we strongly recommend you do not pass it by. Some organisations also offer the chance to try it yourself, which can seem a very daunting prospect, but do not worry as they know what they are doing and will not let you proceed if there is even the slightest sign you may injure the bird accidentally. But there should be nothing to fear; when held a certain way, which the event manager will show you, birds will become docile and immobile.

In the US, you can report any bands you see here Bird Banding Laboratory (usgs.gov) , and in the UK, bird ringing events and reporting is organized by the British Trust for Ornithology. The European Union for Bird Ringing (EURING) gathers ringing data and has a wealth of information if you want to know more, likewise for Australia, New Zealand, and South Africa. Bird ringing in India is coordinated by the Bombay Natural History Society and The National Centre for Bird Conservation (CEMAVE) coordinates bird ringing in Brazil.

So, next time you are trying to ID that bird over there and there’s something not mentioned in the guide about a funny looking thing on the leg, take a closer look, and if you can, take photos and note down where you are and the time.

There will usually be some search result you can find online to report this information back, no matter how vague you think it may be. To someone out there it could be the perfect clue to the bird they have been looking for, waiting to hear of its fate.