How Much Can a Tiny Hummingbird Eat And Do Ostriches Really Bury Their Heads? 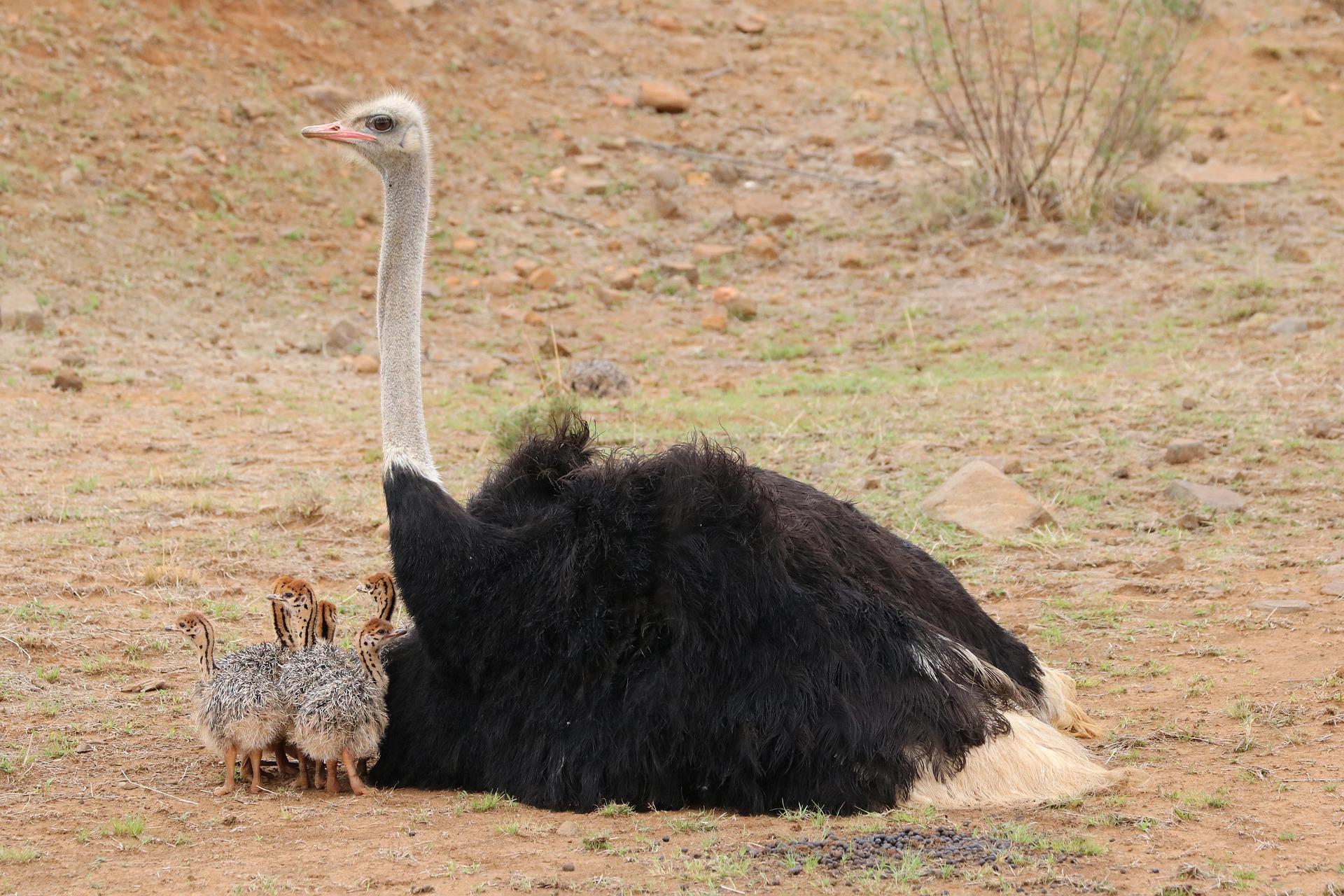 The world of birds has many extremes and today we look at either end of the size scale and find that a bird who can make a nest on a clothes-pin to one that weighs just a bit more than a giant male panda, does have something in common after all.

In 2019, a Facebook page called Nature Gold posted a seemingly amazing photograph of the world’s smallest bird perched on the edge of someone’s finger. Within hours it was shared over 45,000 times and social media users were stunned at the sight of this absolutely tiny bird, maybe no more than 10 millimeters high.

Browsing through the comments, you quickly got the impression that something wasn’t right, if you hadn’t already noticed from the image. For a start, the caption claimed it was a zunzuncito, also known as the bee hummingbird, which is indeed the world’s smallest bird.

Except this “bird” was black, white and gray and had a short bill: even if you don’t know much about hummingbirds you may be aware they are some of the most stunningly coloured birds in the world, and their bills are long and narrow.

But these plumage markings and the stout bill looked familiar to many people, and comments began that this looked more like a chickadee. Just a really small one. Almost: it was in fact a beautifully crafted miniature model of a chickadee made from wire, putty and real feathers by the uniquely talented Bulgarian artist Ina Gancheva, whose page Malinik Miniatures is worth taking a look at (apologies to non-Facebook users) for some fantastically lifelike - but not to scale - bird and other animal pieces.

The artist became aware that her work had been miscaptioned, and soon enough the post came down. For copyright reasons, we can’t show you the image that duped a lot of people, but a quick search will find it for you if you really want to see it.

Don’t get us wrong, these birds are still tiny; there’s a reason they are named after bees. The females weigh around 2.6g and are about 2.4 inches or 6cm long, with the males slightly smaller weighing just under 2g and 2.2inches / 5cm long.

If you have a set of digital scales in your kitchen, neither would probably register. If you live in a part of the world where the hummingbird is “common”, you may be familiar with the ruby-throated or rufous ones – the zunzuncito is half the size of these.

They only live in Cuba, and your best chances of seeing them is to find forests thick with Solandra grandiflora vines and bromeliads, whose large ornamental flowers are perfectly shaped for poking a long thin tongue into.

The smaller a bird is, the more it needs to consume to survive, to keep up with the energy expenditure required for simple functions like breathing, which these guys do at a rate of 250 breaths per minute at rest.

The bee hummingbird must visit around 1,500 flowers and consume at least half its body weight each day. As it feeds, beating its wings at 80 times a second, it collects pollen on its head and long bill which it then transfers to all the other flowers it visits, making it one of the most efficient pollinators in the world, rivaling an actual bee.

The smaller a bird is, the more it needs to consume to survive

Their nests made from cobwebs and pieces of bark and lichen only last long enough for one breeding cycle, and can just about fit in two eggs the size of green peas. Approximately 45 days can pass between egg laying to hatching and finally fledging, so the breeding season is tight, between March and June each year.

The lightest rainfall can render that nest just fragments on the wind before long.

This littlest of birds actually suffers more from habitat loss, like so many of our species, and whilst not yet considered threatened, it is classed as Near Threatened by the IUCN, but it is thankfully illegal to keep it as a pet.

As you can imagine, something this small is not exactly near the top of the food chain, and alas it has many predators, as just about everything else aside from insects is bigger than it.

They are the favorite snacks of spiders, fish, frogs, snakes, and even other birds like orioles and kestrels. But despite the wealth of beasts just around every corner ready to eat it, it can fly remarkably fast at 25-30mph sometimes for 20 hours without a break.

Take a few steps back from peering at the tiniest bird in the world and make room for one of nature’s giants. Don’t let the baby face fool you, this bird is nothing short of a juggernaut. Those long eyelashes are like that to protect the largest eyes of any land vertebrate in the world, all the better to see incoming predators from very far away.

The pale gray and white head and neck look almost bare but are in fact covered in a fine layer of down, but this head and the beak are rather small in comparison to the rest of the body.

And what a body. Festooned in black feathers that are highly sought after in the fashion industry, the huge round body of this bird also packs a lot of meat, whose lean quality is highly prized.

The common ostrich, Struthio camelus, is the largest living species of bird who also lays the largest eggs of any living bird. One of only two species of ostrich alive today, the common ostrich lives out its 40 or so years of life in the deserts of Africa, trotting about in nomadic groups that can be as low as 5 or as high as 50 individuals.

An adult can weigh up to 150kg, but even by one year old they’ll break your digital kitchen scales at around 45kg. Once they’ve reached sexual maturity, they can stand 2-3m tall.

We all know they’re big birds, but there may be something you thought you knew about them that is in fact quite wrong.

One myth is so old (believed to have started in Ancient Rome) it’s a little tricky for historians to figure out where it came from: when confronted with threats or problems, the ostrich does not bury its head in the sand. Never has, never will.

When confronted with a problem, the ostrich does not bury its head in the sand

To the contrary, the first thing this gargantuan bird will probably do is hot-foot it out of there. Being flightless, these birds have developed exceptionally strong legs and feet, and can reach quite a pace.

The fastest land mammal, the cheetah, may be able to manage an impressive max of 130km/h, but it certainly can’t sustain that and loses that momentum after a mere 60 seconds. Using their huge wings as rudders and brakes, an ostrich’s normal running speed is around 34km/h or 55mph, but they can sprint in excess of 70km/h or 43mph for up to 30 minutes. Nothing can out-run an ostrich for long.

The fight-or-flight-response of ostriches may be about-face, but this bird certainly won’t shy away from carrying out the first action if it came to it. All that weight can be put to use by one of those very strong and very long legs, and an adult ostrich can deliver a kick with a force of 140kg per square centimeter, which is more than capable of killing a lion.

Despite all this, the head-burying myth persists, and it is thought that it may have come from observers mistaking the relatively tiny head disappearing into sand when it was in fact just grazing on short grass, or perhaps because ostriches don’t build nests for their eggs but instead dig holes in the sand: during incubation when they are rotating their eggs, they stand above the hole and reach down, using their beaks, so to a lateral observer it may indeed appear that the head has gone below deck. Alas, no-one knows, but we are happy to do our bit to help the ostrich public image if we can.

No matter how great the common ostrich or how small the bee hummingbird, the one thing that unites these creatures is their ability to make the distance between them and their enemies very wide indeed, and quickly. All things wise and wonderful, your speed can save you all.