A Penguin? In Africa? 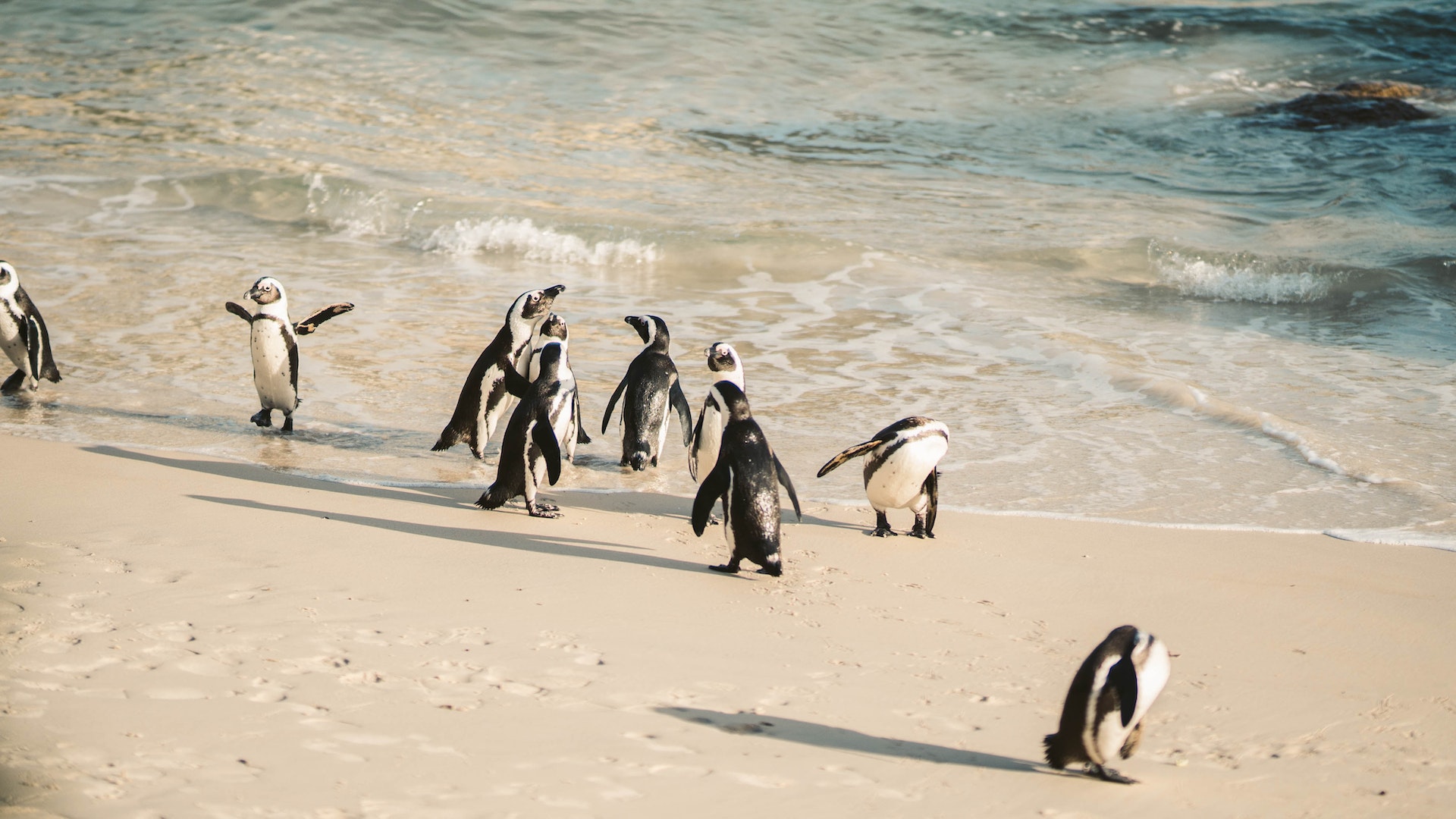 You thought that all penguins were cool, right? Not the African penguin. Yes, that’s right, there are penguins in Africa, and today on International African Penguin Day, we celebrate this robust little bird who is clinging onto survival – for the fourth time – to make the lower reaches of this vast continent their home.

If someone says the word ‘penguin’ to you, what’s the first image that comes to mind? Is it clear and cold blue waters punctuated by ice floes; hundreds of birds huddled together against the sub-zero blasts across the snow-covered landscape? Or sandy beaches, covered in bracken and grasses, black and white bodies waddling about through the warm dunes under a sunlit sky?

The African penguin has a few names, such as Cape penguin, South African penguin, black-footed penguin, a name first given to it by English naturalist George Edwards in 1747, whilst others lovingly refer to it as the jackass penguin.

A species very popular with tourists, this potentially insulting name actually refers to the loud, donkey-like noise it makes, rather than any irritating or infantile antics the birds perform.

A dive in numbers

Sporting distinctive pink patches of skin above the eyes and a black facial mask, the penguin’s bowling-pin shaped body is a swooping blend of black and white, spotted underparts surrounded by a black band.

Their genus name Spheniscus is from Ancient Greek word sphēn which means "wedge", a reference to the thin, wedge-shaped wings turned into flippers: like all penguins, they are flightless.

As with many birds that live off the sea, African penguins are pursuit divers, effortlessly propelling themselves through the waters with their strong, flat flippers and feeding on fish and squid.

The African penguin population used to be in the millions at the turn of the 20th century, but sadly this is no longer the case. Food competition from commercial fishing and native fur seals threatens their existence, and another problem these birds face is that their poop is highly sought after.

There are also other threats such as egg collectors for the black market, oil spills and the ubiquitous loss of habitat.

All of these factors have contributed to their rapid decline, and it is thought there are around 20,000 breeding pairs left, a 95% drop in numbers since the early 20th century population. Classified as endangered by the IUCN in 2010, models predict that if numbers continue to fall at the same rate – and nothing appears to suggest otherwise – they will become extinct in a matter of decades.

This obvious tragedy is made all the more poignant given that these birds have had the odds against them since the beginning of time.

As the name suggests, African penguins are confined to the relatively cooler waters (5-20°C) along the coast of Namibia and South Africa, and it is thought that they arrived around 30 million years ago during the great Continental Drift when Gondwanaland and Australasia and other land masses separated.

But that first time turned out not to be in their favor – paleontologists have discovered the fossil remains of four species of penguin over the past few decades, all thought to have existed at separate times to each other, across millennia.

Once penguins had established populations on the coasts of Antarctica, Australia and South America it is widely accepted in the scientific world that ocean currents have transported wave after wave of penguins to the shores of ancient Africa.

Scientists know that there are two ocean currents in the South Atlantic that could have swept penguins from South America to the African coast. The current ocean system we have today is thought to have established itself around 20 million years ago, and this directional flow also explains why penguins didn’t spread further north along the coast of Africa, never reaching Madagascar.

Whatever it was that wiped out the first tranche did the same to the next – and then the next, two more times. Theories abound, but one that holds water also points to the loss of it – sea levels have dropped over time.

This means that what were once rocky outcrops and islands within lagoons, perfect for nesting sites away from land-based predators, have eventually been exposed down to the bedrock and become connected to the mainland.

To live in such a warm environment has led to specific adaptations. Most penguin species lay their eggs out in the open, but African penguins dig burrows to protect their eggs from the sun’s heat.

These chicks will hide in the shadows of the burrows for around three weeks, eventually braving the outside world, one full of predators. On land, there are leopards, mongooses, and dogs and cats, and in the sea, they come face to flipper with sharks, fur seals, and orcas.

It is an exceptionally tough life being the latest - and last - round of African Penguin.

Every second Sunday of October, conservation groups highlight their plight on International African Penguin Awareness Day. Organized in part by the Southern African Foundation for the Conservation of Coastal Birds, the aim is to make people aware of all the things they can do in their everyday lives that many simply don’t suspect has an impact on these tenacious birds, thousands of miles away at the bottom of the world’s second largest continent.

One of the most effective ways we can help any species is to shop responsibly and avoid single-use plastics where we can.

If you love seafood, check out the Southern African Sustainable Seafood Initiative’s website here, where you can find a “green list” of alternatives.

Read about the penguins, learn about their life cycles, and encourage others to do the same. By spreading awareness of the issues that affect this and thousands of other bird species across the world, we can all help. You’ll soon find that problems like overfishing and habitat loss are linked, but so too are the solutions.

Aside from the fact that these penguins have had four goes at finding a home on the African shores, we should do all we can to help them anyway, because there isn’t going to be a fifth time.

Once those penguins are gone, they’re gone, and that braying jackass call will be heard no more.