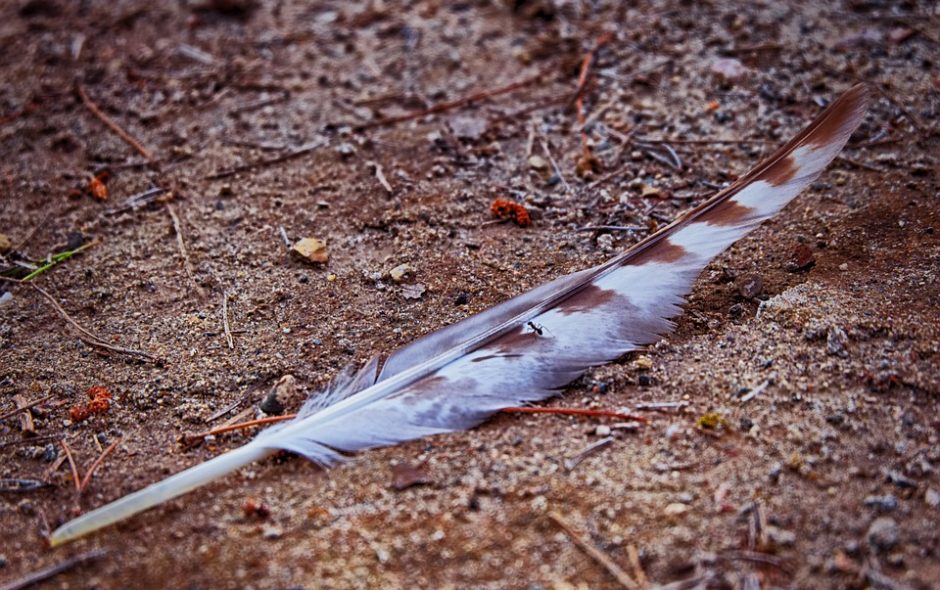 Have you seen feathers on the ground and thought there had been a fight? That may have happened, but it’s more likely a bird is going through a process called a moult, when it loses old feathers and gets shiny new ones. Why do birds do this, and does it leave them vulnerable?

To understand why a bird goes through the process of a moult, we first need to understand what a feather is. There are many different forms a feather can take but they will all have the same basic structure – a central vane known as a rachis, fronds coming off to the side of the rachis called barbs, and the hollow barb-less base where the feather is anchored to the skin, called the calamus.

Depending on the type of feather, there may be more filament-like branches coming from the barbs called barbules, and some of these may have tiny hooks on the end that will interlock and hold a certain shape, as with the flight feathers of owls that break up air turbulence, creating silent flight.

these final structures are essentially “dead” and stop growing

There are seven broad categories of feathers on most birds: wing, tail, contour (overlapping feathers that give the bird its shape), semiplume (usually hidden beneath outer feathers and providing insulation), down (similar to semiplumes but lacking a distinct central rachis, and much smaller), filoplume, (that function like whiskers on a cat) and finally bristles (the simplest form of feather and usually only found on the head).

Each category has specific functions, and some will have multiple parts to play – weatherproofing, camouflage, display during courtship, and so on.

All feathers are made of a protein called keratin, the same as our nails and hair. The skin of birds is covered in tiny mounds called papillae which are the outer structures of follicles.

Keratin is laid down in microscopic layers and eventually builds up to form the calamus, the origin point that then extends to become the rachis, pushing out through each papilla.

At this point the rachis contains a vein and an artery, nourishing the development of the feather. These blood feathers are protected by a harder sheath as they grow. After some time during which the barbs and barbules grow safely enclosed in the sheath, the blood vessels will eventually recede, leaving the hollow calamus and rachis, and that waxy outer sheath will fall or be pulled off by the bird.

The moist feather within will then unfurl and dry out to its final shape. Depending on the DNA of the bird, there will also be tiny pouches at the base of some feathers secreting melanin or pigments from the bird’s food into the hollow calamus which will spread up into the barbs as per any genetic “instruction”, and give the feather colouring, or plumage.

Without the nourishing blood supply, these final structures are essentially “dead” and stop growing, unlike our hair and nails, so they will need care and attention as they experience whatever the outside world has to throw at them. Constant rubbing against tree branches, storms, taking dust baths, even the very act of preening will create friction and lead to erosion of this keratin.

moults have a sense of symmetry and timing about them

Special glands within a bird’s skin secrete oils and even antibacterial substances, which a bird applies to the feathers as they preen, helping them stay in a good condition. Preening isn’t just washing; it will also involve delicate and precise relocation of any barb or barbule or hook out of place.

As every single feather works with every single other feather, the birds need to ensure none are out of alignment, as then it can’t fly properly, or it won’t be able to keep warm enough. As the feathers age, they will lose their ability to perform the sole function needed of them, and will need to be replaced. This is where moulting comes in.

Some young birds go through something called a partial moult – European robins do this for example. Juvenile robins will fledge after about two or three weeks in the nest, meaning they will leave the nest and eventually learn to fly and find food for themselves independently.

This can take a few days of being on the ground, and at this point people often mistake these fledglings for chicks fallen from the nest, and try to help them, but they must be left alone (unless injured – read more about what to do if you find a bird on the ground here).

They will still look quite young, having a dappled back, breast and head, but this plumage is designed to help it blend in with its surroundings while it is vulnerable on the ground, and also avoid any territorial disputes with adults nearby.

After three or four months, these fluffier and mottled feathers will gradually be replaced by the more typical orange to red breast and brown back of an adult, but the wing feathers stay the same, and will only be replaced at the time of the first full moult, about a year later.

The actual process of moulting begins with the feather’s calamus loosening in the follicle, eventually falling free, or sometimes pulled out by the bird. Because this loss will affect the bird in several ways, moults have a sense of symmetry and timing about them – the wing feathers may moult first, then the back and the head, then the tail and so on.

‍Enough feathers have to be kept during this process so that the bird can stay warm and waterproof. Feathers close to the moulting site can help protect any exposed skin, but birds generally tend to look quite dishevelled during this process.

‍Behind the loosened calamus a new feather will have already been growing, known as a pin feather, and once the old feather falls out, this new feather can take anything from a few hours to several weeks to come through.

Again, depending on the species and location of the original feather, an entire moult cycle i.e. full replacement of all feathers on one bird can take months. Ducks can go through an entire moult in 2 weeks, but pelicans can take 2 years.

Some birds change their colours completely as the breeding season approaches

Aside from a general moult to replace damaged or worn feathers, many birds go through specific moult cycles.

A bird is considered an adult once it moulted all of its juvenile feathers, and of course this will depend entirely on the species; our robin friend will experience its first full moult a year later, but some seabirds and raptors take a few years and several moults to shed their sub-adult plumage and finally show off their full adult colours.

Breeding season usually brings with it two types of moult – before and after.Some birds change their colours completely as the breeding season approaches, as their species dictates that an elaborate and showy courtship display has to take place before they can successfully breed.

The black-tailed godwit, for example, has a mostly white and buff pale chest with a grey to brown back during the winter, but come the summer months these feathers are entirely replaced with a resplendent burnt coppery and rusty red / orange neck and chest, with richer browns and blacks coming through on the back, as well as several black bars running along the flanks.

Being aware of the moult process can be very useful for us to not only correctly identify a bird, but also understand when a bird is young and learning the world, approaching or coming out of the breeding season, or preparing for migration, as moulting uses a lot of energy.

This feather change won’t take place during the actual breeding season, nor when migration occurs, as they need all the energy they can get for those strenuous activities.

‍ The moult process is usually a very dangerous time for all birds; losing wing feathers, for instance, means birds need to be safe and have enough access to food to survive. You can help with any of your garden birds that are moulting by making sure they have enough food nearby, and going easy on the pruning or trimming of any bushes or trees you have.

Birders often report sudden disappearances of birds at certain times of the year, and this could well be the reason why; if a bird knows it has a safe habitat to stay close to, you may get the chance to observe a bird at its most vulnerable and helping it through it at the same time.