The World of Parrots 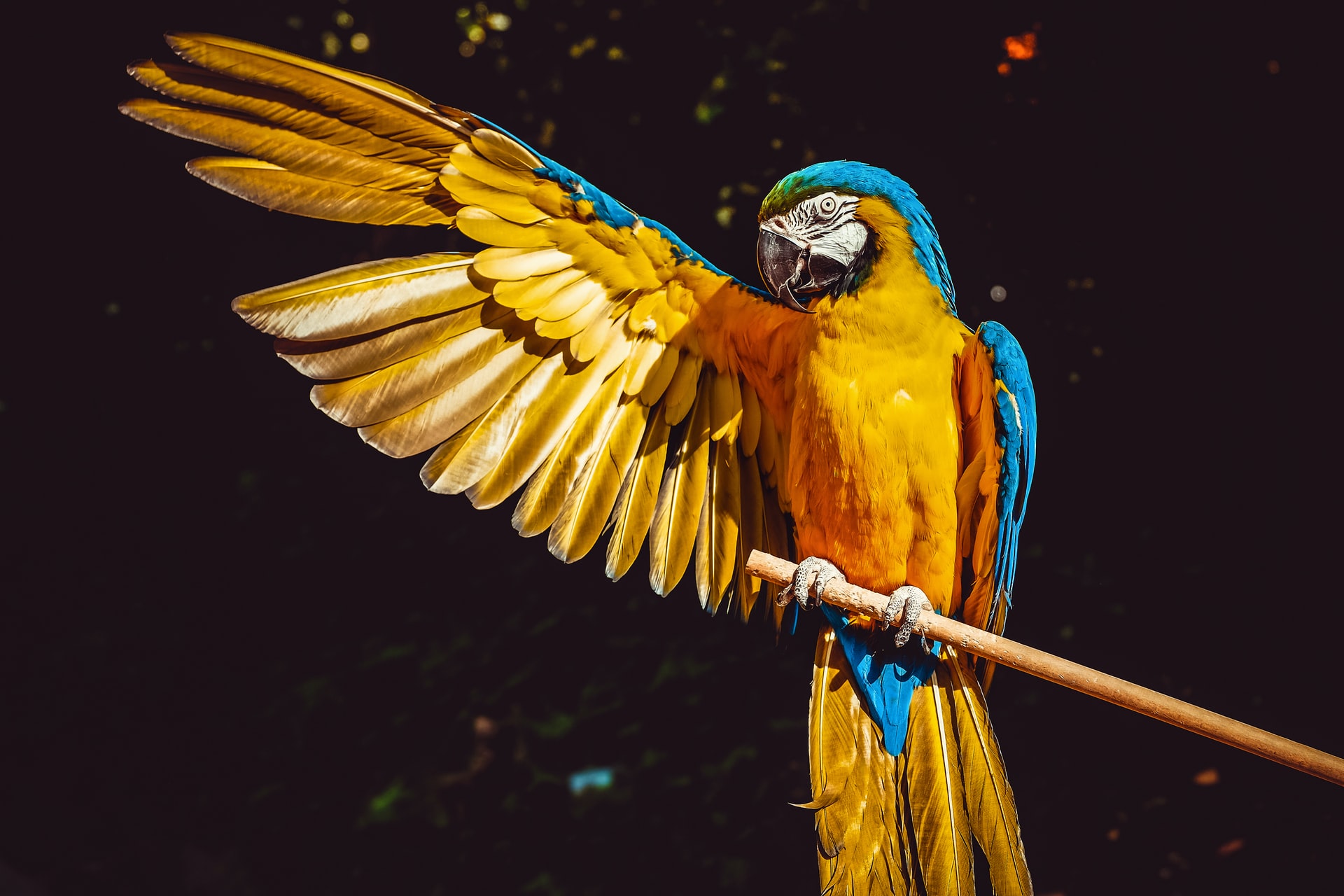 Once upon a time, the image of a parrot was inextricably linked to perching on the shoulder of a man with one wooden leg, a black eye-patch, and a penchant for chewing on gold coins. Nowadays, parrots are more associated with America’s most favorite bird pet than pirates. Their popularity is not surprising, as parrots are charming, intelligent, beautifully feathered, and absolutely fascinating.

Comprising over 398 species across both Old and New World locations, parrots in the wild are currently experiencing, along with much of the natural world, a creeping catastrophe. Just over a quarter of species are currently classed as critically endangered (18), endangered (39), and vulnerable (55), and this is mostly due to commercial agriculture through deforestation.

Seventy per cent of all parrot species are forest-dependent, relying on them for food and nesting sites. Add in the illegal pet trade and the arrival of invasive species on numerous island habitats where parrots are endemic, and you have a global problem.

But today’s article is less about the challenges they face, although that is ultimately what we should all be focussing on, but on this World Parrot Day (May 31st), let’s look at what makes these guys so impressive and alluring.

Old parrots to the New Worlds

Believed to have evolved in Gondwana around 70 million years ago making the one of the world’s oldest bird orders, parrot populations now exist on all tropical and subtropical continents and regions including Australia and Oceania, South and Southeast Asia, Central and South America, and Africa.

Several parrot species live in temperate regions of South America and New Zealand, and many have established stable populations in parts of the United States, the United Kingdom, and Europe after introduction there, either on purpose or as a result of escaped exotic pets.

The only parrot to inhabit alpine climates is the Kea on New Zealand's South Island. Its cousin, the absolutely adorable kakapo, is the world’s only flightless parrot, and is now under close supervision at island sanctuaries in New Zealand, where conservationists are doing what they can to boost their numbers, currently at around 250 individuals left in the world.

Despite having huge variations in habitat, plumage and size, all parrots share common traits.

Parrot plumages are famed for displaying more colors in the world than featured on one young man’s Dreamcoat, and remarkably, unlike other birds who rely on their diet and light for their feather coloration, parrots are the only known birds capable of producing their own feather pigments. These pigments are called psittacofulvins, and they also appear to act as a defense system against bacteria: a 2011 study found that after exposure to a known feather-degrading bacteria, parrot feathers did not suffer.

All parrots are zygodactyls, which means they all have four toes on each foot with two pointing forward and two backwards. These toes are very strong with elongated sharp claws at the ends, and parrots use their feet a LOT.

They are very dextrous, and aside from climbing and swinging, they use their feet much the same way we use our hands, like prising open husks and fruit skins for food, and they also exhibit a preference for one foot or the other, i.e., they can be left or right-footed.

All parrot species have a strong, curved, broad bill, much like some other birds, but where parrots differ is that the upper mandible is not fused to the skull, but instead attached by ligaments and muscle.

This means parrots can move it in pretty much every direction they need, providing tremendous biting pressure.

As an example, some macaws have the equivalent bite force of a large dog. All parrots eat fruit, vegetables, seeds and nuts, and seed-eating parrots also have a strong tongue which they use to maneuver seeds or nuts between the sharp edges of their bills to apply that cracking force.

A recent study also showed that parrots use three limbs when climbing – their exceptionally versatile feet, and their bill.

Parrot eyes are positioned high and laterally in the skull, giving parrots a visual field unlike any other bird: they can see from just below the bill tip, all above the head, and quite far behind its head, all without moving. Parrots can also see ultraviolet light, because, why wouldn’t they?

The Voice and Brain

Parrots are exceptional mimics, something which makes them so attractive as pets. Many species can mimic a range of non-avian noises, including human speech, which is all the more impressive given the fact they don’t have any vocal cords, but instead expel air across the trachea opening, like blowing a note over an open beer bottle. Only better.

Along with corvids such as ravens, Caledonian crows and magpies, parrots are considered one of the world’s most intelligent birds. Being highly sociable or gregarious birds, parrots indulge in early learning, forming crèches and practicing foraging behavior in groups supervised by older adults.

They have been seen to engage in mock fighting and practicing evasive action techniques, and some species like the kea use tools to solve puzzles.

African gray parrots, most famously a parrot called Alex, have demonstrated not only the capacity to speak our language but to associate the correct meaning to the words. In 1995, a blue parakeet called Puck entered the Guinness Book of World Records for his vocabulary skills, with a recognized set of 1,728 words.

The largest flying parrot in the world is the stunning hyacinth macaw , an entirely blue parrot measuring one meter from the tip of its tail to the top of its head. The aforementioned kakapo is perhaps the world’s heaviest parrot at an average of 3.5 kg.

The Buff-faced Pygmy parrot is a tiny bright green bird, weighing around 12 g and standing at a height of 8.5 cm, making it the world’s smallest parrot in the wild.

They Love Mirrors, Don't They?

Parrots are fascinated by reflective surfaces and the sight of a parrot pecking at a mirror and calling out “Who’s a pretty boy then” has been the comedy staple of pet parrot behavior for decades. However, recent studies have thrown doubt over the fun aspect of this.

Reasoning that all parrots lack the cognitive abilities to actually recognise their own reflection, researchers have concluded that presenting a parrot with a mirror may be harming its mental health.

When a parrot sees another of its kind, they often perform specific social rituals like singing, chirping and dancing, waiting for responsive body language to indicate an interaction. When this is not forthcoming, the end result appears to be a confused and very lonely pretty boy.

‍Behavioral problems have been observed in test subjects: when the “other” parrot doesn’t interact appropriately, the actual parrot becomes offended, frustrated, aggressive, and depressed.

Some test subjects have even been seen to become obsessed with the mirror, refusing to leave it for hours on end, whilst engaging in self-harming antics like feather tearing and plucking. It would seem it is best to leave the mirrors to the humans and chimps.

Wild parrot habitats are under threat, however, and if we want to continue to be enthralled by these charming birds, we must join others in celebrating their beauty and diversity through effective conservation action.

If you want to know more about how you can help, this is an excellent resource bringing together most of the currently active parrot conservation projects around the world. ‍