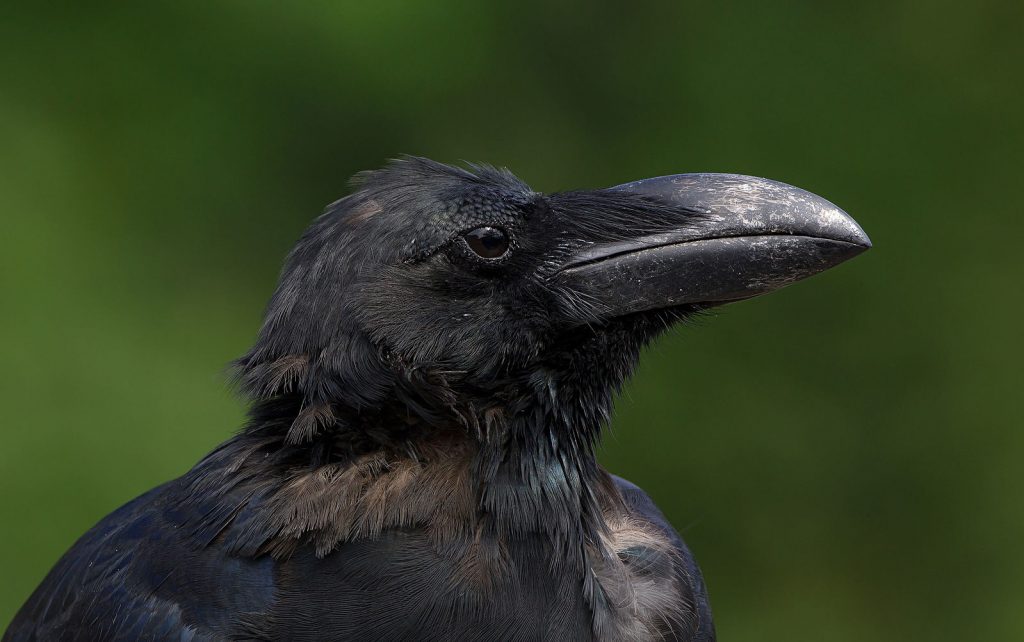 Type the words “crow intelligent” into a search engine and you will find many articles or stories on how crows are some of the cleverest birds out there. Corvids rate the highest on tests of animal intelligence, higher than apes, and here look at just a few of those remarkable findings.

The Corvidae family includes many birds with names other than crow: magpies, jays, jackdaws, ravens, rooks, choughs, nutcrackers; the English common name for all of these birds is crow, which can be a bit confusing when we are talking about the hooded crow or carrion crow.

Not all of the 120 species within that family can claim genius, however, but research is relatively fresh and ongoing. So far, 40 species have consistently displayed mind-blowing characteristics of planning, problem-solving, and memory during experiments.

A widely accepted truth among scientists today is that animals have levels of intelligence like us, but language separates us and that limits much of further progress.

Since the beginning of recorded history there have been tales of animal smarts, in every culture you can name, but around the middle of the 19th century as science was making leaps and bounds in all directions, the notion that animals are instinctual “machines” simply reacting to stimuli to get through their day was the approach to any study, and it is thought this dismissive angle originated from the moment Charles Darwin’s protégé Georges Romanes coined the word “anthropomorphism” – the bestowal of human qualities on animals.

For example, he wrote that a rat released from a cage was now happy and carefree. He also remarked that monkeys who had sustained superficial injuries during attempts to hunt them would taunt the failed slaughterers by showing the men their bloodied paws, effectively saying “ha-ha you missed”.

This idea that animals could experience moods and judgement did not sit well at all with learned men. Romanes relied heavily on anecdotes for his research which became hugely popular with the public, but added fuel to the scientist’s indignant fire, for what does the public know…

After his publication of Animal Intelligence in 1881, the scientific world united in derision, and the great divide of empirical research and old wives’ tales grew wider. Animals were not, and could not, be clever: only humans are clever.

Fast forward to the latter half of the 20th century and learned people of science were finally being more open about their suspicions based on their methodical observations. In the next 50 years, there would be an explosion of lab research dedicated to the sole purpose of understanding animal cognition.

Animals were not, and could not, be clever: only humans are clever.

Initially, the research focused on large-brained animals like primates and cetaceans, working from the flawed theory that big brains meant big thoughts, but gradually attention turned to other animals like birds, bees, fish, ants and so on. Time and time again, one type of bird consistently shone through as the winner.

Betty and the New Caledonians

In 2002, a group of scientists at Oxford University, UK watched in anticipation as a New Caledonian crow called Betty peered at a thin plastic tube containing a morsel of meat.

She then walked over to various items left nearby, and selected a piece of wire. Using another object as a fulcrum, she bent the wire at one end, and produced a hooked tool. Betty then walked back to the tube and poked the hook into the opening, which fitted perfectly, and fished out the meat. Innovation, tick.

‍The researchers were stunned and thought they must have some kind of crow genius on their hands. Not so long after, however, research showed that in the wild, New Caledonian crows do this all the time using twigs and branches to extricate grubs and insects from inside trees. Betty’s invention was simply an expression of her nature.

Further experiments showed that these crows would seek out a specific type of plant stem to make their hooked tools, but would find the stems they wanted even when they had been disguised with leaves from a different plant species. This suggested that the birds were selecting a material for their tools that they knew was just right for the job. Awareness, tick.

Another crow went even further than using a single tool to get his food. 007 was familiar with a series of implements already, but in this test, he was presented with a set of eight different puzzles that contained each of those tools.

The researchers were stunned and thought they must have some kind of crow genius on their hands.

Small stones were openly available to him at the start, and only one of the puzzles before him could be solved using a stone to release the next tool, which would then solve the next puzzle, eventually obtaining the tool that would release his food.

Initially, he tried to use stones in the same wrong puzzle twice, but after what appears to be a few seconds of scrutiny, 007 then dropped the stone into the right puzzle and then systematically solved each one with no further failures. Trial and error, problem-solving, tick.

Being gregarious, crows live in communities and are now known to swap information endlessly. In the late 1980s an ornithologist at Cornell University realised little was known about crows, which was odd, given that there were so many of them.

Language is said to be what makes us human.

He had noticed a couple in his neighbourhood opening plastic rubbish bags; by the end of the week there were around 20 crows at it. Locating the nest of one, he placed a white band around the leg of a chick and over time tried to track its movements and interactions.

Needing more data, Kevin McGowan and his team eventually banded 3,000 crows, and now have years of data on their lives. During the research he had the opportunity to listen to them on a regular basis, and started to detect common calls and barks, and interestingly, tones.

Some of these were hard to differentiate, similar to an English language ear listening to the tonal dialects of Vietnamese, but the tones were there nonetheless.

Language is said to be what makes us human. Linguistically, crows may not meet all the conditions – as far as we know they don’t rearrange the order of their calls to create new meanings; but they certainly have a system of communication, otherwise known as language. Facts like these challenge assumptions about our uniqueness.

All in the mind

Another study from 2020 carried out in Germany, revealed that crows analyse the content of their own brains; in other words, they know what they know.

Neurobiologist Andreas Nieder trained two crows, Glenn and Ozzy, to peck at red or blue targets whenever they saw a dim light, and the “rule” as to whether the birds saw the light was varied (peck red means I saw it, blue means I didn’t, or vice versa).

‍During the rule changes, there would be a couple of seconds delay before either bird pecked a colour, and neuron activity was tracked throughout. Whenever the birds “reported” seeing the light, sensory neurons were active, but they remained silent when they pecked no, I didn’t see anything.

Glenn and Ozzy’s brain activity systematically changed depending on whether or not they reported yes. This meant that the birds had sensory awareness: in the delay, they were considering the information they already had against new information. Until this point, neurobiological evidence for sensory awareness only existed in humans and macaque monkeys.

Knowing what you know is a form of consciousness; the discovery that animals seem to have this raises some hard questions about how we treat them. Perhaps this is a dilemma the united scientists feared to face all those years ago: an unspoken pact to deride the belief of animal intelligence absolved them of any potential guilt, and ignoring a brain behind the beak was simply easier.

But evidence continues to mount that shows us the collective noun for our dark feathered friends may not be quite so apt: a murder is a debased, senseless act. Maybe a cleverness of crows is more deserved.