Back to tales
Bird feeding
,

Should I Feed the Birds All Year? 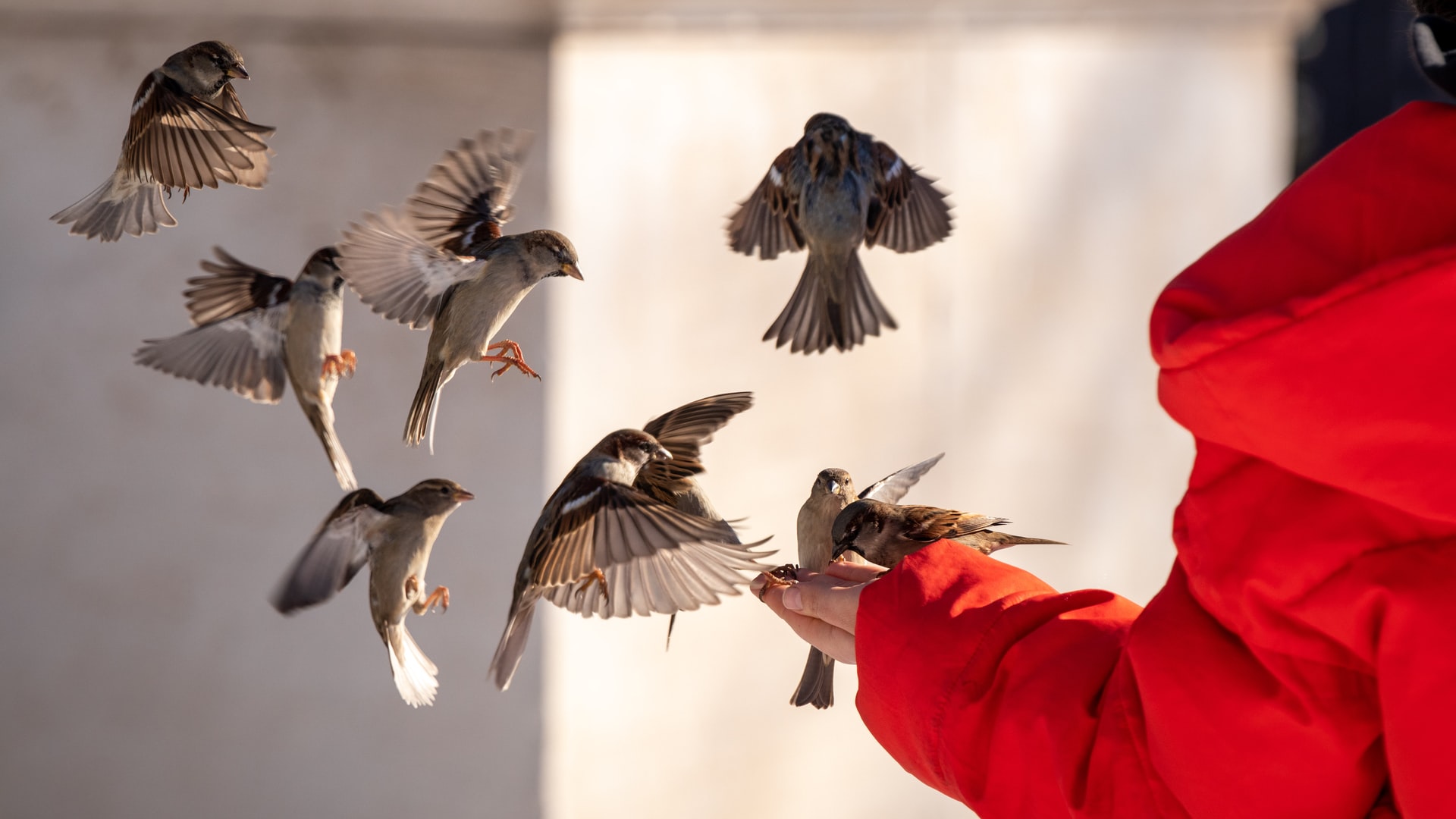 In the northern hemisphere, spring has finally arrived, and as the air soon fills with insects, the smell of blossoms, and budding promises of grapes, apples, sunflower seeds and corn, some of us ask: do we still feed the birds?

Feeding birds during winter is of course the right thing to do, but what about the rest of the year?

Since the turn of the 20th century, people have put out food for the birds on a widespread basis. This activity was implored in newspapers in the UK at the end of 1890, as the nation suffered one of its worst winters on record. Birds had been thrust into the public eye the year before due to the persistent and effective campaigning of influential socialite women, highlighting the horrific numbers of birds slaughtered to fuel the feathered hat and fur trade (and thus creating the RSPB in the process). This awareness couldn’t have come at a better time, given the -17°C temperatures endured for two months the following year.

The public felt compelled either morally or fashionably to right some wrongs, responding to the call to Feed the Birds with admirable gusto. Americans were also pursuing their own avian enlightenment, and bird food and feeder sales skyrocketed during the early 1900s, and have been a multi-billion pound / dollar industry ever since.

‍Feeding birds during winter is of course the right thing to do, but what about the rest of the year? For quite some time there has been the clinging sense that once the weather warms up, we can take down the tubes, scrub off the suet, and store away the stands until 9 months hence. This view is supported by a few arguments, and contradicted by others, so we now take a look at those.

I was born to fly away

In a previous post we addressed the myth feeding the birds will deter them from migration, as why leave when there is food right here. This not only completely ignores the residentbirds, it also overlooks the complexities of genetic programming, where studies since the 1950s have shown that you can’t stop that from happening by leaving a few seeds out. Migration is triggered not only by some innate conviction to just go, but by changes in weather, temperatures, and yes, food sources.

‍Resource provisioning, that is, humans leaving food out, accounts for around 25% of the food consumed by wild birds, and most of their day is spent foraging like wild things do. Birds have never been prevented from doing what they’ve got to do even if that means flying thousands of miles, no matter how foolhardy that seems to us. Until, it seems, recently.

In 2015 a team of academics carried out a meta-analysis, a study of studies, to see how intentional feeding and accidental feeding (agriculture, household waste, landfills) affected certain wild animal populations. Of the 20 studies they scrutinised, only a few involved birds, and one showed that white storks in Spain had chosen to remain at their breeding grounds instead of heading south to Africa for the winter.

However, it must be noted that their breeding grounds are now bordered by urban landfills, unwanted human materials and organic waste, a veritable treasure trove of discarded food.

Combine this abundance of meals at any time with an upward shift in temperatures as evidenced over recent years, and you have an albeit very generalised shift in behaviours. Of course, the difference between sprawling landfill and a platform feeder here or there is a universe apart, but this does show that this once dismissed suggestion can hold water given the extreme set of circumstances as above.

This epic change that the storks have adopted will require greater study, but should not then be extrapolated to mean we can’t feed the birds anymore; millions of birds continue to make those journeys twice a year no matter how tempting your mealworms are.

Bird numbers of most species are on the wane: there are successes, but overall, it is sadly safe to say that populations are declining at a scary rate. Much of this is linked to food, as access to land where the food is has been removed, wholesale.

Some experts believe that feeding birds can affect bird populations negatively, in that you will boost numbers of more dominant species thus putting survival pressure on less populous species, and whilst this does seem logical, it has never once been shown to occur within urban environments, where most of us will be feeding the birds.

Heading into the breeding season, birds need to stock up.

Something all people who feed birds need to be aware of is disease. Crippling highly transmissible diseases such as mycoplasmal conjunctivitis, trichomoniasis and salmonella can tear through a bird population in days.

At the beginning of the year an appeal was issued by the British Columbia, Canada, branch of the Society for the Prevention of Cruelty to Animals (SPCA) asking people to withdraw their feeders temporarily to help curb an outbreak of salmonella that was decimating the local finch population, particularly pine siskins.

These diseases are so easily spread at feeders because many birds will congregate there, and this proximity makes it very easy for the pathogens to leap bird to bird. The responsibility of keeping your feeders clean should never be underestimated and if you can, space out feeders to give birds room.

‍Although winter feeding is when birds need it the most in terms of food shortages and really cold temperatures to get through everynight, lack of food can happen at any time of the year. Surviving a food shortage is one of the starkest things a bird can go through, as they burn their energy very quickly and need to replenish constantly. As some birds have several broods a year, any lapse in food for even a short time can be disastrous for chicks. A few days of summer storms or weeks of drought can spell the end for many.

The benefits of feeding birds throughout the year are manifold, and can vastly outweigh any negative effects, if done right. To understand why it is a good thing to leave food out for birds all the time, we need to look at what they are doing.

A new year, a new shell

Despite the days getting warmer and longer in spring, nights arestill chilly, and daylight hours are still that little bit this side of rubbish for long foraging. Heading into the breedingseason, birds need to stock up on some essentials to be in peak condition for bringing forth new birds.

Any cached seeds or fruits from autumn are now long gone, and females need calcium and protein as they prepare to lay eggs. If you can find it, oyster shell grit is packed with calcium and other minerals and very helpful for eggshell generation, and also helps birds grind up food in their gizzards.

Birds undergo moulting at least twice a year, usually before and after breeding, shedding weather or flight damagedfeathers or to adopt their breeding or winter plumage. Feathers are made of keratin, therefore protein-rich foods are high on the menu when this happens. Black sunflower seeds, any sunflower seed hearts, mealworms, raisins, currants and grated mild hard cheeses are good for this.

Peanuts, which have a good amount of protein but are also high in fats and use a lot of energy to eat, and high carb foods like bread, arebest avoided as these may get passed to chicks, who not only may choke on large chunks but also need protein too. Birds time their breeding to coincide with when there should be lots of food around, like earthworms and flying insects, but any changeable weather can lay those plans to waste. Have you ever tried pulling a worm from the dry hard ground? If you can stomach it, live mealworms are just the bee’s knees for many birds, as they hydrate as well as nourish, especially helpful for young chicks in a hot nest unable to find water for themselves.

Once the migrants have left, don’t forget about the residents.

In the summer it’s hard to know just what you’ll get – unbroken dreary rain for what seems like forever or long and dreamy sun-bathed days. Fruits, worms and insects should be in abundance at this time of year and you may well find that otherwise frequent visitors have slacked off and are nowhere to be seen, except perhaps high overhead in the blue or in the distant haze over fields hopping with six- or eight-legged beasties.

However, this is no excuse to shirk your back-up duties. Adult birds will hopefully be heavily involved with raising their young, a challenging time for anyone. Again, lay off the larger and fattier foods like peanuts but seeds including those all-important calorie-packedsunflowers are perfect. Avoid anything suet-based or similar – warm weather will reduce those hard shapes to mush in no time and draw out the larger, more toothy dwellers of your environment, animals we’d rather weren’t around when young birds could still be earth-bound.

Cut back the amounts you put out: a quarter of the food normally left out in winter would be enough. If it goes untouched, bring it in for a few days but keep an eye on the weather. Birds are more aware of storms approaching than we will ever be. Foraging activity will increase before one, as who knows how long it will last.

Heading into autumn, if the summer has been good and juveniles are plumping up nicely, then you can think about leaving nature to do its thing for a while as there should be plentiful nuts and berries come August and September. But if it’s been a particularly damp or arid season then migrating birds will be thankful for the extra resources for the arduous journey ahead of them. Now you can start to leave out all manner of nuts alongside your seeds as migratory birds need to store fat, and a lot of it. The resident birds will also be thankful if the choice is there.

‍Once the migrants have left, don’t forget about the residents. They may not have the urge to fatten up as much as the just-departed, but don’t be disheartened as they will return, and around October you can start to leave more and more food out to help them familiarise with feeder locations for the cold winter ahead.

Back to those diseases – prevention is always better than cure and simply put, you must clean your feeders. No matter the materials used or how well thought-out the design of a feeder, bird food morsels, seed hulls, kernels, corn – it can get wedged in the trickiest of places and moulds grow quickly under the right conditions. Research has shown that proximity to landfill or environments where human generated waste is prevalent has reduced  the immunity thresholds of many birds, so your good quality feed can actually help boost this in others, but once the affliction takes hold, no matter where they got it from, the only thing you can do is physically remove your feeders or at the very least keep them as clean as you can.

‍We feed the birds because we want to help them, and that involves taking every step necessary.