The Life Cycle of Birds 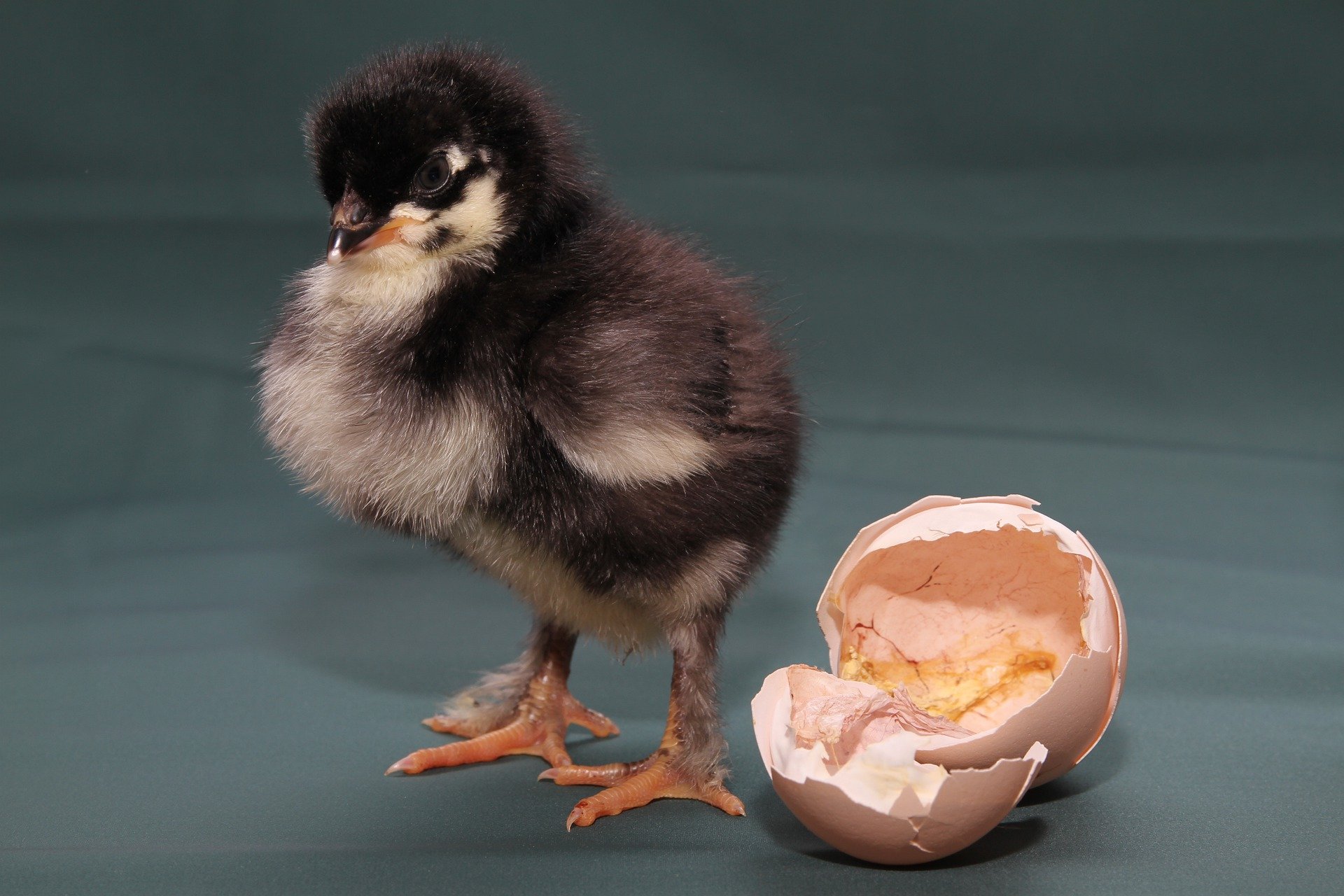 Most of us will only ever see a bird as a “finished product”, the adult; some may get the wonderful chance to see a fledgling in its first plumage and watch it learn how to be a bird with its parents. But how does a tiny blind naked chick become a fully feathered watchful aeronaut?

‍Not so long ago, a relatively mild-mannered internet argument unravelled on a chat site about how not all birds come from eggs.

The original remark was finally revealed to be a trick statement: “Peacocks don’t lay eggs”, they had quipped, throwing their opener into the ether and kicking back to watch the flames climb higher.

Eventually someone pointed out what many were overlooking in their misplaced rage – a peacock is the male of the species of bird called a peafowl. Peahens lay the eggs.

Unlike other animals,bird embryos grow outside of the parent in an egg.

But during the course of this somewhat pointless and cheeky debate people genuinely started to doubt their schooling, their knowledge of the world around them and the very fabric of truth itself. The dynamics and some “conclusions” of the debate are for the scrutiny of some other field of science, but for the purposes of this post, we can categorically confirm, all birds come from eggs.

Unlike other animals, bird embryos grow outside of the parent in an egg. Female birds produce a single egg cell as a result of hormonal changes; the egg leaves the ovary and journeys down the oviduct, exponentially dividing as it moves, and if sperm are present in the oviduct then it is fertilised.

‍A yolk forms, which will serve as food for a fertilised embryo, upon which the divided cells gather in a tight white spot called the blastoderm or embryonic disc.

The journey down the oviduct continues whether the cells have been fertilised or not. Membranes and the albumin (egg white) are laid down, and this mass is then hydrated and takes on the plump ovoid shape we are all familiar with.

Every stage of a new bird’s life renders it very vulnerable.

At this point, calcified minerals are deposited in layers onto the external membrane and eventually the shell forms in varying thicknesses around the egg white. Once the shell is thick enough, it passes from the female cloaca and into the welcoming embrace of a nest.

Eggs that have been fertilised will now contain an embryo that will grow over the course of the next few weeks, depending on the species. Inside the egg shell, the embryo will be nourished by the yolk and once lungs have formed, parts of the membrane will dry out and detach from the inner shell, and air will fill this new pocket of space.

An egg tooth will have formed at the tip of the new soft beak that will eventually pierce this pocket, known as internal pipping, and the bird takes its first breath. Feather follicles have also been developing, and tiny shards of down feathers are beginning to protrude from their protective sheaths.

The parent bird on the outside will need to keep this egg warm, a process known as incubation, to promote all this frenzied growth in these vital days. Eggs need to be moved around and rolled to ensure uniform warmth, and this rolling movement also ensures that the membranes don’t stick to the inside of the shell.

Some chicks can be heard peeping from inside the egg, and it has been discovered that goslings will alert their goose parent with a specific alarm call if they have been turned upside down and unable to reach up to chip at the egg shell.

Incubation periods vary greatly across species, of course: many songbirds and hummingbirds are around 9 – 14 days, larger birds like raptors can be around 35 days, penguins take longer at about 65 days, and Wandering albatrosses have been known to take 85 days to hatch.

When it is time to hatch, the bird uses its egg tooth again and breaks through the outer layers; this is called external pipping. Breaking free of the egg is exhausting and the chick will lie still for a few hours as it recovers and dries out, and the parents don’t need to feed it at this stage as the yolk that the chick has now fully absorbed will be enough to sustain it through this undisturbed recovery period.

Generally, if there is more than one egg in the brood as is often the case, incubation will have begun when the first egg emerged, and therefore each egg will hatch in the order it was laid, known as asynchronous hatching, but some species of bird don’t begin incubating until all eggs have come out and that leads to synchronous hatching, everyone hatches at once.

This is particularly useful for waterbirds whose young are precocial and ready to leave the nest in a few hours. Precocial birds hatch feathered and can walk and feed on their own but they have a low metabolic rate and grow relatively slowly, but as they all hatched at the same time, they can all leave the nest at the same time onto the water, minimising abandonment, and grow under the constant watchful eye of their parents.

Every stage of a new bird’s life renders it very vulnerable, but for many this is now perhaps the most dangerous of times.

When they do survive, they do it with style.

Altricial birds are those who stay in the nest for days, weeks, and even months after hatching, as they grow and develop feathers. Even though they hatch blind, helpless and naked they have a high metabolic rate and will grow rapidly during this time, but the adult birds do need to leave it alone to find food, and predation on these birds can lead to a very high mortality rate.

Parenting skills vary massively across species, as you would expect. From a human point of view, some birds are amazing parents and some seem to be quite frankly terrible at it, but whatever the strategy, success rates are usually quite high, even if not by their own “wing” – famously parasiticbroods like the cuckoo and the brown-headed cowbird leave it all up the host parents.

Birds who stay in the nest to grow will eventually have to leave it and find their own food. The parents are pretty much exhausted themselves by now, and learning must begin.

A bird that leaves the nest is called a fledgling. Many songbirds will take a couple of days hopping about on the ground to prepare for the strange world of flight, but some like hawks and eagles will take practice flights, developing their muscles by flying short distances from the nest.

Cavity nesting birds also tend to stay in the nest for longer than songbirds, and can actually fly fairly well when they leave.

Nest success is the term used to describe a brood who has done well – all or at least most of the chicks have survived the early days and have fledged.

The percentage of nest success again varies hugely across species and depends on many other factors like weather, disease, and food availability, but songbirds in temperate regions can have a wonderful 80% nest success, but equally likely it can also be around 30%. Cavity nesters fare on average much better, and nest success hovers around 66%.

Once the fledglings have mastered flight and can now rule the skies on their own, their lives become fraught with a whole new set of obstacles, and mortality is sadly high.

Of those that fledge, around 50% of them make it to their juvenile moult, and of those, around 60% make it their first breeding cycle. It is estimated that your average species has a 15% chance of surviving from the microscopic beginnings of the egg cell to the demands of adulthood.

The stark truth of it is, although a typical species can have an average life expectancy of many years, predation and environmental factors (especially for species who migrate, where losses of up to 70% can be expected) determine that the fate of many birds means they rarely die of old age.

However, there are the ones who made it through, and when they do survive, they do it with style: Chile, a flamingo in Australia made it to her 60s, twice her expected lifespan, and Fred, a sulphur crested cockatoo was still ticking along at 103 a couple of years ago, which is 63 years longer than most.

Admittedly, these birds and others who have lived long lives are in captivity in zoos or sanctuaries, but there is nothing to say this doesn’t happen to wild birds we’ll never know about - 15% can still be a lot of birds.

One bird who is free to go as she pleases is Wisdom the Laysan albatross, mentioned in a previous post here. We are happy to hear that Wisdom is still around and laid her 39th egg at the ripe old age of 70 in February 2021.

So, spare a thought for the ones we do see, and if their plumage features the marks of age, congratulate them on getting this far, and if they have the tell-tale neutralcolours and tufts of a juvenile just learning the ways, wish them well, and hope to see them again soon.