Back to tales
Anatomy
,
Bird behavior
,

How Do Birds Mate? 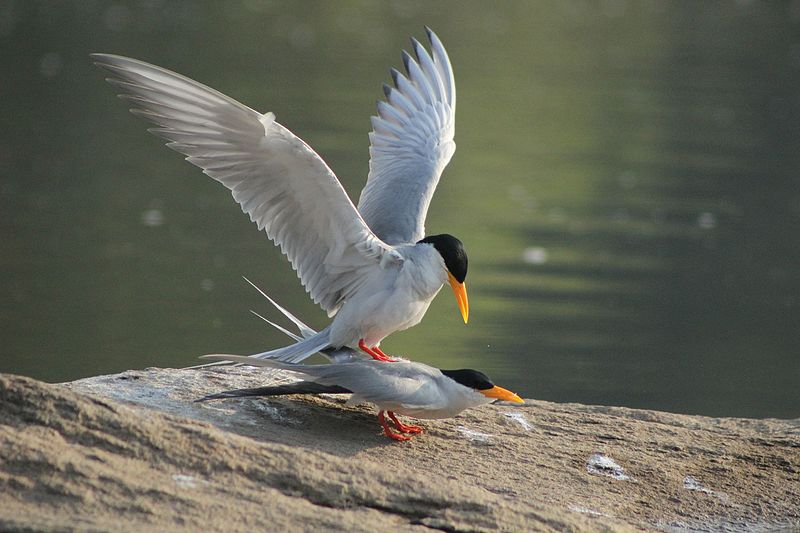 Courtship between birds is elaborate, intense, takes a long time, and can be exhausting. Not so with sex. Hop on, hop off, and that’s the lot. How do birds make one of the most important acts going seem so, if you’ll pardon the expression, easy?

The non-breeding season of winter comes to an end as the temperatures warm up, the days get longer and lighter, and food availability is starting to increase.

When spring arrives, the mating season, birds’ hormones will begin to buzz and surge through their bloodstreams, indicating it is time to get paired off, pretty sharpish. Elaborate courtship displays will be taking place all over, and you’ll be able to hear the sound of birdsong everywhere, as males compete to win the love of their lives… well, the next few days, at least.

Firstly, abandon all you know about mammalian sexual organs.

So, what actually happens, and how? We may well have seen a bird hop on top of another, some frantic feather shivering ensues and then away they fly, so what is going on under all that fluff?
‍

Do birds fall in love? How much romance is in their lives? Is there any at all? Read more!
‍

It ain't what you do

Firstly, abandon all you know aboutmammalian sexual organs. Male birds don’t have penises, which I have to admit was a bit of a relief to find out. The reproductiveanatomy of birds is far simpler, and there is no penetration. Instead, both male and female birds have a specialised opening at the base of their tail feathers known as an avian vent, or cloaca (kloh-AYK-uh).

This opening connects to a chamber where the sex organs lie – testes in males, ovaries in females. Sperm and eggs are discharged from this opening, depending on the sex, and of course with the females this is where the sperm goes in. This opening also connects to the bladder and digestivesystem, so is also where faeces are expelled, although not at the same time. Usually.

The act of the cloacal kiss usually takes less than a second.

At all other times of the year, the cloaca is mostly undetectable, and scientists wanting to attach a monitoring transmitter or legring can attempt to determine the sex of the bird by blowing on the feathers to part them. If there is a slight protuberance to the cloaca, which would normally only be visible during breeding season, they would know they have a male in their hands.

Hormones cause it toenlarge and swell, protruding outside of the feathers. It will reach its peak size just at the point when it is absolutely the time to reproduce.

Courtship has either been successful, or a long-term mate has reappeared on the scene, and the time has come. Whilst some positions and postures can vary slightly across species, the sex life of birds isn’t some hedonistic netherworld of lustful acrobatics – birds can’t have sex whilst flying, for example.

There’s pretty much only one position that works, given the site of each bird’s vent, and that’s the male on top of the female, with both birds facing the same direction. She will hunch down and move her tail feathers to one side, whilst he will arch or curl his body downwards so that their cloacas touch.

The male will have already generated sperm which he has stored in the folds of his cloaca, and rubbing the openings against each other will stimulate the flow of this sperm to enter the female’s cloaca.

This act of passing sperm from male to female is known rather sweetly as the “cloacal kiss”. If successfully passed on, the sperm will then continue deeper into the female’s body to the ovary where, upon fertilisation, the egg formation process will begin. Depending on the species, eggs are ready to be laid in just a few days, up to a few months.‍

The act of the cloacal kiss usually takes less than a second, but maintainingbalance can slow things down a bit, and several kisses may occur.

Birds will usually mate several times for about a week to increase the chances of successful insemination. Again, depending on the species, the males will then leave the female alone and probably find another mate, or will stay with her to raise the family together, either until the chicks are hatched, or for life.

‍Those birds who do not remain exclusive can go on to mate with other birds. It is perfectly possible for the female to have several males’ sperm inside her, with her eggs belonging to different fathers.

It is also not unheard of for a female to lay her eggs in several nests, as nests of the same species will generally look alike, thus giving rise to the perfectly ordinary situation of a bird raising chicks from different parents.

You know when you were at school, and the teacher told you one thing, but if you then went on to study that thing in greater depth, you actually found out that thing you were first told wasn’t quite the whole truth? Well, confession time – ducks have penises. There, I’ve said it.

The successful passing of semen only occurs between 1-2% of the time. Those are some lousy odds.

Waterbirds have actually developed a different way of reproduction that does involve penetration, for the simple fact that there is far too much risk involved. Ducks mate in the same way in terms of positioning, and the weight of the male duck pushes the female duck’s cloaca below the surface of the water, so any sperm passed via pressing of openings together will wash away in no time.

Scientists actually think that during “normal” bird copulation, the successful passing of semen only occurs between 1-2% of the time. Those are some lousy odds.

So, ducks, geese, swans and other water birds as well as the ratites have all developed penises, which is actually an extension of the cloacal wall that is made erect by lymph, instead of blood as with mammals. However, the possession of a more assured method of fertilisation is still only a brief encounter, and is over in seconds.

Courtesy of Pixabay[/captionBirds will often construct a nest and then mate close to that nest, so if you are aware of nesting sites then try to keep a distance during the first few weeks of spring, and always stay quiet when around birds anyway.

If you’re the type to get embarrassed or feel awkward if you see birds mating, then don’t sweat it – the birds will be quite thankful for your blushes and will appreciate the privacy.

Whilst the mating itself is so brief and it’s usually over before you realise what was going on, to the birds it is literally a matter of life or death, and disturbance during the delicate act of reproduction can spell the end of the family line for that bird if you’re not careful.

However, understanding how this process works and recognising this important behaviour can increase your knowledge and awareness of their plight. If you can ensure you can keep out of sight and sound, such as from a hide in a reserve or from indoors if you are lucky enough to be afforded a good view, then do take that unique opportunity to witness life in the making.

Better still, if you can identify the birds that you saw, then using a field guide or online resources, read up on their life cycles, learn the duration of growth in the shell and hopefully you will eventually hear the cheeping of new chicks, and may even be present when they finally fledge the nest later in the season, a remarkable and thoroughly beautiful experience.