Here Comes The Hot Pepper … Why Can Birds Eat Chilies? 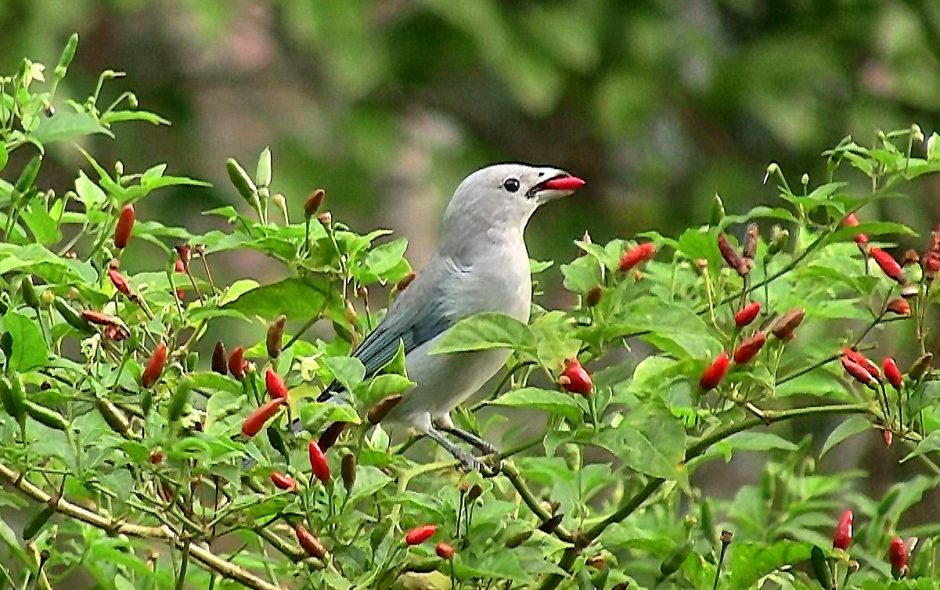 The Carolina Reaper is the world’s hottest chili pepper. Most people fear this reaper, but birds can quite literally make a meal of many chilies with no problems. How can this be? Why don’t they start crying and gasping for milk? Let’s find out…

Too hot to handle

The chili peppers of the world are graded with something called Scoville Heat Units, or SHU. Jalapeño peppers usually come in between 2,500 to 8,000 SHU, and further up the scale, habaneros weigh in at 100,000 to 350,000, which is VERY HOT.

The Carolina Reaper has an unimaginable grading of 1,569,300 SHU. In 2018, a man taking part in a New York state chili eating contest was eventually hospitalised after eating one. It took three days for him to seek medical attention, after enduring severe neck pain and then something known as “thunderclap headaches”, excruciating and debilitating headaches that only last for a few seconds but are unbearable and frequent.

His symptoms baffled doctors, and after testing for various neurological conditions failed to find the problem, it finally occurred to him to mention that maybe the chili eating episode had something to do with it…

In 2018, a man taking part in a New York state chili eating contest was eventually hospitalised after eating one.

He was eventually diagnosed with Reversible Cerebral Vasoconstriction Syndrome: arteries in his brain had shrunk to such a tiny diameter that blood was failing to get through. This usually happens with some types of medications, or illegal drugs, but this was the first case of a pepper causing such a reaction.

There was nothing they could do except prescribe very strong painkillers and wait. His symptoms gradually abated and a CT scan five weekslater showed his vessels back to their normal pumping width.

Birds, on the contrary, do not get flustered at all. They have been seen grazing their way through chili plants like nobody’s business. It’s not that they’re really good at hiding their discomfort, it’s just that the same thing simply doesn’t happen to them. Why is that?

Birds … have been seen grazing their way through chili plants like nobody’s business.

The first thing considered was to understand the sense of taste in birds. It is a worldwide accepted view that there are five types of taste: sweet, salty, bitter, sour and umami (savoury). Over the years, scientists have debated adding one or two more, but for the main part they only concentrated on the basics.

As birds have on average 30 taste buds on their tongues (chickens only have 24, whereas the much more savoir faire pigeon has a lofty 37), and humans have over 10,000, It was originally thought this was the explanation why birds can chow down on the most mind-blowing of peppers whereas we crawl to a corner and gently rock until the pain stops.

But it is this actual sensation – pain – that is the key. It turned out that the taste of the pepper didn’t need to be considered at all, it’s how it feels. You don’t have taste buds in your eyes, but there’s a fair few of us out there who can recall the trauma when we’ve been dumb enough to shove our fingers in them after slicing up a few chilies.

In other words, birds have a much higher threshold for pain from capsaicin than anything else.

The active ingredient of chili peppers that gives them their SHU quality is the chemical capsaicin (“cap-SAY-uh-sin”). It is thought that the directed deterrence hypothesis is employed by chili plants; that is, the fruits produce this toxic chemical that is attractive to organisms that will further their existence, and abhorrent to those that won’t.

Studies have shown that plant predators who are typically poor at spreading seeds, most mammals in fact, are susceptible to capsaicin, but birds, who are the crème de la crème of seed dispersal, don’t bat an eyelid.

The pain we feel is communicated to our brains by a specific pain receptor, snappily called transient receptor potential cation channel subfamily V member 1, TRPV1 for short, or better known as the capsaicin receptor. All mammals have this on their tongues, as do birds, but it was found that in birds there is only a 68% molecular similarity between this receptor and all other central nervous system receptors, which are less than 95% different to each other.

In other words, birds have a much higher threshold for pain from capsaicin than anything else. It doesn’t make them invincible, of course – The Carolina Reaper would probably live up to its name if a bird ate one, but they have been seen to withstand peppers with capsaicin content of around 20,000 parts per million, or habanero territory.

That biological difference in receptors on birds’ tongues means that they feel no heat when eating chili peppers, and will happily gobble them all up. But then later that day after having flown far away, they of course then defecate the undigested seeds somewhere else, where the seeds will then usually germinate.

It was therefore concluded that there is an absence of these pain receptors throughout a bird’s anatomy, otherwise they wouldn’t put themselves through the rigours of eating them if pain were still felt … elsewhere.

Chili peppers provide many benefits to us and birds, including antioxidants, immunity support and possibly even, ironically, pain relief. One of the attractions to chili eating contests is not just the bravado, but there is science behind it. Upon consuming chilies, after the pain, our body then releases dopamine and endorphins, chemicals that provide a euphoric, almost narcotic effect.

The man who created The Carolina Reaper, “Smokin’” Ed Currie is a thyroid and skin cancer survivor and whilst not an oncologist, he swears by his produce to having saved him, although no medical link has been found yet.

But not only does he eat it five times a week, he also donates 50% of his profits to cancer research. Whether the cure is there or not, that is an outstanding commitment to trying to find out.

Spicing up the menu

Knowing that mammals aren’t attracted by chili peppers means that some people use that information as a handy tip when it comes to setting out food for your birds. Adding some hot sauce or ground chillies or cayenne powder to your bird mix may seem like a cunning idea, but actually truth be told it isn’t that nice for the squirrels or mice who want to eat your birdy treats.

Of course, we’ve seen that they don’t like it and will actively stay away from peppers, but that’s an in-built recognition kicking in. If you disguise the chilies amongst the feed, then they will still try to eat it, and it has been found that capsaicin causes painful irritation to the tissue lining of their mouths, making them not want to eat anything, which can of course lead to deficiency in nutrients and possible starvation, depending on how desperate the little fellas are.

There are plenty of rodent-proofing methods out there you can try without resorting to harmful ones.

Remember when you are next riffling through your kitchen cupboards for some tasty titbits to entice the birds to your yard, you can now literally spice up your menu with some chili peppers, safe in the knowledge that it won’t cause any harm to our airborne amigos.