Back to tales
Literature
,
Trivia
,

Ghostly Birds and Other Winged Horrors 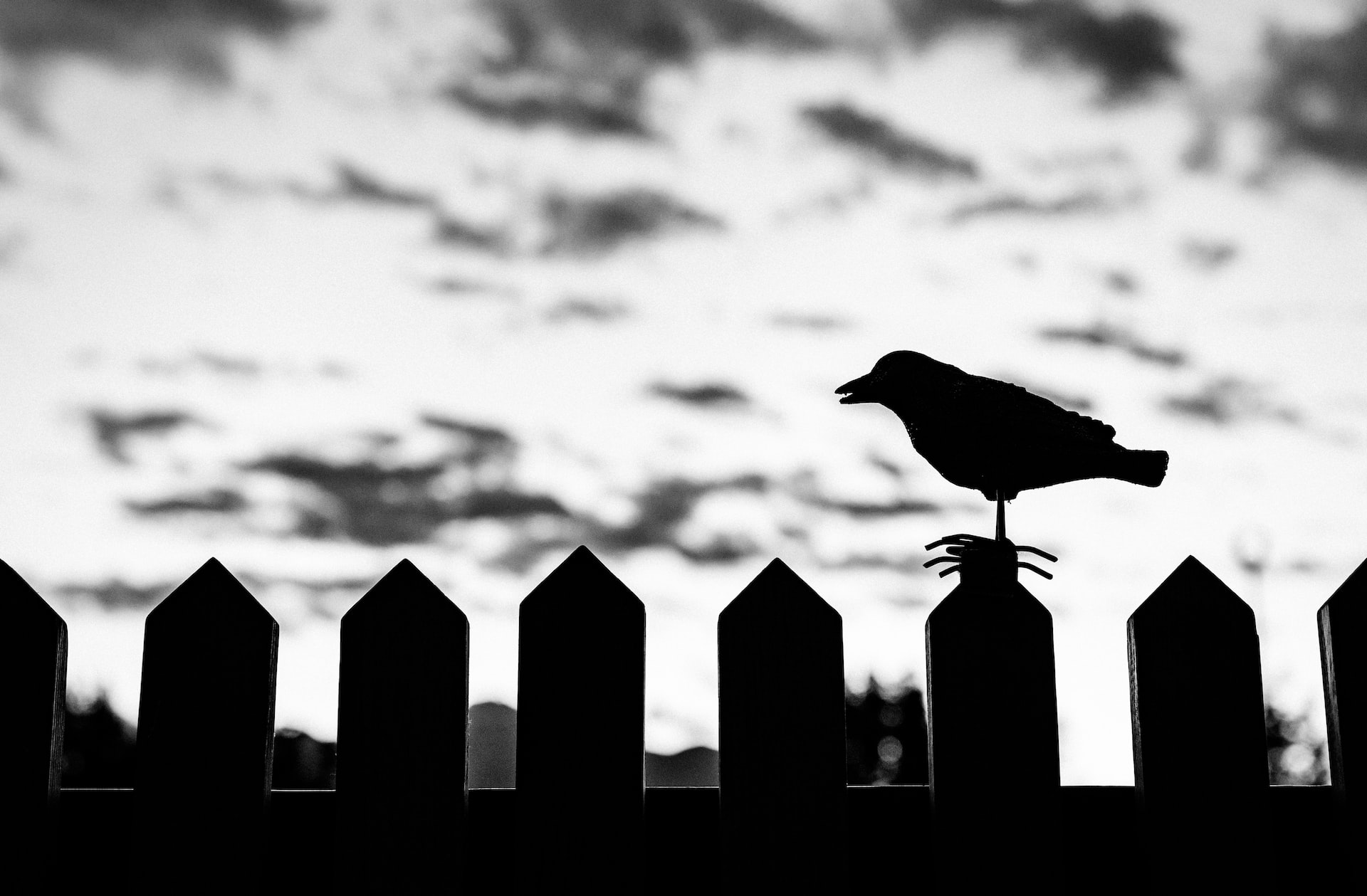 From the Brothers Grimm to modern-day storytellers, birds have had main or supporting roles in horror literature for centuries. In todays’ Halloween blog we take a look at some of those gruesome appearances – from behind our fingers, of course.

‍Edgar Allan Poe cemented the idea of a huge black corvid bringing desolation and misery to our lives in his poem The Raven.

The unrelenting deep voice of the bird perched atop the protagonist’s door conveys little else other than all is lost, love has gone, and there is nothing to save that man’s soul anymore. If you are one of those people who like to scare themselves silly on occasion, consider picking up a copy for some light reading this Halloween night.

Alternatively, here are some more bird moments in horror that may take your fancy.

Natural horror is a subgenre of horror literature and film, and examples can be found in all cultures. There is something deeply unnerving, with unthinkable possibilities, of the natural world turning upon us.

The popularity of this style is plausibly indicative of a species that has become so out of its depth in the natural world that it has grown to be suspicious of it and fear it.

One of the most famous scenes in natural horror cinema comes when Tippi Hedren, obliviously smoking a cigarette whilst sitting on a bench in front of a playground as off-camera children sing a monotonous rhyme, adding to the suspense, suddenly spies a single crow flying overhead.

Already unnerved by various avian attacks of increasing violence on her colleagues, she follows its flight path and turns to watch it land behind her, where it joins ranks: on every bar and rung of the jungle gym, a legion of waiting crows has amassed.

Tippi scurries into the schoolhouse to issue an inevitably pointless warning.

Hitchcock’s The Birds is widely cited as one of the scariest films ever made, but the source material is arguably more terrifying. Daphne Du Maurier’s “The Birds”, much like another horror novel of hers, Don’t Look Now, also made into a film, encapsulates the brooding menace of the world outside our windows, a world we can never control and are at the mercy of, if it decides to target us. Instead of sunny California’s Bodega Bay, the original setting for The Birds was Du Maurier’s home county, Cornwall, in the UK.

The bleak rolling moorland and the somber encroaching weather such a landscape so often creates enhances the isolation of the stone cottage where the monstrous unraveling of natural law takes place around the family that tries to survive it. The protagonist, Nat, is the stoic father striving to protect his family whilst at the same time pretend nothing is wrong, as the fear escalates, starting with a single tap at the window.

At one point, he tells his son to mind his table manners as the thud of birds against the shutters increases with every passing minute. The birds have been observed gathering in greater numbers across the country, and a nationwide emergency is declared over the radio; suddenly, the airwaves fall silent.

The BBC didn’t even go silent during the war, Nat ominously ponders. The Birds is a truly menacing story, and a perfect fit for a jolly good read on the night the souls of the dead walk the earth.

The sparrows are flying again

Master of horror literature extraordinaire, Stephen King is not averse to adding a birdy element to his creepy tales. As well as the very short story For the Birds, his one-page science fiction joke where pollution has killed off all of London’s rooks and an ornithologist is dispatched to source more from the United States, King’s The Dark Half stars another bird, the humble sparrow.

Actually, one of our most populous birds crowd these pages in their thousands. Seen by some as a pest, in this story of alter-egos made real, these birds are most definitely the last pest you’ll ever see.

The concept of beings carrying your soul to the realm of the dead is not new; these psychopomps can be found in all cultures, and some do appear as birds. Stephen King’s sparrows as agents of Death lurk and wait throughout the book, come to assist a bedeviled writer rid himself of his own novel’s protagonist-in-the-flesh.

Inspiration for King’s use of sparrows is thought to come from an H. P. Lovecraft poem called Psychopompos: A Tale in Rhyme: “My wings are the wings of dread”.

Birds as psychopomps can be found throughout literature: whippoorwills, loons, curlews, and even swallows have been credited with undertaking this most grisly of tasks. Lovecraft also wrote a short story, The Dunwich Horror, when indeed on Halloween night, flocks of whippoorwills scream above a farmhouse where something awful and evil is brewing.

Perhaps King chose sparrows to convey that death is as common and ubiquitous as they are; always with us, always there.

Worthy of a mention: who can forget the cursed crew mates of the Ancient Mariner whose neck is adorned by the albatross he killed? Coleridge’s epic poem is right up there with scary bird imagery, even if the bird did nothing but die. The title bird in Irvine Welsh’s experimental novel Marabou Stork Nightmares is not exactly a doer of evil either, but instead exists in the fevered comatose mind of the protagonist as his dream-self hunts for them in the wilds of Africa, whilst his incapacitated mortal existence meets its own undoing.

Lastly, we can’t avoid the sheer grief and sadness that our final mention conveys; in The Ghost Birds by Karen Russell, the horror does not come from the birds themselves, but from the fact that there aren’t any birds in the world left. That thought is possibly the most terrifying thing of all.