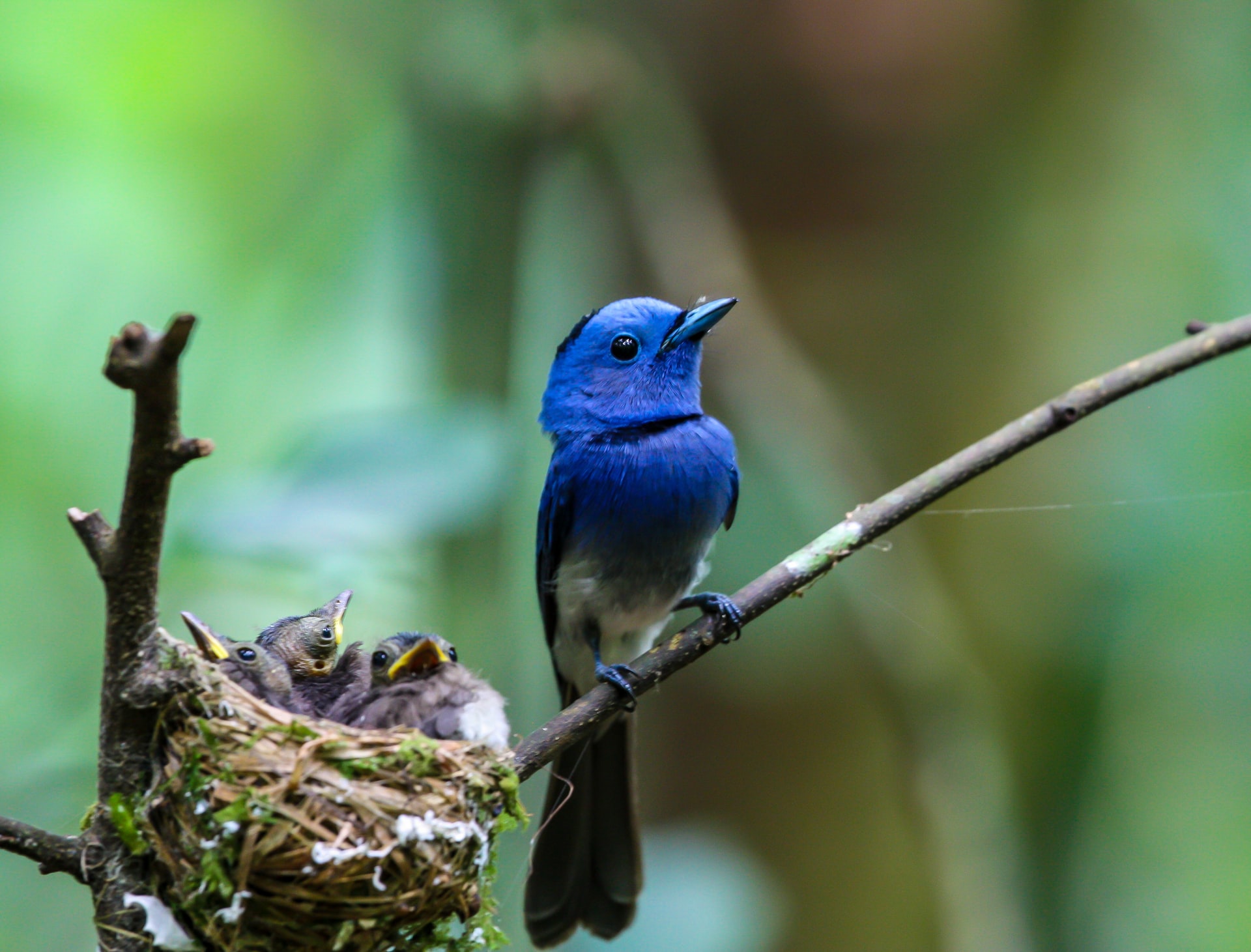 Shakespeare said, “It is a wise father that knows his own child”. Most animals’ parenting duties are carried out by the female of the species, but in birds, the males help out too. To celebrate Father’s Day, we take a look at how the responsibility of being a daddy bird plays out.

In the mammal world, a measly 5% of males get stuck in with the new-borns: humans do, of course, as well as lions, gorillas, and other notable animals like the seahorse, famously going above and beyond by even giving birth to the young as well.

At the other end of the scale, an estimated 85-90% of all bird species equally muck in, with around 1% (90) where the males do it all (except laying the eggs).

Raising a family involves a lot of time and energy, and with such a tenuous existence as it is, most bird species share the duties to ensure as successful a brood as possible. Nest-building, incubation, feeding the young and song lessons are the crafts the father knows, and if the female has chosen well, he will be exemplary in his duties.

After successful mating, male birds help out the females in a number of ways, and one of the first things to do is get the nest ready.

Whilst many females of the species actually create the nest, the males will be darting back and forth bringing the construction materials to the site. Cavity nesters like downy woodpeckers create the hole together.

Once the nest is ready, some male species then take up sentry position and sing for hours on end telling everyone this is my territory, there’s a family here, go find your own spot. This is an important part of guaranteeing food security – if any bird hopped by, they’d eat up all the resources that are going to be vital when the chicks hatch.

Some females will carry out what is known as polyandry – choosing multiple male partners to ensure successful reproduction. If she has recently laid eggs, the “original” male remains to incubate for the duration whilst she heads out to do what she must to ensure species survival.

There are a number of species where the males also are the sole incubators at night, allowing the females to sleep, such as cormorants, woodpeckers and flickers, and at least one species, the African common waxbill, is known to share the incubating at the same time, which must be a tight squeeze, but very sweet.

For those species where the females do the majority of the incubating, the males are not off gallivanting; on the contrary, their role then is to retrieve as much food as possible to keep the mother bird warm and well fed. Sitting still may not look like hard work, but being constantly alert is exhausting.

A study from 2008 rather broadly concluded that dinosaur theropods, the beasts that many believe our modern-day birds evolved from, had a similar paternal incubation role; having found fossilized eggs in several nests they also found the remains of only adult male theropods with them, potentially “guarding” over them.

Whilst this does sound like a nice cozy theory, the authors themselves point out that far more evidence would be required to definitively conclude such a thing.

But it’s a nice thought, and not without precedent – several species of large flightless birds like emus and rheas incorporate male-only care at nest sites.

The male cassowary sits alone in the nest for around 50 days, without food and very little water until the eggs break open. In the case of the tinamou, the female seeks out another mate after laying her eggs, (there are four times more female tinamous than males, so competition is tight), so the males are the sole incubator of the eggs, only leaving for short periods to find food.

When there is no significant other to help share the burden, improv becomes the name of the game here: if a male tinamou feels threatened whilst incubating, he sometimes puts on a fake injury display, hopping on one leg, attempting to fly then falling over, creating distance to lure the predator away and hopefully lose interest.

Other times, he spreads his wings over the eggs and arches his back, displaying beautifully marbled tail feathers that instantly mimic the surrounding scrub plant life, or in the case of the Solitary tinamou, he raises his rump aloft where the splayed feathers convincingly mimic an owl.

Of all the lessons the male bird teaches their offspring, arguably, none can be more important than teaching the young males the language.

Birds teach these songs using techniques very much like our own: the father sings a phrase that the youngster listens to, who then repeats, until they have got it right. If you know what to listen for, you can hear this happening throughout spring and summer, and if you really know your stuff, you’ll be able to hear the mistakes made by the young bird.

But with appropriate guidance and reassurance, this young male will eventually master his song, and this will one day help him to find a mate, build a home, and then have the opportunity to teach his kids just how it’s done right.

Studies have shown that if a bird lacks a father, either through predation or accident, other male birds become father figures and take over singing lessons where they can.

Young males that go through this crucial song learning stage without direct guidance will only produce a shadow of the species’ song, a stuttered and often unrecognizable version.

This sadly means that they are unlikely to go on to reproduce, as females gauge attractiveness based on how well the males can hold a tune. It may seem cruel, but this is a safety net of sorts: if the poor performance does not elicit a relationship, at least that bird won’t then try to teach their offspring what essentially amounts to a karaoke version after several tequilas.

There is a poignant quote from that most prolific of writers, Anonymous, that goes: what you teach your children, you also teach their children.

The influence of education runs deep, and will shape the way those chicks will eventually parent, if they go on to do so. The best bird dads will ensure that their technique is so effective that the other young male birds not only learn the ways of their species, but also how to teach them, so that when he himself is finally a father, he is the best dad a chick could ask for.