Back to tales
History
,

F is for Falconry 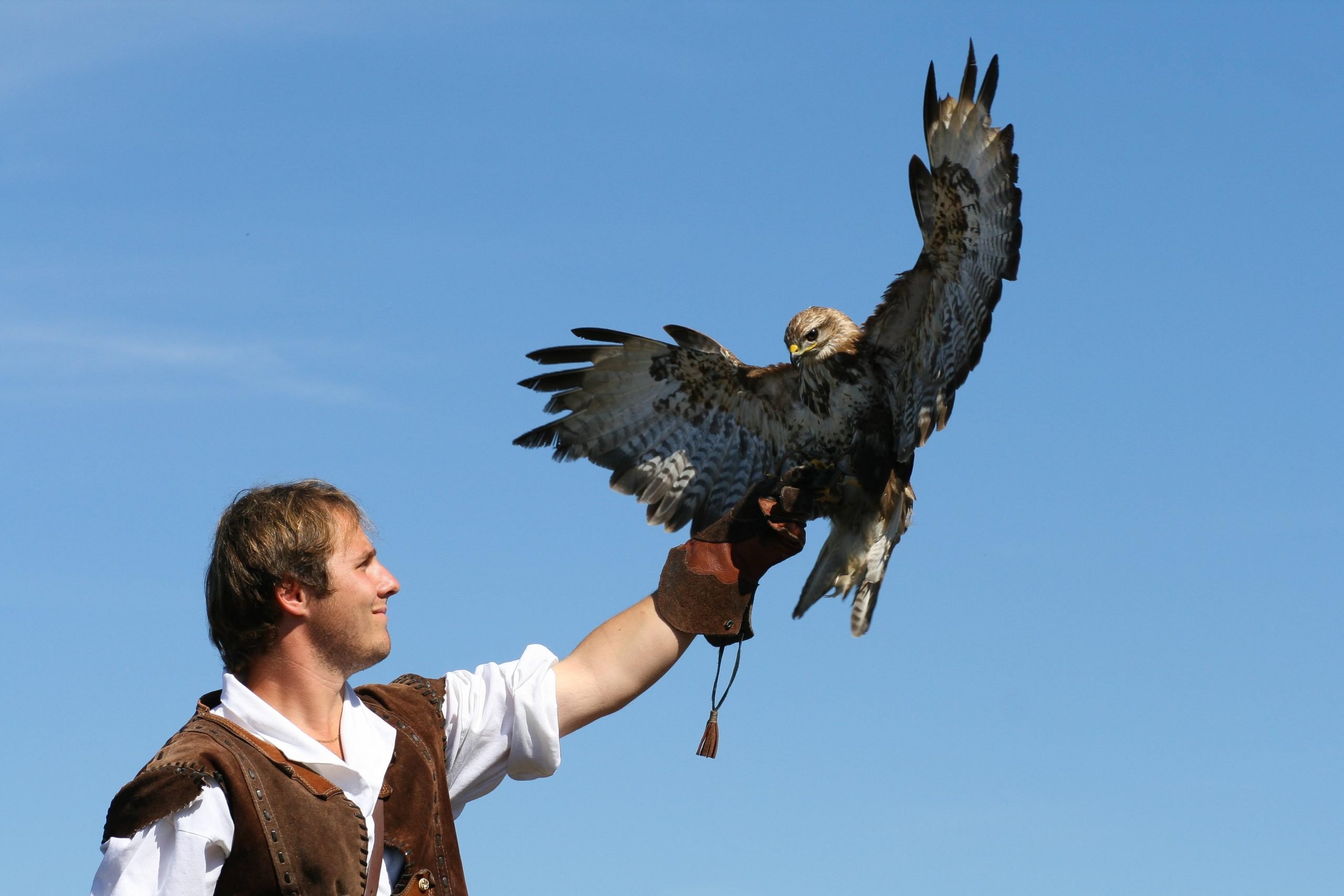 Predator on an arm. Courtesy of Pxhere.

Falconry is older than the written word itself and is so revered in some parts of the world today that falconer’s birds are allowed to sit next to them on a plane. We look under the Dutch hood at the evolution from hunting for food to battle prowess and sport, welfare concerns, and salvation.

Falconry is defined as “the taking of wild quarry in its natural state and habitat by means of a trained raptor”. As with anything that involves a captured wild animal, falconry has plenty of vocal critics, whose view that a wild bird should be able to fly when it wants and needs to, and not be caged at someone’s home, are at the core of their distaste.

Many find the practice of “manning” a bird, the process of tethering and acclimating it to be used by a human, is seen as outdated and cruel. Some parts of the world have banned it altogether, and pressure is on for others to follow suit.

Where it is legal, there are strict rules that all licensed falconers must adhere to, but of course, there will always be illegal activity: regulation and enforcement of welfare laws is paramount and any cruelty must be investigated and stopped.

Advocates for falconry highlight the benefits, keen to point out that many falconers work with conservation organisations, wildlife sanctuaries and rehabilitation centres. Detractors concur that this is indeed of great benefit, but their focus has never been in that direction. Many would like to see the art of falconry limited to just those organisations.

Advocates for falconry highlight the benefits.

On the whole, trained falconers are famously reluctant to take on apprentices as too many are only interested in the challenge of taming a wild killer and elevating their own ego, but not invested in the minutiae of the bird’s welfare and needs.

Becoming a master falconer can take at least seven years, after an apprenticeship of at least two. Purchasing or capturing a bird requires a permit, and fees, veterinary bills, food (only fresh raw meat), housing, equipment, travel solutions, all come at great financial cost. For these and many other reasons, there are only around 10,000 licensed falconers in the world.

Basic Ways To Identify Raptors » Click to learn the difference

The practice of tethering a bird of prey to a gloved forearm and then training that bird to fly out and hunt – and then return again – has been intertwined with human history for millennia. According to one of the world’s longest epic poems, Shahnameh or Book of Kings, written between 970 and 1010AD, a young ruler called Tahmuras reigned in Persia around 8,000 - 10,000 years ago during the Pishdadian dynasty.

He divided his time between waging war on the demons who plagued the land using magic and his mighty mace, and cultivating practices for humankind, such as spinning wool, domesticating chickens, and teaching falcons to hunt for him.

Occurring well before writing came along some 2,500 years later, these exploits of Middle Eastern rulers and their subjects had been passed down through generations via song and storytelling, and some believe this mention of the art of falconry is proof of its existence long before the often-cited origins, but others believe this is just the imagination of the poet at work, weaving known methodology from later times into myths and legends for effect.

The favoured origin story is that falconry first began on the Mongolian steppes some 2,000 - 4,000 years ago, where Great Khans would develop their skills between battles, hunting for food or flying for sport. Over the centuries the practice of keeping a falcon or hawk spread to all corners of the world, firstly heading eastwards and then west.

Japan, although relatively late in the game, took a shine to it for its samurai warriors. The earliest records from 350AD detail how it was imported to the island nation from Korea and swiftly adopted by the military, where it would fall in and out of favour depending on whether Buddhist ideology or martial law influenced rulers.

Likewise, all across the Middle East, India and the rest of South Asia, falconry or hawking as it is also known was sometimes carried out by every level of society - it was the main means of subsistence for the Bedouin people for 4,000 years – but more often than not would be only for aristocracy: elite noblemen, kings, royals, Sheikhs. Cavalries were also trained in it, striking fear into their enemies with their mastery of not only an armoured horse but a hawk to boot.

In the Middle Ages in Europe, it was the envied sport of royalty where status decreed which bird you could fly: a gyrfalcon for a king, a rock falcon for a duke, a peregrine for an earl, a goshawk for a yeoman, and a kestrel for a knave. If women were ever allowed, they could use a merlin.

50% of all falconers still exist in the Middle East; the United Arab Emirates declared the falcon its national bird, and is considered so important in the nation’s culture that it is the only animal allowed to travel inside the cabin on an Emirates airline flight. The capital’s Abu Dhabi Falcon Hospital is the largest of its kind in the world, whose conservation efforts have released over 1,600 rehabilitated birds back into the wild since 1995.

Together we will rise

Many people have found their hearts and lives healed or made whole with the help of a bird on the arm. That our relationship with birds is one of awe, wonder, fear and respect is not in dispute, but that connection must be reciprocated, and their lives must not be harmed or torn apart to fulfil it.

During my research for this article, the modern-day falconers I found were at great pains to express their admiration and worship for the birds, never less than aware of the privilege they had to be close to one.

For Adam Baz, his dream of becoming a falconer practised in the ancient ways of hunting took a career-minded sidestep into abatement falconry, an increasingly popular and lucrative business. With companies desperate to fend off bird “pests” from their airports, vineyards, crop farms and so on, employing the natural predator and prey relationship has proven to be far more effective instead of costly inferior, ineffectual and often inhumane methods.

Baz also operates his own one-man falconry school, providing demonstrations and experiences, keen for members of the public to “get a glimpse into the world of falconry so they see the quality of life that these birds have”.

The envied sport of royalty where status decreed which bird you could fly.

In a former insane asylum just down the road from a juvenile detention centre in Washington DC, former drug dealer Rodney Stotts is now a master falconer, and his license means he can trap juvenile birds each year, and when mature and fit from their training, he releases them.

Working with community development experts he welcomes young and old people alike to see and learn about the birds in an “outside-the-box” learning experience, one he never had an opportunity for, something which he firmly believes contributed to his compulsion to combat boredom through crime and drugs. Stotts proclaims “Falconry can help build character, compassion and caring. Its importance is immeasurable. It changes lives.”

Helen MacDonald’s acclaimed memoir H is for Hawk is about how after the death of her beloved father, she needed something big in both the literal and metaphysical sense to distract her from the grief; she decided to rekindle a childhood dream of falcons and train a female northern goshawk.

Through the endeavour, she came to realise how far inside her own academic shell she had regressed; the shock of death propelled her into a new world where she discovered nature again, “a world of things out there”.

Coming to regard Mabel, the hawk, as a guardian angel, MacDonald says of her experience “At times of difficulty, watching birds ushers you into a different world, where no words need to be spoken.”