Recognize Different Types of Nests To Become A Better Birder 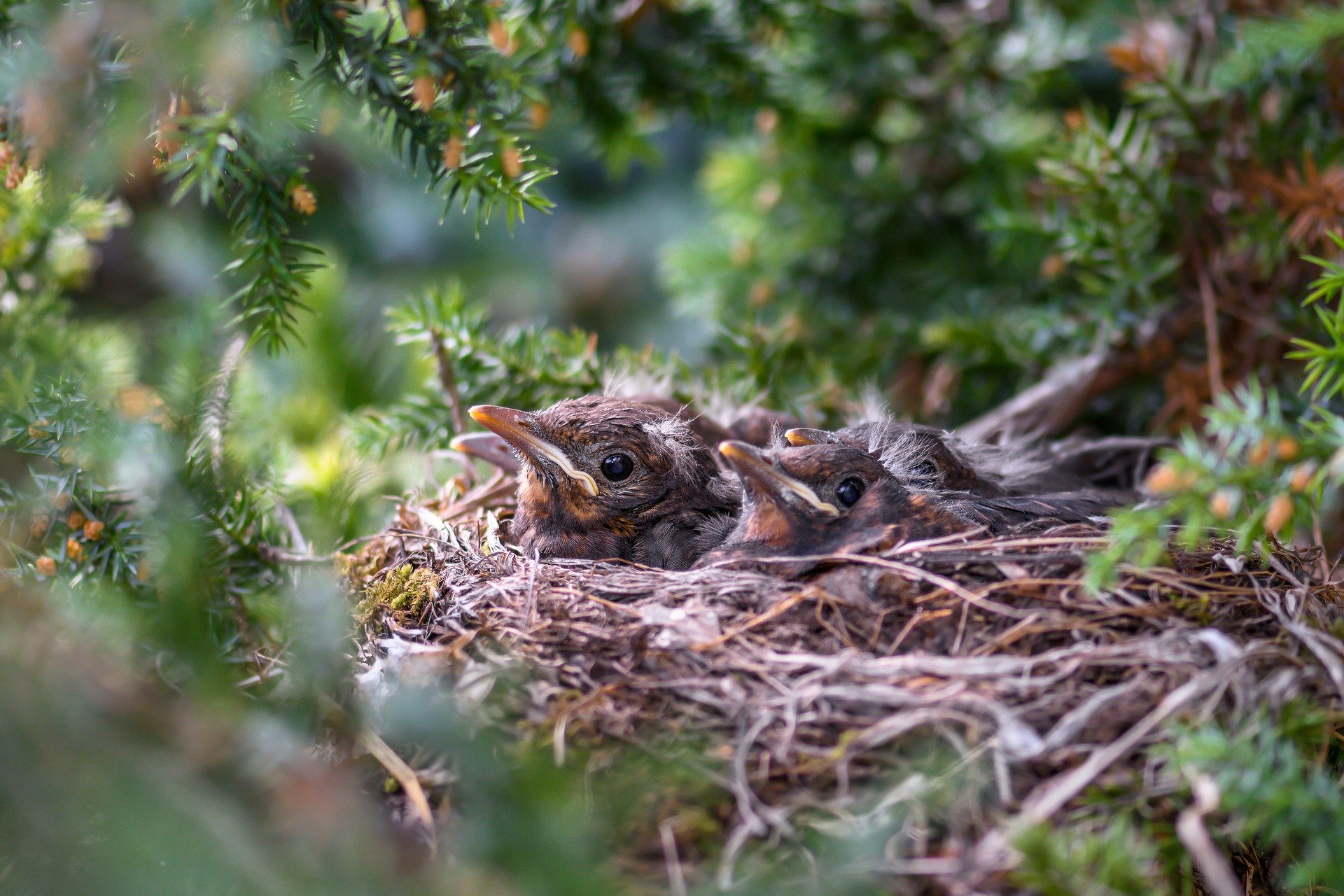 Bird nests are vitally important structures that range in style from scarcely a nest at all to an elaborate piece of architecture; Today we look at just a few of those variations and how recognising nest types can help you become a better birder.

Most of the birds of the world will build a nest and those that don’t will rely on another species to have effectively made one for them. Many of us will be familiar with the cup shape, but there is a huge variety out there. Given that there are over 10,000 species of bird with massive variations on a theme, it stands to reason you’re going to have a few differences in nest styles.

The style will however always remain true to the species – birds may be innovative in what they create but that innovation never alters outside a species. What works, works, even if all evidence to the contrary exists and you may think that bird could really do with learning a few construction tricks.

Contrary to what you see in the cartoons, birds don’t live in their nests all year round (although there are as always exceptions to this “rule”) and while some may resort to using them in bad weather, they tend to only construct them to provide a safe place to lay their eggs and protect their chicks when they have hatched.

Birds who use someone else’s nest are called brood or nest parasites, the most famous of which is the cuckoo, and you can learn more about their wily and sometimes quite shocking ways here.

Some species of bird will build a nest that can last for years, give or take a bit of upkeep every now and again, whereas others will make something that won’t last longer than a few weeks even if they wanted it to.

Some birds create nests by making holes in trees or riverbanks, like woodpeckers or kingfishers, or burrows, like bee-eaters, barbets and puffins, and those holes can remain for a long time but may only ever be used by the bird once, no matter how useful they could still be. These holes, if not returned to, will then serve as food stores or homes or nesting sites for other species of animal, from tiny insects to large mammals.

No matter the style of the nest, to meet the sole purpose of raising the next generation means it needs to uphold a few standards: be big enough for the potential brood, protect against the weather and predators, and provide warmth and comfort. To you or me, some nests out there barely seem to manage this, but to the birds, they are more than adequate, and you’ll often find there are ways that birds meet those standards in one form or another.

The cup-shaped nest is the most familiar and most common nest type, with thousands of species across the world using this style, as it can provide a good lookout for the brooding parent as well as a safe and warm bowl in which the eggs and chicks can hide.

Size and dimensions will differ across species of course, but their locations rarely vary and are most often found in the fork of tree branches, within vines or other climbers, and constructed from the same type of plant they are in.

If human habitation is nearby, you can also spy them tucked on window ledges, balconies, and door head jambs, or squeezed into some strange yet accommodating places, like car engines, old boots, post boxes, guttering and drainage holes, even in the scooped housing of a traffic light.

Birds don’t live in their nests all year round.

Most songbirds, warblers, swallows, hummingbirds, vireos, flycatchers and so on will all build cups using the materials that are most to hand such as twigs and leaves, binding them together with mud, saliva, and spider silk so that they can expand as the eggs hatch and chicks grow, and lining them with softer cushioning materials like their own or foraged feathers, sheep wool, animal fur, and moss.

Hummingbird nests, whilst of course ridiculously small just like their owners, are mainly built with spider silk, bark and lichen flakes which have excellent flexibility and stretch as the coffee bean sized eggs grow. Many birds build distinct inner and outer cup layers: wrens can be polygamous and the males will build several hardier outer-layered cups, and once a female has mated with him, she will then choose one and furnish the inner, softer layer.

Down in the dirt, up high in the sky.

There are some nests that look like they could do with some advanced DIY, and these often belong to shore birds. Many species of tern and plover simply scratch out a bowl shape known as a scrape, but the eggs of those species will be speckled and coloured just like the sand or earth, known as cryptic camouflage.

The birds may also line the scrape with shells or brush grass to add to the camouflage, so that predators have a hard time spotting something that looks like everything else. Birds who nest on cliffs make it extremely hard for predators to gain access, and as cliffs are never uniform, there will always be a crevice or outcrop to seek shelter from wind and rain and trap the warmth from any sun on the rock.

Remarkably, you’ll also often find that the ends of their eggs are more pointed than most “traditional” ovoid shapes – this ‘pivot’ prevents the egg from rolling off the edge, and in fact turns it in on itself back towards the point of origin.

Platform nests are used by a wide variety of large birds like raptors, waders, and storks. Conservation efforts to help species like the white stork or osprey involve the simple erection of a tall pole topped with a flat metal frame wide enough to accommodate the structure the birds then build on top.

Often seen in trees in years gone by, populations of these birds have suffered in recent times as forests have been cleared, but some have learnt to use our power-line poles.

There are some nests that look like they could do with some advanced DIY.

Most of these birds will use the same nest each year given the effort it took to create such a structure in the first place, and whilst many find there is some housekeeping to do upon their return after wind and storms have had their way, these nests are usually so well put together that their basic shape has held throughout the seasons.

Some species of birds create amazing soft hanging structures called pendant nests, like orioles and weaver birds. These birds are known as the seamstresses of the bird world and create pouches shaped like gourds that hang from beneath a branch, usually the outermost higher branches which are thick with leaves, making them very hard to spot.

They are lined with soft materials like plant fibres, feathers or animal wool, and bound together and tethered to the branch with vines and stems. Pendant nests are usually entered from the side and give these birds good protection from predators.

If calling something a weaver bird wasn’t a big enough hint at how it makes its nest, consider the sociable weaver bird from Africa. They construct a veritable maze of nests all woven together in a huge almost Sci-Fi like colony.
‍

Birds fake their own death or injury to protect their nests. We look at a few of the tactics birds use to keep the family line alive. Read more!

The largest nest of any bird in the world and often housing up to 100 birds from different generations at a time, social weavers are one of the few birds who use their nests all year. Their labyrinthine structure provides air-conditioned living arrangements in hot weather and heat retaining chambers in colder temperatures.

Learning the different styles of nests can help you become a better birder as they can provide clues for identification. Aside from simply keeping watch to see which birds come and go, (of course always using binoculars or a spotting scope and keeping your distance) nest identification can be hard, but you can learn to spot the clues that make each nest just as distinct as the species that built it.​

These birds are known as the seamstresses of the bird world.

More often than not you will need a field guide or you can look online to check up on the things you notice, to confirm your suspicions. If you spot a nest, think about the following characteristics:

Where is it: a cavity, a cliff, a riverbank, a reed bed, a hole in a tree, up high in branches or down low near the visible roots, in a shrub, attached to a wall?

How big is it: larger birds usually have larger nests, and some small birds that have broods of 5 or more eggs may also build larger nests to accommodate their growing hatchlings.

What shape is it: is it a scrape, or an elaborate structure, a cup, a pouch, a pendant, is it deep or shallow, is there a distinct entry point either on the top, the side, or underneath, or does it have a wide opening?

What is it made from: nests that are similar size and shape can be composed of very different things – is it made from dried grass and feather-lined or from twigs and moss? Some birds even use things you may not expect such as pebbles, sweet wrappers, string, and snakeskin.

Remember to always keep your distance if you are trying to ID a nest, as it may contain a new family that needs a stress-free environment in which to thrive until the time comes to leave. There are many online resources hosting webcams and live feeds to nest sites, and here is one site that brings together hundreds of cameras around the world in one place.

If you know that you have nests in your area then we definitely recommend investing in your own form of voyeurism, as so much can be learnt from watching a bird build and then populate their own nest, and the new lives that will eventually emerge to hopefully do it all again next season.