Back to tales
Bird facts
,
History
, 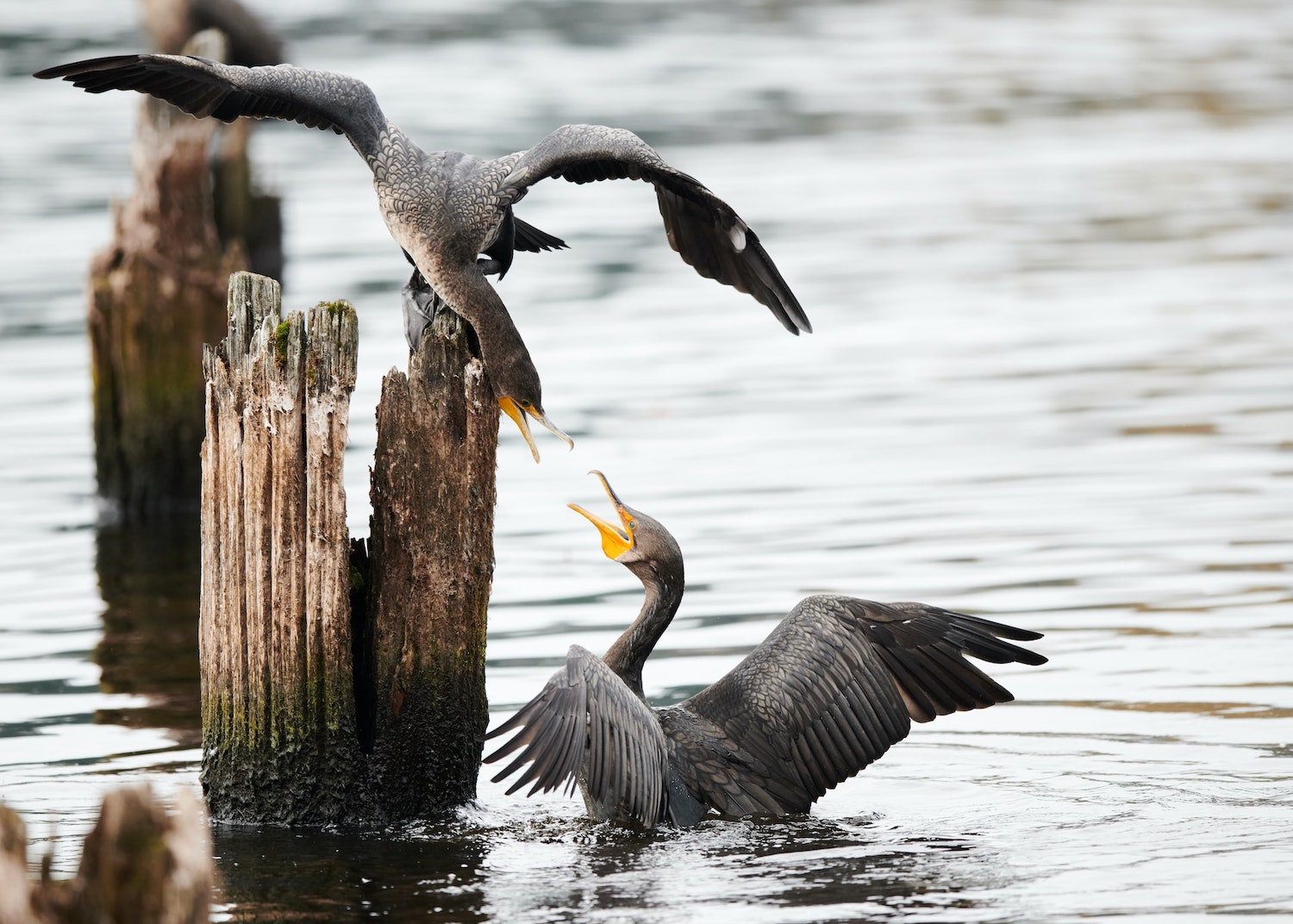 Cormorants have a double-edged existence in the human world, both revered and reviled for their fishing prowess. These aquatic birds are often confused with a more indelicate-sounding bird, and some believe that they know how to count. Today’s blog celebrates the long-bodied beauty of this prehistoric-looking wizard of the water.

First – the name: cormorant. It is a pleasant-sounding assembly of letters that befits the bulky form of its owner.

The scientific family name is Phalacrocorax, stemming from the Greek for bald and raven: for centuries, cormorants had been mistakenly believed to be some sort of corvid, probably due to their black plumage and the fact that they can be quite widespread.

The word cormorant is thought to be a contraction of the Latin corvus marinus, or sea raven (some readers may notice that the name is 90% identical to the sea-giant, Cormoran, credited with the creation of St Michael’s Mount in Cornwall, UK, from where he would set off for his mainland night-time raids of cattle and the odd villager for his feasts).

But corvids they most definitely are not, and all 40 or so species exhibit the adaptations to living a life on, in, and around the water.

Learn More: 45 Birds To Look For Around The Waterways

You will almost certainly have come across the bird ID-er’s most head-scratching conundrum – is it a cormorant, or a shag? Both types of bird are very similar – black-feathered, reptilian-like swimmers keeping low to the water, tilting their heads up towards the sky before they then dive down to find their fishy meals. Both also adopt that resting position when out of the water, upright with their wings spread like an eagle, drying their feathers in the air.

The name ‘shag’ comes from the English-speaking sailors that would find themselves in their company, and whilst the word may have somewhat debauched connotations in the UK and Europe these days, it originally referred to the shaggy crest of feathers found on these birds.

This is one of those differences that can help tell them apart, but it really depends on where in the world you are – in the UK, there are only two species, the great cormorant and the European shag, but the great cormorant is known as the black shag in New Zealand, as the birds in Australasia do have a crest that is absent in European members of the species.

Generally speaking, cormorants are heavy-set birds with wedge-shaped heads, flat foreheads and weighty-looking, long hooked bills. Their blue-green eyes are surrounded by featherless, pale and often yellow skin, and many species have pale feathers around the face. Their body plumage looks inky black in most lights but can have a bronze sheen to it, and some have white patches of feathers on their thighs during breeding season; some species exhibit these white filoplumes around their nape and neck as well.

Shags tend to be smaller, leaner, and less chunky-looking than cormorants, with a long slender bill without the characteristic hook, and their pointed foreheads bear that crest in the summer. The emerald-green eyes are surrounded by feathers, and their black body plumage shimmers with a green gloss, and often a purplish tint to their wings. Few shags exhibit white plumage, but when they do, the coverage is broad and only really seen in the Southern hemisphere island breeds.

This name swapping causes much confusion - the 20th century ornithologist Van Tets did try to generate consistency, proposing to divide the family into just two genera and attach the name "cormorant" to one and "shag" to the other, but this was not widely adopted. Cornell’s Birds of the World pages simply and cleanly club them all together as “Cormorants and Shags”; the mere mortals among us can be forgiven for a mix up every now and again as the name war rages on.

One thing that definitely unites them all, though, is their fishing prowess. Cormorants are expert divers, and this is mainly due to the fact that their feathers are not waterproof.

As these can become fully soaked, less air is trapped, making them less buoyant – they sink with the weight of the water. Holding their breath for between 30 and 70 seconds and diving as deep as 45 meters, they use their webbed feet to propel themselves along the ocean floor at these depths for a short time before pushing themselves back up and swimming to the surface with bills full.

Their diet consists almost exclusively of fish, as well as eels and water-snakes. Their collective noun is a gulp of cormorants, an evocatively appropriate name for that almost bile-inducing manner of throwing their heads back and gulping fish down whole.

Their ability to work together and effectively herd fish beneath the waves has led many landlocked folks living off the sea to respect them and care for them, using them as fishing companions.

Historical records show the Chinese, Macedonian, Greek and Japanese cultures all employing cormorants as they head out to sea in their boats, the birds loosely lashed to the sides by a loop of rope about their long necks to prevent them from swallowing fish.

In 1979, a study on the use of cormorants like this in China found that there is evidence to support the notion that cormorants can count. Fishermen would instruct them to dive into the waters with a shout or a tug on the rope.

Once they emerged unable to swallow their catch, they would drop the fish in a bucket, but after catching seven, the fishermen would loosen the knot, so that when next they jumped in the water, they could eat whatever they caught back on the surface.

If the knot remained tight after fish #7 plopped in, the birds refused to dive. Once the knot was loosened, into the water they went, and fish #8 was theirs.

Their voracious appetite has led to them being celebrated by some and abhorred by others, depending on whether one views the water as a commodity to be exploited or a resource to be maintained. Some regard cormorants as sinister and greedy, causing them to be persecuted by fisherfolk keen to keep the catch to themselves.

‍John Milton depicted Satan in Paradise Lost as a cormorant, sliding into the Garden of Eden unnoticed to tempt Eve; conversely, in many coats of arms they are said to have evoked the image of Christ on the cross with their outstretched wings, indicating nobility and sacrifice.

‍Norwegian folklore describes cormorants gathering as a sign of good luck, and loved ones lost at sea visit you in their form. In Ireland, their name is cailleach dhubh, the black hag, ‘cailleach' being a common Gaelic word meaning old woman or witch.

Arctic and sub-Arctic countries believed them to be magical beings capable of spiritual insight, and the skins of ones found dead would be cleaned and dried and worn by Eskimo women as protection, given that the birds were such highly admired predators. In Peru, their connection to the health of the environment was celebrated and their guano used as fertilizer.

One fact about them is that their wings are shorter compared to other avian anatomy ratios; they must swim well to enable them to surface whilst being weighed under with so much sodden feathers.

These shorter wings means that in flight, they expend more energy than any other flying bird. Despite this, they are one of the most successful families of birds on the planet.

We humans will always view animals through the lens that best fits our dominant perspective, but be they sea ravens, living fish hooks, beloved ghosts, cackling black hags, or the Devil himself, few among us can deny the cormorant excels in its environment.