Back to tales
Bird facts
,
Birdwatching
,

Can All Birds Swim? 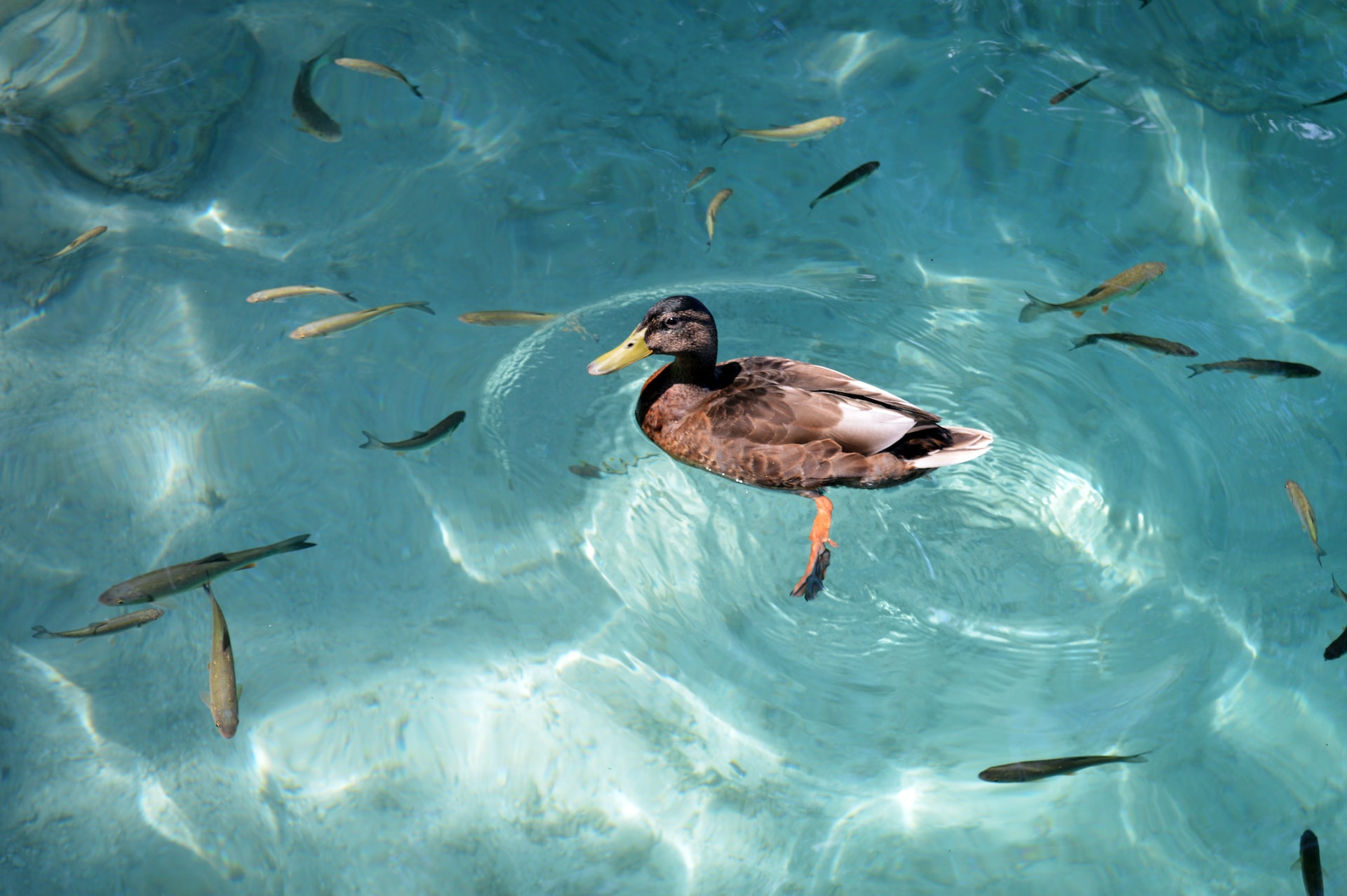 These wings were made for flying, and that’s just what they’ll do … oh, except for when they can help a bird swim. Some species of birds live their entire lives on or near the water, so swimming has become a skill they cannot live without, but how easy is it to swim when you are literally covered in feathers?

Birds that live on and around water are collectively known as water birds, but some are specifically known as aquatic birds. These are not the same as wading birds, or waders; whilst waders do rely on a water environment to live, taking their food from the water, they have different physiological attributes, the most obvious one being that they lack webbed feet. Waders instead have long thin legs with widely splayed long toes that help them walk through water easily and disturb as little of the sediment as possible as they move. There are also those birds who eat fish as their principal diet but they are only loosely considered water birds, such as the osprey or bald eagle. For today’s blog, we will focus on those birds that have to swim, as these species have developed specialized behaviors in order to do just that.

The majority of bird species will drown if they fall into deep water, as they lack the mechanisms required to survive, most notably their feathers are not waterproof and would quickly become sodden, dragging them down, their wings aren’t the right shape or be strong enough to use them as paddles, and their legs and feet lack the structure and strength to help them out.

These adaptations are what sets aquatic birds apart from all the other land-loving birds. But how do they actually move about in the water?

There are three mechanisms to enable a bird to swim: wing-propulsion, such as penguins and auks use to propel themselves beneath the waves; foot-propulsion, where birds like grebes and loons kick with their strong webbed feet to move forward; and plunge-diving, which gannets and boobies employ, using the combined forces of gravity and momentum to plummet into the water from altitude to catch their prey, before turning upright to resurface.

To get a better idea of how specialized these birds need to be, we’ll look at some specific examples to demonstrate the diversity required to live in a watery world.

As penguins are birds, they have wings, but technically, penguins can’t fly. Or can they? Most of us will have seen the fascinating footage of penguins zipping about underwater as if it didn’t exist, with only the thin line of bubbles streaming out from trapped air in their feathers giving away the H2O that surrounds them. Ungainly and slow-moving on land, plop a penguin in the ocean and you would not believe it was the same bird. Penguins spend around 75% of their lives in the water, often swimming at speeds of up to 25 miles per hour. Water is 900 times denser than air, but watch a penguin underwater and you will see they still flap their wings (like this footage here of King penguins off Macquarie Island, Australia) making the same movements as flying birds above in the air do. Penguin bodies are perfectly streamlined, their unique oiled feathers being flat and broad and interlocking to create a smooth surface, trapping air for warmth and buoyancy, also preventing the feathers from taking on water. But it is their wings that do most of the work, the bones having long ago fused in a straight line forming what are essentially flippers that they use to great effect. Penguins can swim fast enough that they can even launch themselves out of the water back on to land. Guillemots, auks, and razorbills also use their wings to swim.

Like many birds that live on the water like ducks, geese, and swans, loons have retained long wings that they still need to use to fly around in the air. Unlike penguins, therefore, if they were to try to use these to swim with, they wouldn’t get far as their design is simply not efficient against the density of water. Instead, they hold their wings tight to their bodies for streamlining and use their large webbed feet to glide around underwater as they hunt for food. Watch this amazing footage of loons in Ontario’s Lake Simcoe to see how they effortlessly steer and propel themselves with those remarkable feet. Cormorants, ducks, geese and coots all employ foot-propulsion in their swimming.

Gannets and other extreme divers

Some birds take things up a notch with high-speed plunge-diving, essentially gaining height beforehand in the air above, then angling themselves straight down, approaching the water at tremendous speeds. Gannets need to fly hundreds of miles out to deep sea to find the huge shoals of sardines to eat, which means they need long and slender wings to use their energy to best effect for these distances. Once they locate the shoals, they fly upwards to at least 30m before turning and plummeting back down, wings still outstretched, then at the last second tucking them tight to their bodies as they utilize momentum and sheer kinetic energy, puncturing the surface of the water at 100km/h.

However, they rarely dive any deeper than 10m, often arching their bodies upon entering the water at around 3m or so to harpoon what they can with their long sharp pointed bills before the fish scatter. They then use a combination of wing and foot propulsion to hunt, as can be seen here with these Cape gannets of Southern Africa. Kingfishers, terns, pelicans and boobies also use the same diving plunge technique, and whilst not as dramatic nor as high or deep as a gannet.

To finish with, we have to include dippers. Whilst another example of wing-propulsion swimming, we must mention these guys as they are the only aquatic songbird on the planet. Nesting near or above the clear running water of streams and rivers, these small birds have developed exceptional water-faring techniques.

You will usually spot them bobbing on rocks just above the waterline, but keep watching and they will soon paddle in the shallows, dipping their heads beneath to seek out crustaceans and other morsels. Although not webbed, dippers have exceptionally strong large feet that can hang on against currents and shifting ground underfoot. More rewarding larger food like minnows will live out in the deeper stretches; to reach these, dippers use their wings to make a fast, brief dive, and then they walk along the bottom of the waterway pecking at debris and pebbles, catching small fish. They are only under the water for a short time, but never far from it, and they never fly overland, choosing instead to follow the course of the river, zooming in a level and low dash between eddies and islands. They can also fly through waterfalls, swim in floodwater, torrential downpours, and white-water rapids. They are exceptionally strong, remarkable little birds, and no finer example of a creature beautifully adapted to just keep swimming, like their lives depended on it.