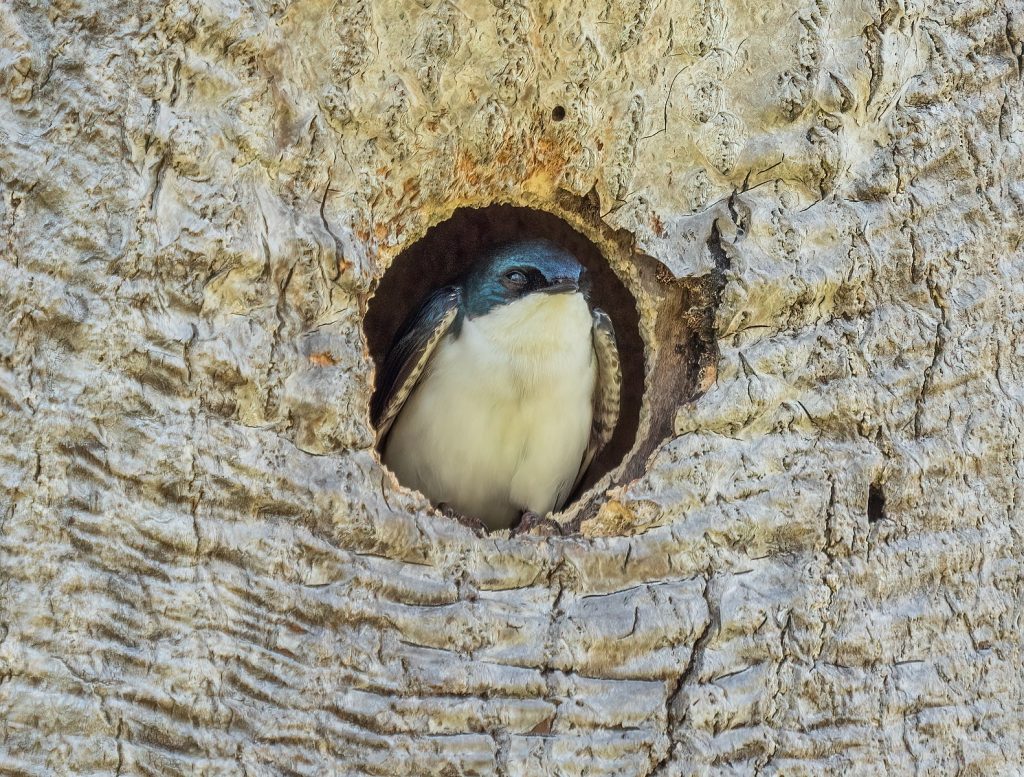 Breeding season for birds is a time of frantic activity using up a lot of energy to create that vital next generation. The stakes for species survival are so high that some birds resort to extreme tactics to keep their kids safe.

The signs of Spring are many and welcome – unfurling of new green leaves from bursting buds on branches, frogspawn shimmering in still sunlit pools, the nodding heads of daffodils and vibrant crocuses; and birds, lots of birds, singing. My word, do they sing. The dawn chorus is one of the most anticipated events in the human calendar, with many of us getting up way before our normal rising time to sit in the murky dark to await the waking of the birds.

But what we may perceive as a beautiful litany of rising and falling notes in a symphony of many parts is actually an awful lot of birds shouting at each other to either “get away from there!” or “get over here!”, depending on the persuasion.

Breeding season is gearing up, boundaries are being drawn and hearts are being won. Resident birds will have been surveying the area all winter and fending off their patch of land, and when the migrants arrive, things really heat up.

A symphony of many parts is actually an awful lot of birds shouting at each other.

Some male species arrive very early on to try and nab the best of the rest, and then others arrive day by day to make do with what is left. But finding a site is just the start; keeping the site and finding a mate to share it and then ensuring that the nest gets filled with eggs is still to follow.

All of this takes an enormous amount of energy, which means many birds have to defend those new lives, even to the death, for any of this to be worth it. But sometimes, they don’t have to go that far, they just need to make it look that way.

Protecting the nest is one of the most important things a bird will ever do, and given that there are over 10,000 species of bird in the world, it may come as no surprise that quite a few different ways to do this have developed over the years, and some of the most ingenious ways involve deception.

Research has shown that by leaving the apparent evidence of a crime at the nest site, namely a murder, other birds will avoid it, and escape the same fate. Two researchers known to each other but thousands of miles apart on different continents decided to test a theory both had suspected for a while. Having spent years already studying flycatchers, tits and other cavity nesters, Tore Slagsvold and Karen L. Wiebe had seen a pattern in nest building where some species were leaving white fluffy feathers at the entrance holes to their nests.

Setting up video cameras outside a range of species’ nests, they watched how birds reacted to nests whose hole edges were adorned with white feathers, white pieces of paper, and nothing at all. On both continents, the birds acted the same: those nests with nothing were entered very quickly after arrival, but those with white feathers were not entered immediately, with birds often waiting up to an hour or so before taking a look.

Perhaps most interestingly, those with white paper were not feared in the same way, leading researchers to conclude that it wasn’t the colour but the actual feathers that posed the greatest warning sign.

Some species were leaving white fluffy feathers at the entrance holes to their nests.

The presence of stray feathers, sometimes only just three, was enough to put would-be intruders off coming any closer. Whilst the majority of nests with white feathers were eventually inspected, a delay of even just a few seconds can give the original occupier the chance to return and defend if need be.

Killdeer, so-called because of its call rather than its ability as a great hunter, do not build much of a nest, laying their eggs among rocks or even in cracks of concrete. Predators don’t have to work too hard to find them, so the adults have adapted a behaviour to protect this makeshift nest. Due to their colouring, they can blend in quite well if they stay still, but if a predator notices them, they actually take off and land a few feet away.

Upon landing, they spread their tail feathers and drop their wings, giving the impression they have become incapacitated and unable to fly. This turns out to be enough to distract the predator from the nest site and focus on them.

Even though the eggs are exposed, their shell markings allow them to blend in exceptionally well, and their shape prevents rolling, even from a small shallow crevice. Once the bird is sure the predator is looking at them and approaching, they then miraculously heal and take to the air again, circling for a while until the threat has gone, and returning to the nest to carry on incubating those all-important eggs.

Oystercatchers also employ this fake injury method. Accompanied by high-pitched distress calls, the bird also flaps its wings dramatically to emphasise its predicament and its apparent desperation to escape. If the mate is present, they pretend to bombard the intruder and then land a short distance from their “stricken” partner.

This act is repeated a number of times further and further away from the nest, then when a safe enough distance has been gained in the hope the predator has either forgotten what they came there for or is disoriented enough to not recall the location of the first sighting, they both fly off to observe from the air and return when all is clear. Despite presenting themselves as easy targets, studies have found that in 90% of situations, the predator leaves without prey.

They act as if they have reached their true nest and make a big show of moving some stones about.

Other birds use similar mendacious tactics, like the banded dotterel, a shorebird that practices fake nesting. At the approach of a predator, they fly off, run a little distance and then they act as if they have reached their true nest and make a big show of moving some stones about as if turning eggs, ruffling up their feathers and hunkering down to keep those rocks warm.

Birds who visit your feeders will also use some of these methods to protect the nests, so keep a watch out in the breeding season and see if you can spot this activity going on. If you find any white feathers lying about, leave them out for some enterprising parents to use, and remember to stay back and let the next generation fight against the odds to grow up to learn these behaviours themselves.