What is a Big Year, and Why is it Fun? 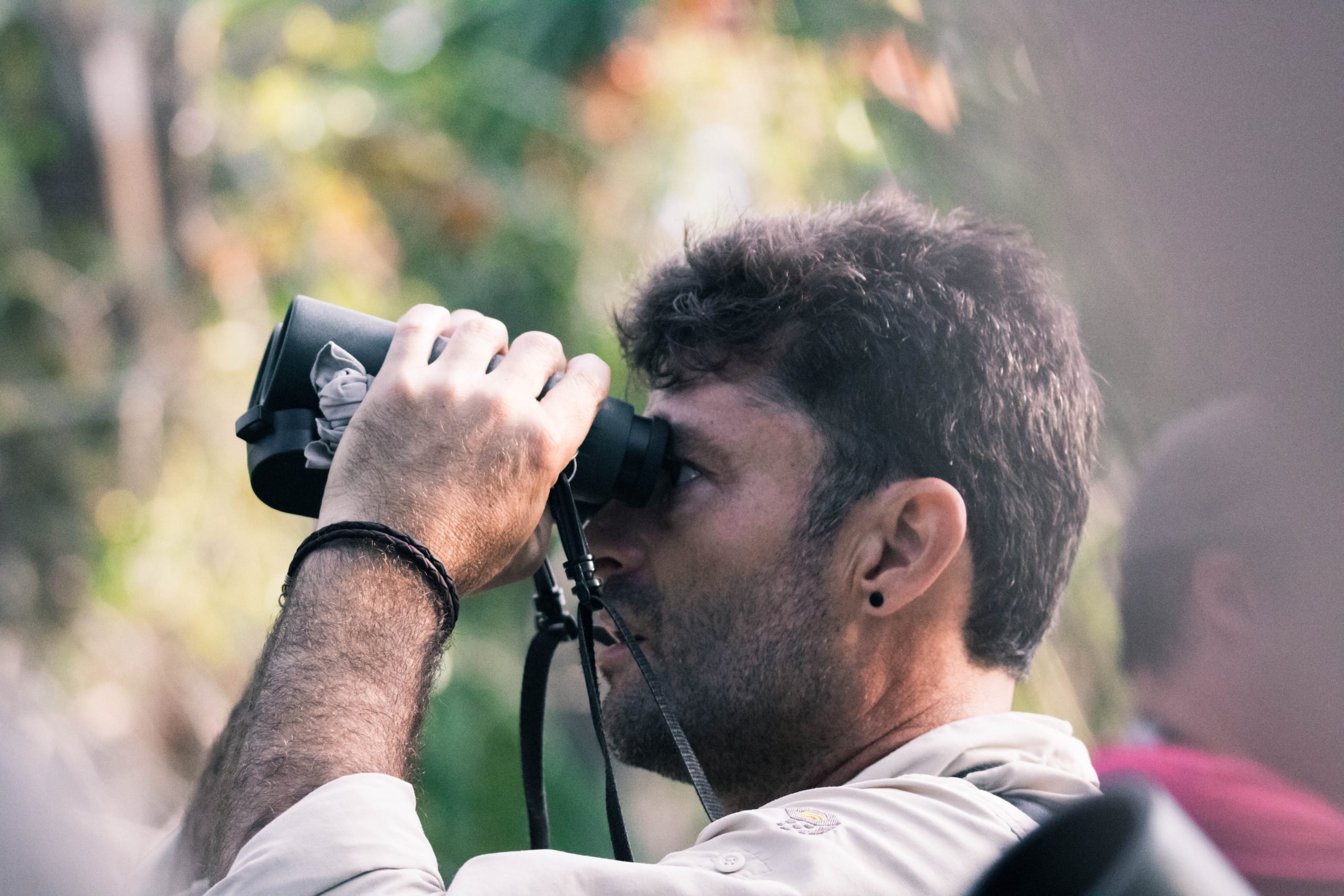 To many, including some of those who do it, it seems insane to spend a year traipsing the world looking at birds. But the experience can be more than just ticking off lists, isn’t always bad for the environment, and you can even do it where you live.

In 1934 the much-loved and respected US illustrator, educator and ornithologist Roger Tory Peterson released the first of many editions of his Peterson Field Guides in the United States, A Field Guide to the Birds. The first print run numbered only 2,000 copies, and within a week they had sold out: this in the middle of the Great Depression.

Those who studied birds did so with a shotgun and a corpse in their hands, rather than a book and a scope.

Until that point collectors and those who studied birds did so with a shotgun and a corpse in their hands, rather than a book and a scope. During the 4th edition print-run 50 years later, this time with 300,000 printed, news channels featured the release such was the popularity of the book.

One news commentator compared the guide’s creator to John James Audubon (whose The Birds of America, completed in 1839, is considered to be the one of the finest ornithological works in existence) with the line: “Like Audubon, he has studied birds all his life. Unlike Audubon, he has studied birds without shooting them first”. Peterson is credited with the early mobilisation of awareness of environmental concerns and movements, and bringing clarity of the world of nature to the layman’s home.

People took to birdwatching with gusto, armed with new knowledge that was easy to understand and put into practice, and found that there was not only exponential fascination and insight to be learnt from birds, but a classless and ageless friendship among fellow birders.

Communities of birders blossomed, information about species in different locales was willingly swapped, and soon enough tales of people actively seeking out as many species as they could via these networks of communities began to trickle in.

Guy Emerson was an American travelling businessman who was also an avid birder, and he would time his trips to coincide with the best seasonal birding opportunities, listing the species he saw as he traversed the continent. With his Peterson Field Guide in hand, in 1939 he claimed to have seen 497 species in a calendar year.

This unique achievement became the basis for what we now know today as the Big Year, a personal challenge that birders set themselves, to find and record as many species of bird as possible within a specific location over the course of a year.

The challenge has no monetary or physical reward, and the recording system is based entirely on honour. It’s a widely accepted unspoken truth that if you cheat in a Big Year, you’re only cheating yourself, and if you can live with that then so be it.

With the creation of the American Birding Association (ABA) in 1969 came a standardisation and regulation of this challenge, and now each Big Year officially begins at 12:00am on January 1st and ends at 11:59pm on December 31st of that same year (based on the local time of the location of the birder), and participating birders submit their lists at the end with photographic “evidence” if they have any, although it is not necessary.

If you cheat in a Big Year, you’re only cheating yourself.

The ABA originally defined the area in which birders can record species as the 49 continental U.S. states excluding Hawai’i (although this was added in 2016), Canada, and the French islands of St. Pierre and Miquelon, along with adjacent waters of up to 200 miles from land, or 100 miles to a neighbouring country, whichever was less.

Many birders tend to search in what is known as “the Lower 48”, the first 48 states to join the Union, with Alaska and Hawai’i coming 49th and 50th respectively. 2021’s official ABA checklist that birders work from and towards stands at 1,120 species, and the current record at the time of writing stands at 840, achieved by John Weigel in 2019.

Of course, anyone can also seek out and record any species from anywhere in the world too, and in 2016, of the officially recognised 10,800 or so species in the world, Madagascan-born Arjan Darshuis beat the previous years’ record of 6,042 species seen, and listed 6,852; perhaps that extra day of the leap year helped. Arjan’s record still stands, and you can find out more about his amazing travels here.

People have sold their homes and quit their jobs to fund and realise their dream.

Birders these days also seek out charities to help in tandem with their adventure, and Arjan managed to raise €37,000 that year in his continuing goal of €100,000 for Birdlife International’s Preventing Extinctions Programme.

Planning and executing a Big Year will often cost a lot of money: the flights, the accommodations, the food, the public transport, the car hires, the guide hires, the extra equipment, the camera batteries, the pairs of shoes... One estimate bandied about solely for a US-based challenge comes in at around $100,000.

There are people who view Big Years as a reckless and elitist extravagance, a waste of money and time, and for them it will be; but for others it is often a once-in-a-lifetime opportunity to do something they love to the extreme. Not everyone has the funds up front, or the time: people have sold their homes and quit their jobs to fund and realise their dream, or will do what they can on a shoestring budget, whilst others seek out sponsorship from travel, optics, or technical clothing companies, and sometimes with endorsements from charities, as with Arjan.

Air Miles to go before I sleep

The fact that you have to travel in a Big Year goes without saying; and often it involves flying. That has drawn out justified anger and disgust among the environmentally conscious.

Understanding and awareness of carbon emissions and aircraft fuel consequences has led to a welcome interest in two things: Green Big Years, presenting a whole new set of challenges that some thrive from, and a surge in popularity for carbon offsetting. This latter practice allows you to calculate how much carbon emissions you would generate with any form of travel that burns fossil fuels, and then pay that back by donating to officially recognised global environmental organisations.

Green Big Years are simply those where the participants get around on foot or on a bicycle, rowing boat, etc. In 2014, Dorian Anderson cycled 17,830 miles around the United States and managed to see 618 species, and raised $49,000 for habitat conservation charities. He also only got hit by a car once, without serious injury, which is also an amazing accomplishment.

Since the beginning of the pandemic, there has been a distinct lack of travel for obvious reasons. People have found ways to discover some form of relaxation in their immediate surroundings, which for many has been a discovery or a rekindling of their love of birds and birdwatching.

Binoculars and field guide sales have rocketed in the past twelve months. And this is where the other enjoyment for many comes in – getting to know where you live. The information that you can learn about the species in your own area is just as worthy as those in the rainforests of Brazil or the clear warm water bays of Vietnam.

One adored and admired advocate of local Big Year practice is the late Connie Hagar, a self-taught ornithologist dubbed The Bird Lady of Texas. Her diligent observation and recording of the species in her area year after year for 35 years led to that part of the world’s recognition in birding circles, and claims of her meticulous lists and journals drew scepticism swiftly followed by fascination from ornithologists around the US, among them Roger Tory Peterson.

She believed in not only listing birds but detailing as much as she could about them. Her migration reports on the many shorebirds that visited each year were unparalleled by other research scientists, and her work led to the addition of over twenty species to Texas’ list. Birdwatching to her was a way of giving back to the beauty of the world, a duty that should be embraced yet never taken for granted: “Looking on beauty brings tranquillity, and knowing precisely what you see demands discipline, utmost concentration and determination.

Because that’s what it is about, for so many people. Of course, the desire to see as many beautiful and rare birds as they can underpins the whole adventure, but ask anyone who has done a Big Year and you’ll hear that the stories involve the same core experiences: an opportunity to learn about the world and themselves, through developing planning or observational skills, or physical stamina and psychological perseverance; and to share not only good company but wonderful knowledge with people who just get it.