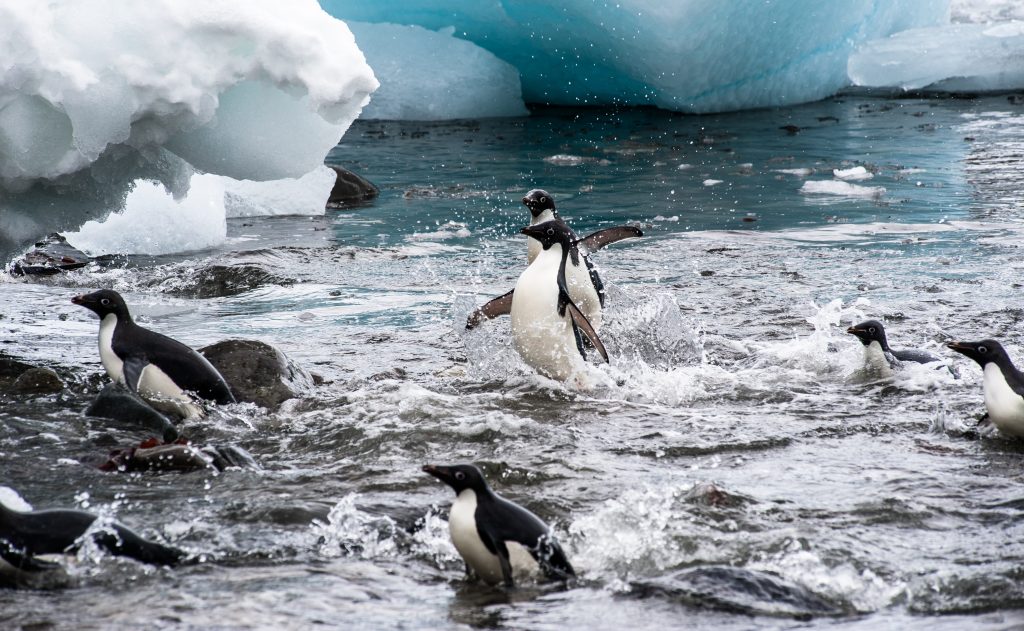 We’ve all seen the footage of howling freezing winds sending ice and snow hurtling into the faces of many a penguin, huddled tight in their thousands against the climatic onslaught. How do they live there, and why?

Birds are one of the world’s few species that inhabit virtually every habitat this world has to offer, except for the murky deep under the waves. You can find them on top of mountains, burrowed beneath in the sands of deserts, and living out their lives over and into the constantly moving blue of the marine world.

Some birds have adapted to occupy some of the world’s most inhospitable landscapes, and we can think of none so harsh than the frozen expanse of the Antarctic.

People often get confused as to where you can find polar bears and where you can find penguins. If you can already remember that you don’t find one where you find the other, (apologies, dear reader, our image above is a cruel trick), a good way to remember which is which is that the Arctic is named after the Greek for bear, arktos, which is derived from arktikos, meaning “near the bear”: this refers to the constellation Ursa Major, the Great Bear, only seen in the Northern Hemisphere, or Ursa Minor, the Little Bear, whose constellation contains Polaris, also called the Pole or North Star. Conversely, the word Antarctic literally means opposite (Ant-) to the north: ergo, there are no polar bears down south.

Whilst penguins only exist in the southern hemisphere*, we tend to solely associate them with the Antarctic, but of the 18 species of penguin in the world, only eight live there: emperor and Adélie penguins live exclusively on the ice shelves of the Antarctic Continent, and macaroni, gentoo, chinstrap, rockhopper, Magellanic, and king penguins live on the Antarctic Peninsula and the sub-Antarctic islands.

The other ten species can be found on every continent in the Southern Hemisphere, and one species inhabits tropical islands at the equator, the Galapagos Penguin**. Penguins are the only type of flightless diving bird that exists in the world today.

Antarctic penguins face no land-predators at all

Antarctic penguins only have to worry about seals and cetaceans eating them when they’re in the water. Had they large predators on land like the polar bear as well, we don’t think they would have lasted very long. Their chicks and eggs can be predated upon by other sea birds, but Antarctic penguins face no land-predators at all.Which is great news, considering that literally everything else goes against them.

When people find out about penguins living in the Antarctic, some tend to think “just why would you?” Obviously, it’s not the penguin’s choice, and as they can’t fly there is little prospect of that changing any time soon.

It is widely thought that around 125 million years ago the continent we now know as Antarctica used to be connected to the landmass known as Gondwana, the supercontinent thought to have comprised all the continents today that broke up and drifted apart. Antarctica never used to be cold, and when it gained a coastline the waters, almost like they are today, were abundant with resources.

Penguins have actually been found to probably have originated on the coasts of then Australia and New Zealand around 22 million years ago, and being diving birds they would head for the seas for food. Some took to feeding in the waters closer to the sub-Antarctic coastline and over time incrementally adapted to the increasing cold and distance of the continent. This also explains the presence of other penguins across the Southern hemisphere who adapted to their environments.

Whilst summers in Antarctica can hit a balmy 15°C / 60°F, the winters, running from late June to late September, can reach devastatingly low temperatures – in 1983 the Russian monitoring station at Lake Vostok recorded the world’s lowest ever temperature of -89.2°C or -128.6°F. There are no penguins at Vostok or indeed at the South Pole, no matter what the cartoons say, as these are too far inland. But at the coast it can still get to around -30 to -50°C, sometimes with 200km/hr winds known as katabatic winds – cold air surging down the icy mountain slopes increasing the chill factor to almost unbearable degrees.

Rather shockingly, emperor penguins have their breeding season in winter. The female will lay her single egg in May or June and then spend the next nine weeks at sea, feeding, but not before passing the egg over to dad. He rolls it onto his feet to keep it off the ground and then drops a specially adapted brood pouch over it.

Egg and adult penguin will both stay like that for around 70 days, occasionally rolling the egg to ensure uniform heating. The father does not eat at all during this time, but has to rely on the fatty layers of insulation beneath his feathers for sustenance. To survive this harsh period of their lives, male emperor penguins employ a tactic no other penguin uses – they huddle for warmth.

Emperor penguins have their breeding season in winter

Whilst their amazing coat of feathers, down and fatty layers help trap their core heat, the wind can blow those feathers apart and the air pockets of warmth are instantly lost. To mitigate this, they get together in their hundreds and often thousands and form a huge group, with up to ten penguins per square metre, facing inward, each still holding onto that all important egg.

Those on the outside eventually jostle for position to get inside, then those penguins pushed to the perimeter jostle, and so on, so that usually everyone shares the good and the bad. This results in an ever-morphing and shifting mass of torpedo-shaped bodies that still manages to cut heat loss by up to 50% and can create inner temperatures of 24°C / 75°F. These huddles can be seen from space, and during one 48hr blizzard a huddle was observed to move over 200m.

In some cases, it can actually get too hot for a penguin in the middle – a strange paradox for them. Temperatures can sometimes reach around 37.5°C / 99.5°F and when this happens the innermost penguins turn and face the group, outwards, creating a ring-shaped pocket of space like an eye in a hurricane.

This can ultimately break the huddle up; when those penguins get cold again, they regroup, and the mass moves on.

It’s often been thought that small downy feathers attached to their surface feathers, known as afterfeathers, are the ones that do all the insulating. Whilst they do play their part, it has been found that there are less of these than previously declared, a maximum of nine per square centimetre instead of the often randomly quoted figure of anywhere between 15 and 46 per cm2.

You could theoretically be dressed as a penguin in the future

More thorough studies of penguin carcasses found that the protection against the cold of the temperatures both in and out of the water was provided by a set of feathers beneath the surface, called plumules, of which there were four times as many as previously thought, and closer to the skin still, filoplumes.

These tiny structures were thought to only assist in flight, as they sit at the base of flight feathers and provide sensory information about when to move them and whether they are coming out.

It was said by some that flightless birds don’t have these at all, which we now know is wrong. It’s highly likely, although more study is needed, that these feathers also function as a means of waterproofing and insulation as well as streamlining for diving.

Various attempts to emulate the insulating prowess of penguin skin have never really hit the mark, as no-one had discussed these feathers before, but now there is a great deal of interest in the development of underwater suits for humans. You could theoretically be dressed as a penguin in the future.

During my research for this article, Google offered me the question “Can you hug a penguin?”

‍Having never thought of this but now intrigued as to the answer, I clicked on the link and found that not only will it feel like holding a slippery bag of wet sand, it’s best not to hug a penguin. Whilst I’m sure given enough determination you could, they will not like it and are very anti-social and don’t like contact. They will attack you with their clamp-like beaks and whack you with their surprisingly heavy and powerful flippers, which can easily result in fractured bones.

This information may help someone who was thinking about it: on your own broken head, be it.

*See ****As these islands straddle the equator, it is the only penguin that can be said to live in the northern hemisphere.